An Open Letter to the LDS Young Women’s General Presidency 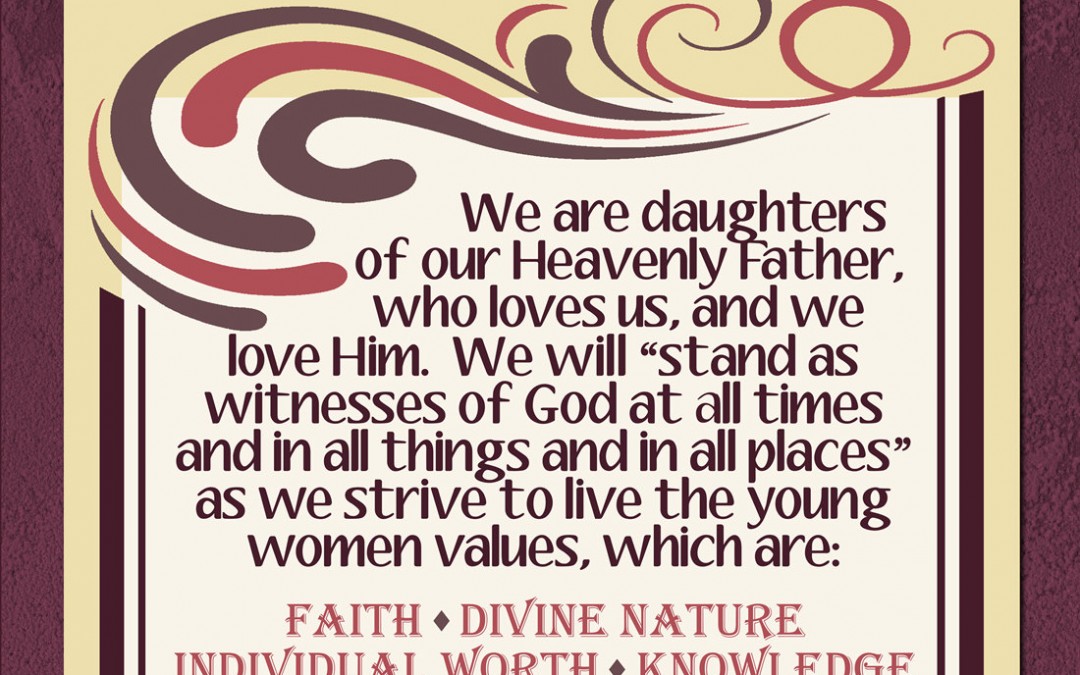 To Presidents Oscarson, McConkie, and Marriott of the General Young Women’s Presidency:

Once a month, the Young Women join us at the beginning of Relief Society, as we all recite in unison the Young Women’s Theme; which begins, “We are daughters of our Heavenly Father, who loves us and we love him.” However, each time we repeat this, I naturally find myself wanting to say, “We are daughters of our Heavenly Parents…,” and what a profound difference that would make if the wording could be changed, especially in terms of understanding the “divine nature” which we proclaim ourselves as women to reflect! In this open letter, I am going to present a case for the inclusion of Heavenly Mother from a scriptural and scholarly standpoint.  Forgive me if I sound “academic” in my presentation, but this very much part of my personal testimony, as my academic research reflects my deeply held personal convictions.

I recently wrote a paper for my doctoral studies program in which I examined the indirect influence of King Josiah’s reforms on the canonicity process of the Book of Mormon, as well as the Old and New Testaments. Drawing on the research of Margaret Barker, I discovered that in many ways, the Book of Mormon, although not accepted as canonical by mainstream Christianity, served in a corrective capacity to Josiah’s reforms, which were based on a Torah scroll, or the Book of the Law, found in the Temple. Upon reading the Book of the Law, Josiah initiated a series of religious reforms whereby which all references to Heavenly Mother (Asherah) were either taken out or destroyed. Josiah’s reforms included, but were not limited to, the smashing of altars and the destruction of the “sacred groves”  and “high places” devoted to Asherah worship. The “sacred groves” reference should sound very familiar to us as Mormons, as it is foundational to the Restoration.

Lehi, having lived in Jerusalem, witnessed these reforms as they were taking place, but also being aware of the apostasy (idol worship) of the people, knew he had to heed God’s warning and quickly flee the area before the Babylonians swept through and conquered the Southern Kingdom of Judah. Being himself of the tribe of Manasseh (not Judah), he was also keenly aware of the recent fate of his own people, as the Northern tribes of Israel had been carried away into captivity by the Assyrians. This is why Lehi and his family made the decision to flee to the New World, as we are now learning in Gospel Doctrines class.

There is recent archaeological evidence to suggest that before heading for the New World, Lehi ended up settling in what is now Oman on the Southeast cap of the Arabian Peninsula, which he named “Bountiful.” In a very recent Meridian article1 announcing an LDS-sponsored archaeological dig soon to be conducted in that same area, it mentions an outline of temple remains found there which correspond perfectly the dimensions of King Solomon’s Temple.This finding is consistent with what Margaret Barker points out concerning the disaffected priests who fled to the Arabian Desert because they “would not accept Josiah’s purge.”2 These findings add credibility to the claims found in the Book of Mormon.

Thus, it would seem Josiah’s iconoclastic efforts did not settle well with Lehi. In short, it seemed something was missing. I believe that special something was Heavenly Mother.

While King Josiah was careful to heed God’s command to turn “not aside to the right hand or the left” (II Kings 22:2), as a natural consequence of his sincere, yet misdirected cultic reforms, the connection with Heavenly Mother would be lost forever. Lehi’s vision of the Tree of Life was, in many respects, an attempt to recapture some of this lost imagery, “And it came to pass that I beheld a tree, whose fruit was desirable to make one happy” (I Nephi 8:10- italics mine). The symbolism is unmistakable, as Asherah was historically represented by a sacred tree or pole; the name Asherah itself, being loosely connected with the Hebrew word, “asher,” meaning “happy.”3

Margaret Barker further elaborates on the tree imagery as connected with Asherah, “The asherah removed by Josiah would have been a stylized tree, and the only stylized tree associated with the temple was the menorah, the tree of fire which was the tree of life, and therefore a symbol of the Lady who was being removed.”4  Barker reminds the reader that this imagery unmistakably echoes back to Moses’ burning bush theophany recorded in the Book of Exodus;5 however most would not think to necessarily link this imagery with the Divine Feminine, much less the serpent imagery employed in that same story, in addition to the “brazen serpent” later constructed by Moses for the purpose of healing – essentially an Asherah pole.6

It is extremely important to point out that Asherah worship in itself was never the problem, rather the real issue was mixing the worship of Her with that of other gods, like Baal, when She was to be worshiped alongside Heavenly Father alone. Lehi and his children had witnessed this mistreatment of Heavenly Mother before they left Jerusalem. This is the reason for God’s judgment and I believe, the reason Lehi’s son Nephi felt inspired to pen the following once his family reached the New World:

But behold, I Nephi, have not taught my children after the manner of the Jews, but behold, I of myself, have dwelt at  Jerusalem, wherefore I know concerning the regions round about: and I have made mention unto my children concerning the judgments of God, which hath come to pass among the Jews, unto my children, according to all that which Isaiah hath spoken, and I do not write them. But behold, I proceed with my own prophecy according to my plainness; in the which I know that no man can err; nevertheless, in the days that the prophecies of Isaiah shall be fulfilled men shall know of a surety, at the times when they shall come to pass.” (II Nephi 25: 6-7).

I firmly believe we are living in those times in which these prophecies are coming to pass. As Latter-day Saints – and as affirmed in the recent lds.org topics essay7 – we have a doctrine that is unique to all other Christ-centered denominations – that of our Heavenly Mother. Especially for women, the doctrine of Heavenly Mother provides the key to understanding our inherent “divine nature.” Bruce R. McConkie reminds us of this in Mormon Doctrine:

This doctrine that there is a Mother in Heaven was affirmed in plainness by the First Presidency of the Church (Joseph F. Smith, John R. Winder, and Anthon H. Lund) when, in speaking of pre-existence and the origin of man, they said that ‘man, as a spirit, was begotten and born of heavenly parents, and reared to maturity in the eternal mansions of the Father,’ that man is the ‘offspring of celestial parentage,’ and that ‘all men and women are in the similitude of the universal Father and Mother and are literally the sons and daughters of Deity.’ (Man: His Origin and Destiny, pp.348-355.)8

If you were to take a careful look at anything I have written in the past for Rational Faiths, you will see a consistent theme in my writing – that of my strong testimony of and closeness to Heavenly Mother. Heavenly Mother lives, and I believe She longs to be acknowledged in our lives.

For me, She is the representation of the ideal woman; She is caring and all-compassionate. I believe She knows and understands us and our struggles as women. She loves us. She testifies of Heavenly Father and of Jesus Christ. Even if I were asked to be silent about Her (and I have been asked on occasion), I could not. She is too real to me. She even seems to understand the limitations of my autism (which I do have – I’m high functioning). As I have mentioned in previous posts, I have seen Her- interacted with Her – on at least three separate occasions. I cannot – will not-  deny that.

If we are to truly understand ourselves as women, we need to see our inherent worth through Her eyes, but how can we do that if we continue to elevate Heavenly Father to the exclusion of Mother? Her time is here and we can be the ones to lead the way in revealing Her to the world, even if through something as simple as changing a few words in the Young Women’s Theme. This could make all the difference in the world for so many LDS women! This is why I humbly ask you to prayerfully consider changing the wording of the Young Women’s Theme to “daughters of Heavenly Parents.”

Revelation 12:1 “And there appeared a great wonder in heaven; a woman clothed with the sun, and the moon under her feet, and upon her head a crown of twelve stars.”

Moses’ “brazen serpent,” later called “Nehushatan” would also be smashed to pieces as a result of Josiah’s reforms. (see II Kings 18:4). The symbolism for us as Mormons is unmistakable- see II Nephi 25:20.