No Soup for You! Why Women Can’t Have the Priesthood 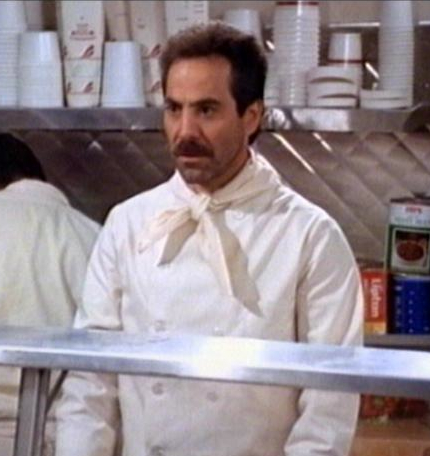 In the last General Conference, Elder Oaks gave a talk about the priesthood. During the priesthood session. To a group of men. Since then, many members of the church have claimed that his talk holds the answers to why women can’t have the priesthood. Now, whether or not the talk actually answers that question is debatable, but that is not the purpose of this post.

RB: Is it possible that the rules could change in the future as the rules are on Blacks ?

GBH: He could change them yes. If He were to change them that’s the only way it would happen.

RB: So you’d have to get a revelation?

GBH: Yes. But there’s no agitation for that. We don’t find it

Both Elder Oaks and President Hinckley are saying it would take a revelation to make this change, that they as men cannot change this on their desires.

Another phrase from Elder Oak’s talk that caused me some deliberation was “divinely decreed pattern.” When I first heard this phrase, I asked myself,  “Where is this divine decree?” I was focusing on the adjectives of this sentence and not the noun – pattern. After recognizing this I had my big aha moment.  I knew why women couldn’t have the priesthood!

First, tradition. As explained by Ally Isom, a representative of the LDS Church, during an interview with Doug Fabrizio, there is nothing written in our doctrine that says women can’t have the priesthood. Anywhere. So this “pattern” Elder Oaks describes is simply tradition. Because we have always had an all-male priesthood, women can’t have the priesthood. To question this “pattern” would be like questioning past leaders and traditions.

Second, status quo. The majority of Mormons “know” that the LDS Church is the one true church. They also think that the Church established is perfect. Many will testify that it is led by Jesus himself. “The Church is perfect, but the members are not.” So the status quo of the Church is often mixed with perfection. For someone to come along and show that improvements could be made can easily be seen as blasphemy.  It almost gets the response, “How dare you – don’t you know this church is led by Christ himself?!” Sometimes we are quick to forget our Articles of Faith: “…we believe that He will yet reveal many great and important things pertaining to the Kingdom of God.” And remember when Elder Uchtdorf said that the restoration is still occurring? (Are You Sleeping through the Restoration, General Conference, April 2014)

Another perfect example of self-examination is the Last Supper. Think back when Jesus told his apostles that one of them would betray him. What was their reaction? Did they say:  “Who here is stirring the pot” or “Who here is asking uncomfortable questions”?  No of course not! “The response was immediate self-examination. “Surely, not I?” they asked (Mark 14:19). They did not point fingers at each other but instead looked inside themselves.”(The Challenge of Honesty, Frances Lee Menlove, 137-138)

“As people of faith, we have a moral obligation to raise difficult questions.” (The Challenge of Honesty, Frances Lee Menlove, 137) I believe one of those difficult questions is why not? Why can’t women be ordained? May we own our struggle and overcome the stigma of tradition and the status quo. If you think Jesus came to reaffirm the status quo, then most likely you have made Him in your own image and put Him in a tiny box. Gracie Allen said, “Never place a period where God has placed a comma.” (The Challenge of Honesty, Frances Lee Menlove, 123)