No Longer Quivering Before the Patriarchy 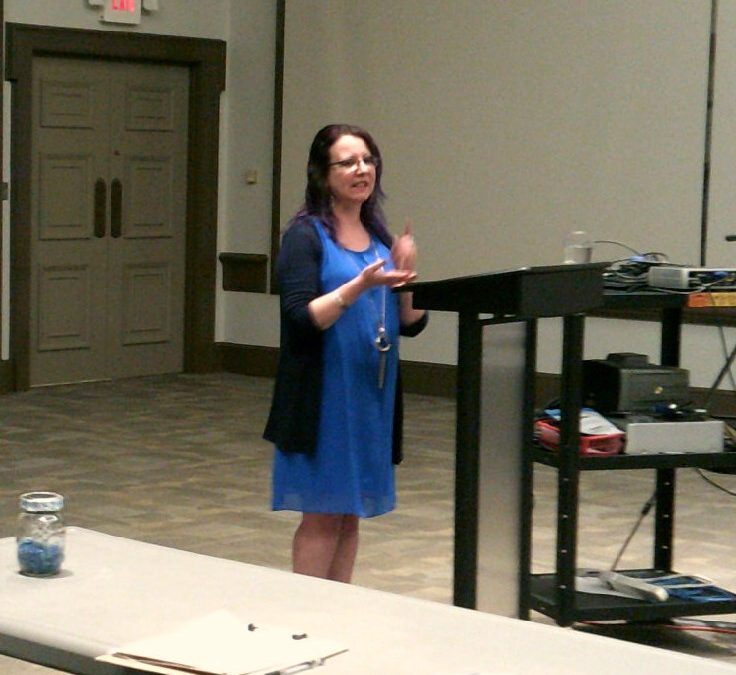 Imagine having to submit yourself to a form of Christian Patriarchy minus “the Priesthood,” and you have the beginnings of Vyckie Garrison’s story.

“I am not really good at submission,” Garrison explained to the Charlotte Atheists and Agnostics group at the Concord Library in North Carolina on April 13.

And yet Garrison, who was not raised in a Christian household, spent many years doing just that – submitting to her husband and the spiritual male authority figures in her life.

Garrison describes her life before accepting Jesus as “a big old mess,” by in large due to the way she was raised. After getting married at sixteen “to start my own mess,” as she explained, she turned to Christian radio through which she “got saved” (an evangelical expression meaning to accept Jesus and “Lord and Savior”) a year later. She credits the “Bible Answer Man” (Walter Martin) for offering his profound wisdom in those early years.

Garrison ended up in what would later come to be called the “Quiverfull Movement.”

If you are not familiar with the Quiverfull Movement, just think of the Duggars. That name should say it all.

But to Garrison, it was just simply a conservative Christian home school group that would help her know how to raise her seven children in the fear and “righteous admonition” of the Lord.

The Quiverfull Movement is derived from the following set of verses: “Lo, children are an heritage of the Lord; and the fruit of the womb are his reward. As arrows are in the hand of a mighty man; so are the children of his youth. Happy is the man that hath his quiver full of them: they shall not be ashamed, but they shall speak with the enemies at the gate.” (Psalm 127:3-5).

Basically, the Quiverfull movement advocates divine family planning, in addition to heavy-handed Patriarchy – “I drank the cool aid to the very bottom,” Garrison explained, “and got the dregs.”

And even through she felt she was “doing everything right,” she admits it was “very hard, very demanding. I sucked at homeschooling.”

Still, despite the fact that her family was beginning to look “pretty Duggar-like” she admits that things were “not adding up.”

After a painful decision to have her husband’s vasectomy reversed and a very difficult home birth, Garrison admits, “secretly I didn’t want more kids.” But for her, the sacrifice was real. Her “life verse” during this time became Job 13:15, “though he slay me, yet I will trust in him.”

Garrison describes the philosophy of the Quiverfull movement as “instant joyous obedience”- “JOY being an acronym for “Jesus-Others-Yourself.”

Garrison went on to describe the Christian home school conventions she would attend and the hundreds of thousands of dollars spent at these events on creation science and “revisionist history.” Popular books “selling this lifestyle” included big names in the Quiverfull movement like Nancy Campbell and the highly controversial discipline methods of Michael and Debi Pearl, co-authors of To Train up a Child.

Education in the Christian home school movement focused on entrepreneurial skills for men and domestic skills for women, since the highest aspiration for a woman is to someday become a wife and mother. Higher education for women is discouraged.

Throughout her involvement in this movement, Garrison noted the way the core beliefs served to reinforce narcissism in the men- “the men are miserable too. It really screws with the man,” turning him into a “narcissistic baby.” Now he can justify his need to control his family with “chapter and verse.”

Through the influence of her free-thinking uncle, Garrison would eventually see the Quiverfull movement for what it was and plan her “escape.” She would soon leave her husband, and come to the profound realization “it’s alright to not be a martyr all the time.”

For me as a feminist Mormon and convert of six years from an evangelical background, one of the most profound moments in Garrison’s talk came when she described being in a home school group and hearing the men in the next room talk theology. She found herself wondering what they were talking about and wishing she could join them.

But even more sobering was the thought that if I had stayed with my ex-boyfriend, I might have ended up in the same situation. I shared this with my husband that same night after we left her talk.

A couple nights following Garrison’s talk, I had a powerful dream I was sitting in the lobby of the Temple. But because of Patriarchy, I could go no further.

This is what Patriarchy does to women. And I too clearly “suck” at submission.

I believe there remains a “glass wall” separating us women from the men. Church does such a good job at perpetuating these feelings of inferiority.

It’s very sad it has to be that way.

Vyckie Garrison runs the blog “No Longer Quivering,” dedicated to the purpose of helping other women escape spiritual abuse. She has been featured on CNN Tonight, Inside Edition, The Secret Lives of Women, and the Joy Behar Show, among other television and radio shows and related podcasts.