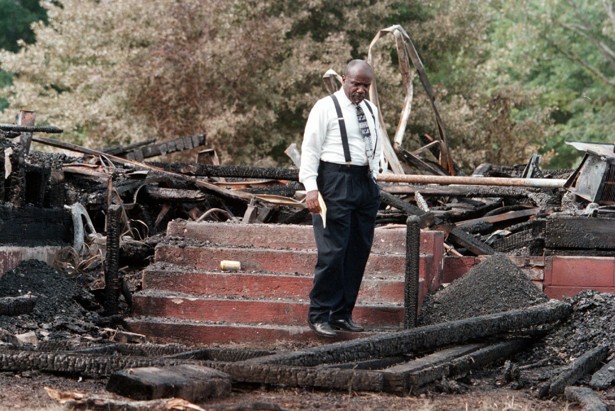 I have tried to start this piece dozens of times, each one coming up short. The thing is, there is no easy or comfortable way to confront the reality that is the terrorism sweeping black churches in the United States.

This latest wave all starts with the Emanuel African American Methodist Episcopal Church and one Dylann Roof. On June 17th, 21-year-old Dylann Roof sat for an hour, watching a bible study take place only to open fire on 9 innocent men and women, solely because they were black.

The Emanuel Church is a historic church in Charleston- it has been outlawed, has survived hurricanes and earthquakes. It holds the pleas and stories of hundreds of thousands of black Americans. The majority of the press covered this in the way they usually do- with a parade of Roof’s childhood pictures, explanations by friends and family that he was quiet and would never hurt anyone, and a quickness from white people to distance themselves from the term terrorism by labeling Roof as insane, or mentally unstable. This is not new.

But in the wake of Charleston, more churches started to burn- the current count is 8 and the silence is astounding.

On June 22nd, College Hills Seventh Day Adventist Church in Knoxville, Tenn., it was burnt, along with a van outside the property. This was classified as an act of vandalism, and not a hate crime.

On June 23rd, God’s Power Church of Christ in Macon, Ga. Another predominantly black church was completely gutted in a fire started before dawn. The church was considered a total loss.

On June 24th, Briar Creek Baptist Church in Charlotte, N.C. and Fruitland Presbyterian Church in Gibson Country, Tenn. both were burnt. In the case of Briar Creek, it took 75 firemen over an hour to put out the fire with two being hospitalized for heat exhaustion. It was ruled an arson. As for Fruitland, the fire that consumed the church was ruled to be caused by lightning.

On June 26th, Glover Grover Baptist Church, in Warrenville, S.C., and The Greater Miracle Apostolic Holiness Church in Tallahassee, Fla. Were both burnt to the ground and both still under investigation. No cause has been determined for either one.

On June 27th, College Heights Baptist Church in Elyria, OH, was engulfed in flames, causing over 1 million dollars in damages.

On June 29th, Mount Zion African Methodist Episcopal Church in Greeleyville, S.C. was burned, 60 miles from Charleston. The fire is still under investigation, and no cause has been determined.

All of these churches have predominantly black congregations. Since 1956, there have been at least 91 violent attacks against black churches, with the last 8 taking space in the span of 10 days. So, where is the outrage? Where are the cries for religious freedom? Black places of worship are literally being burnt and black people worshiping are being massacred and the absolute silence from those clamoring for the right to practice religion is deafening.  Does freedom of religion only apply to causes that have been skewed towards whiteness? How is it not religious oppression to have your place of worship obliterated or to fear for your life while communing with deity? How little do we think of God’s children if we cannot lend a hand, a shoulder, a voice to cry out against the oppression of worship bring faced by our black brothers and sisters?

I can’t think of any group being actively and visibly persecuted in their spaces of worship (aside from Muslim’s and Sikhs, because, again, white supremacy can’t differentiate between brown folks) and yet there is nothing. An article about better observance of the Sabbath, without thought of those who fear for their lives when doing so and the chirping of crickets.

I want to have space in my heart to think that the church really is looking for religious freedom, but considering the fact that not even a word has been spared for our good black brothers and sisters, I am reminded that it is a white and bigoted hill we are willing to die on. Regardless of all the persecution that we claim to face, we are hard-hearted and slow to aid those of us who are terrorized in their sacred spaces. How persecuted can we be when our chapels will still be there this Sunday, cloaked in the aura of whiteness, silent to the outside world?

And yet, we could learn. Muslims are responding to the terror, by helping raise money to rebuild those very same churches.  While we debate whether to turn a plot of land into a small city, others are ensuring that worship may take place and God’s voice can be heard. What a shame it isn’t us.