The Trump Soundeth Long and Loud at Liberty! 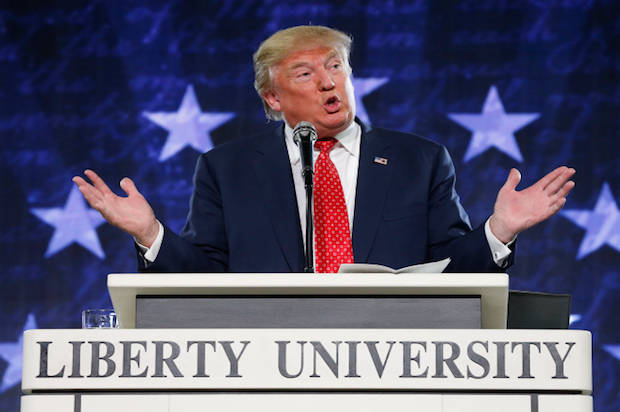 Donald Trump was recently invited to speak at Liberty University in Lynchburg, Virginia by Chancellor Jerry Falwell, Jr., and his delivery wasn’t all that convincing, at least from a scriptural standpoint.

Founded in 1971 by televangelist Jerry Falwell, Sr., Liberty University caters largely to the evangelical community.  And although the university claims to not endorse any particular political candidate, they are known for bringing in famous politicians to speak on a regular basis such as Bernie Sanders back in September, whose “just society” message was received very differently from that of Trump.

The reception of these two candidates spoke volumes, as Trump received a warm reception from both Chancellor Falwell, (Jr.) and the audience, while the audience mildly clapped for Sanders. Following a glowing introduction of the candidate, Falwell praised Trump for his unassuming philanthropy by quoting Matthew 7:16, “by their fruits, you shall know them.” He then compared Trump’s rather candid statements with that of the Savior; “Jesus made statements so unpopular; he was crucified for it.” Oddly enough, Sanders had quoted a different verse from Matthew 7; “the Golden Rule.” It didn’t have the same level of impact.

Although I will admit I have not read The Art of the Deal, I highly doubt it is second to the Bible, as Trump claimed in his speech.

“Everyone wants to come here!” Trump declared in a pandering statement, throwing in a quote from Two Corinthians 3:17, “Where the Spirit of the Lord is; there is liberty….That’s the whole ballgame,” (Yes, he said “Two Corinthians,” not Second Corinthians!). And while Sanders also quoted from Scripture (Amos 5:24 and Matthew 7:12), he openly admitted he was “not a theologian” and had divergent views from that of the university.

As I was listening to Trump’s speech, I was appalled not only by Trump’s obvious mishandling of Scripture, but also the way Falwell (in his introduction) continued to draw comparisons between Trump’s business practices and the entrepreneurial spirit of the university; a campus that prides itself on “treating students like customers,” as if his (along with Trump’s) business model is consistent with that of the biblical model – which would seem to include rejecting those who don’t agree with their particular brand of Christianity.

And sorry, Mr. Trump. Not everybody wants to go to Liberty.

You see, about a year ago, I applied to Liberty as a Mormon, and was rejected. It’s a long story, but it was for a doctoral program in theology.

At the time I was following a prompting; feeling the clear leading of the Spirit and having both the endorsement of my Stake President and my then Bishop. It was my way of making peace with my evangelical background. And although the rejection letter did not state the reason for rejection, I believe it is obvious why.

No worries, though. I did get accepted elsewhere and am happily working on my doctorate.

But even as I was in the process of applying, I found their business practices to be very shrewd. And admissions didn’t seem to have their act together. Communication wasn’t that great and It felt like they were more focused on meeting their enrollment quotas than addressing the concerns of their “customers.” Their endless string of automated messages proved misleading. Even after getting rejected, I still receive phone calls and the occasional letter from them asking why I haven’t registered for the new semester! Throughout the whole enrollment process, I felt like just another number lost in their system. Is this a good business model? And with the “good ol’ boys” camaraderie we saw displayed in the interchange between Trump and Falwell; the former who just received the official endorsement of Falwell as of yesterday.

Something about Trump’s obvious “panderizing” does not set right with me. Does Trump really need to pretend to be an expert in the Scriptures just to convince evangelicals to give him their vote? To me that seems dishonest. And it seems wrong on Falwell’s part that he would claim on one hand to not endorse a particular candidate, and then in the next breath speak of Trump as if he is secondary to the Savior.

And while I am not here to question Trump’s personal commitment to his Presbyterian values, it would seem his “exegetical methods” are not that highly developed to be speaking in front of a group of Bible college students in any official capacity – but I think the students knew that judging from their laughter.

For instance, his use of II Corinthians 3:17, obviously a play on words in connection with the name of the university, was taken way out of context. Writing to a church that is still riddled with internal problems and strife, Paul is trying to encourage the people to embrace the spirit of the law, not its trappings; the spirit of the law being something “The Liberty Way” (the official code of conduct for the university) has been widely criticized for not embracing in terms of its strict rules. And interestingly enough, Trump was later accused of violating the rules of “The Liberty Way” in his speech with his use of the word “hell;” considered obscene language by the college.(1)

In the final analysis, people are still people and actions speak volumes. And I find it sad that a presidential candidate would have to stoop to that level of catering to the Falwellian power-base of evangelical Christianity as if he were one of them. To me, this is the classic sign of a wolf in sheep’s clothing and a strong indicator that politics and religion mix like oil and vinegar.