A Lack of Knowledge 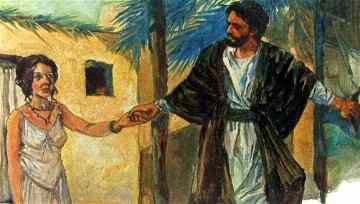 Hosea 4:6 says, “My people are destroyed for a lack of knowledge: because thou has rejected knowledge, I will also reject thee, that thou shalt be no priest to me: seeing thou hast forgotten the law of thy God, I will also forget thy children.”

In this verse, Hosea is condemning the Northern Kingdom of Israel for their rampant idol worship. Many people assume Israel’s main sin was Asherah/goddess worship, but that is only part of the equation. Israel’s real transgression of the “law of God” was, in essence, committing “spiritual harlotry” by linking Asherah to Baal worship. In doing so, they were profaning all that was sacred to God – namely, his Wife.

Let’s examine these scriptures in context….

Keep in mind Hosea was given a rather odd prophetic assignment. He was asked by God to marry a woman of rather “questionable” reputation, and it is clear he was deeply in love with her. Could we even say, lovesick? However, try as he did to keep her in his arms, he could not.

All throughout the Scriptures, we see scattered references to Heavenly Father as a “jealous God” (see Exodus 20:4-5, Deut. 32:16). What does this mean? It seems no one knows what to think of this verse, let alone how to interpret it. Does God have quasi-human characteristics? Why would the God of the universe be described as jealous? What could God possibly need that he doesn’t already have? Perhaps Hosea holds the key to interpreting this passage – for God, like Hosea, is a jealous husband – deeply in love and extremely protective over his beloved Asherah, who the Israelites keep “whoring out” to Baal.

All throughout the Hebrew Bible, there is an ongoing competition between Baal and the Hebrew God/Heavenly Father. No sooner than the Israelites leave Egypt, they are found worshipping the golden calf, representative of the Canaanite god Baal- just in time for Moses to come down from the mountain carrying the Ten Commandments. This ongoing power struggle continues all the way up until Elijah’s infamous battle against the prophets of Baal on Mt. Carmel. – Competition over what? Or who?

By the time we get to Hosea, it is only a matter of time before the Israelites will be carried off into captivity by the Assyrians for their unholy alliances with the surrounding nations. These unholy alliances were often tied in with Baal worship, a Canaanite fertility cult characterized by lewd sexual practices and “sacred” prostitution. Often the term “priestess” was confused with “prostitute” for that very reason, referring here to “sacred prostitution.” Is it possible Hosea’s wife Gomer was not a “harlot” or “prostitute” in the traditional sense, but a priestess of Asherah?

Everyone is familiar with the prohibition in Deuteronomy 32:16, “They provoked him to jealously with strange gods, with abominations provoked him to anger,” but very few people pay attention to the preceding verses which provide the context for this verse.

“As an eagle stirreth up her nest, fluttereth over her young, spreadeth abroad her wings, taketh them, beareth them on her wings: So the Lord alone did lead him, and there was no strange god with him.” (Deuteronomy 32:11-12). Notice the feminine “Mother Hen” imagery employed here. It is only later they “sacrificed unto devils” (vs. 17 -Baalim?) and turned the Sacred into something profane.

I believe there are clues in the Hebrew Scriptures that allude to Heavenly Mother’s presence, even if she is not specifically mentioned. The Shema in Deuteronomony 6:4 proclaims that God is “one.” “Echad” or “one” implies unity, as in marriage. Compare with Genesis 2:24, “…and they shall become one flesh.” This is one of the great mysteries of the Bible because it is reflective of God’s image – the oneness of our Heavenly Parents. This is reflected all throughout the book of Song of Solomon- a song of oneness in the truest sense.

I just finished reading The Lost Gospel by Simcha Jacobovici and Barrie Wilson (Pegasus 2014), and they made reference to this “great mystery” of marriage as recorded in Paul’s letter to the Ephesians. Ephesians 5: 31-32 speaks to this “great mystery,” but then goes on to spiritualize the mystery by saying, “but I speak concerning Christ and the Church.” (vs. 32b)

According to Jacobovici and Wilson, Paul was speaking to a faith community that would have been familiar the alleged marriage between Jesus and Mary Magdalene (which I see as consistent with this line of thought) and would have associated Mary with the pagan goddess Artemis. Fearing this “pagan” linkage as a former Orthodox Jew, Paul went on to further “spiritualize” these popular associations, moving them farther away from their original meaning – and in doing so, obscuring the true and complete image of divinity. As a result of this, our Mother in Heaven was further written out of the Scriptures and women everywhere have forgotten what it truly means to be daughters of Heavenly Parents.

It seems as Mormons we are also afraid of this, and so we tend, not only to over spiritualize, but in doing so, to overlook- and in essence, stamp out- our Mother in Heaven. President Gordon B. Hinckley is quoted as having said, …”because of the activities of a few who evidently are seeking to lead others in the paths they are following…I regard it as inappropriate for anyone in the Church to pray to our Mother in Heaven” – (Gordon B. Hinckley, “Daughters of God,” Ensign Nov. 1991). But at the same time, I do not believe it has to be this way. I believe it is entirely possible to have a biblically (or scripturally) grounded belief in the Goddess. And while I have considered the possibility that the Goddess of the Bible has been called by different names cross-culturally, I have noticed that anytime anyone mentions “the Goddess,” the first images that come to mind are “pagan” in nature. It is the same with the word “priestess.” Why is this?

While I would never encourage linking Heavenly Mother with other goddesses like the terrifying Hindu goddess Kali, I think there is an answer to this dilemma. It is important whenever we acknowledge Heavenly Mother as the Goddess of Israel that we keep Her within Her proper biblical context- as the wife of the Hebrew God- and not to mix Her with the practices and traditions of other belief systems (no matter how seemingly innocent). This is what got Israel into trouble in the first place- and in doing so caused Heavenly Mother to be further removed from the Biblical tradition. (which in turn, diminished the power of Her Priestess-hood, which I believe at one time existed.) In doing so, we will redeem, not only Asherah, but the fullness of the Priesthood itself, which at the moment is one-sided – and as women we wonder why there is a disconnect? We’ve been told we can’t pray to Her because She is “too important” or needs to be “protected.” However, in honoring Her, we simply cannot afford to ignore Her altogether.