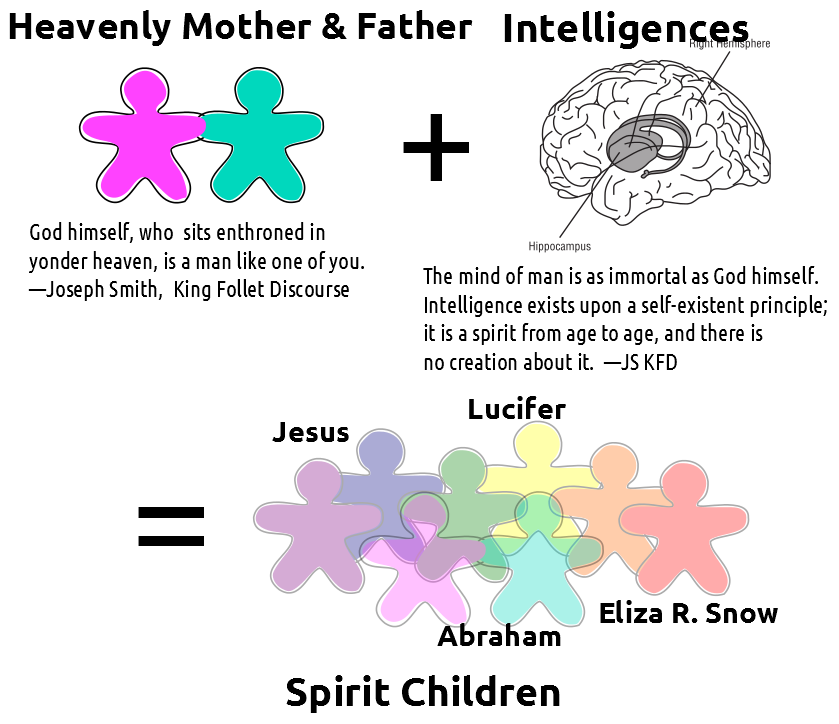 Omniscient, omnipotent, and omnipresent. Dogma in our modern understanding is pretty much just another way of saying “arbitrary assumptions”. According to a Pew Research Foundation survey on religion (see “Interpretation of Religious Teachings”), 54% of Mormons believe that there is only one correct way to understand our religion. Maybe the wording of the question skewed the results, but it would apparently surprise over half of Mormons to discover how many different assumptions we make about God (or at least how many are authentically Mormon).

Most Mormons deny the omnipresent God in favor of one with a physical body, but allow for omnipresence in hearing and answering prayers. Many Mormons think of God as literally knowing everything that can be known. Others are unsure of His absolute foreknowledge, particularly of human choices which are governed by sacred agency. Many Mormons think God can do everything that can be done, but some see Him as at least self-limiting in His refusal to interfere with agency, and possibly limited by the laws of existence—how else could God cease to be God? Brigham Young at least viewed God as continuing to progress in knowledge and power (see Perfection and Progression), but the modern orthodoxy expressed by some prominent leaders identifies this as a heresy.

If those who believe in a limited God are correct, what is the nature of the limitations? If God is limited in space and time, where and when is He limited to? If limited in knowledge, what does that mean for my life? If limited in power, is that only limited in some abstract sense? God is limited, but in the practical, everyday world His power is so great that it is effectively limitless? What if we introduce our new understanding of sizes of infinities to our thoughts about God? Then God’s power and knowledge can be infinite, and he can still not know everything. Think about that for a minute. 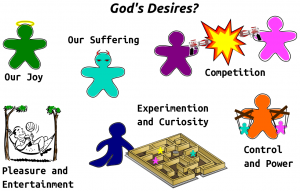 What does God really want with the universe and with us? Did he make it for our immortality and eternal life? Is it all an evil joke? Does He enjoy competition and war? Are we here for God’s entertainment and pleasure? To satisfy His curiosity? Does He control every detail that happens? Or is God running some vast simulation or experiment?

What do you think God wants with the universe? Is it there for His fun and experimentation? Is it there to raise up beings who will spend eternity praising him? Is it there to make more Gods? Is it there independent of God, and He’s just making the best of it? Every one of these is a belief espoused by major groups of people, and every one of them can seem pretty silly. Which ones are right? Do we have to choose among them? Are none of them right? Are none right because there is no God, or because there is another choice we haven’t thought of? Is this life a test, an inevitability, a progression, an accident, or a combination of the above?

Is there one God, or are there many? If many, how are they organized? Did God have parents? Are we Gods in embryo? Are all Gods alike? If not, in what ways do they differ? If we are God’s spirit children, how exactly are spirit children made? If we are to become Gods, exactly how does that happen? If God is part of a family, exactly how does He interact with His siblings? His wife? His parents? His grown up children? If you haven’t asked these questions before, or if you’ve dismissed them as of little relevance or too speculative, I don’t have a problem with that. But sometimes we support decisions that have real world consequences based on unexamined assumptions. For example, as Mormons most of us believe Heavenly Father and Heavenly Mother have spirit children in some way. Most of us also believe that Heavenly Father does essentially all of the ruling and interacting with humans. Christ does some, too, but we have essentially no knowledge of Heavenly Mother being involved in any of it. So what do we know Heavenly Mother does? Have children. It’s the only role we know of confidently. So what do women Gods do? What do they not do? So what should women humans do and not do? This is just one example of how “not making assumptions”, or going along with generally absorbed, unexamined assumptions influences our day to day, applied understanding of gender roles. In this case, refusing to speculate about unknown eternities suggests that one should re-examine earthly gender roles considering both what has been revealed and what has not been revealed.

If God exists, does He act here on earth? Does He influence nature? Does He communicate with people? Does He do it face to face, with a voice, through thoughts and feelings, or some other way? Does He call specific representatives, or can anyone have access to God? Or maybe both? Are there limits to what or how God communicates? Does He reveal scripture perfectly, or according to our language and understanding? Does He have only one chosen people, or many? Does He “save” people? Who? How? What does it mean? 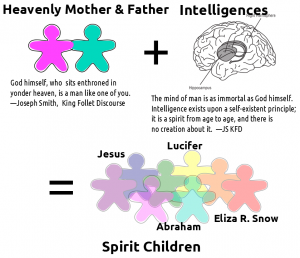 How are spirit children born? What does Heavenly Mother do?

If you are reading this blog, you probably have opinions on most, or all, of these questions. Your opinions may be straightforward, or highly nuanced. They might be very certain, or tentative. They might come from study, or from personal experience. Whatever your opinions, can you prove them? Can you objectively demonstrate them to any other intelligent adult without resorting to personal testimony? I can’t. Yet I allow these assumptions to influence how I treat other people. They give me reason for doing missionary work, or for not doing it. They shape how critical or how accepting I am of different religious traditions. They shape the moral messages I hear when I’m reading the scriptures or listening to General Conference. My unprovable assumptions make me a better or a worse person in specific interactions with my family and my neighbors.

Do you ever do arithmetic? Did you know you were making assumptions the last time you added 3 and 4? It took some really smart mathematicians to define those assumptions, and defining basic axioms of mathematics is a work that continues. It shouldn’t surprise us if we have a hard time identifying all the assumptions we make about much more complicated subjects than arithmetic. It also shouldn’t surprise us if our assumptions aren’t as strong as those in arithmetic. But if it is important to you to believe in a logical God, and you are sick of being called irrational by atheists or sceptics, it might be worth your time to think about just what you assume and why. If you are tired of being criticized by conservative or liberal Mormons for particular beliefs you hold or actions you take to support those beliefs, you might benefit from finding the assumptions that underlie your beliefs. Maybe you will change some, or change some back. If you don’t like how critical you are of people who think differently than you, you might try identifying your philosophical assumptions, and theirs. Maybe it will help you see that both of you are doing your best to make the world better, and you might see that you can both be rational even though you disagree.

While the assumptions underlying arithmetic are strong and widely accepted, they are nonetheless present.

Examining our assumptions seems to be a never-ending task. I identify one, then a while later find a subtler one underneath it. For me it’s both a game and intensely serious business. In working on it myself, I’ve found that I’m not as dumb as some people would have me believe, that I did believe some pretty stupid things, that I probably still believe some stupid things, that I probably believe some profound truths that I haven’t recognized as profound, yet, and that there is more richness to Mormonism than I had seen before. Not every moment of the trip is fun. I’ve had some painful shifts of viewpoint, a sometimes annoyed wife (as I talk about my obsession), and a harder time sitting through some church meetings. But on the whole it’s a joyful, expansive journey. I’d love it if you helped shape my journey through your comments and questions.

Some topics I plan to discuss or illustrate over the next several months include (not necessarily in order, nor exclusive of other topics):