The Truth about Topaz 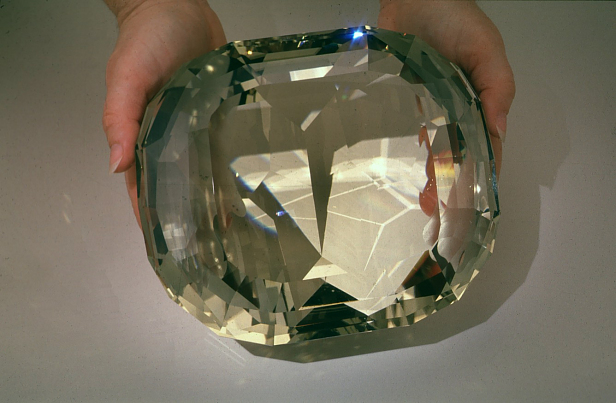 Near Delta, Utah there are a bunch of big volcanic rocks full of deposits of amber colored Topaz. The area is known as Topaz Mountain and it’s mostly public land so anyone can go looking for the stuff. Topaz is a crystalline gemstone that grows in gas pockets in igneous rock. the most common colors are blue and amber but it can also be pink, grey, clear, and reddish-orange.

We took the family down there over spring break to try our luck. We’d been there before so we knew to bring hammers and chisels to break the rocks and try to release the pockets of topaz crystals. It ain’t easy. As we approached Topaz Mountain we noticed that the road and surrounding landscape was sparkling in the sun. There were little crystals and silica scattered all around in the dirt. UV rays from the sun bleach the color from the topaz crystals so most of the scattered crystals are clear. Incidentally, other types of radiation, like x-rays will permanently change the color of the crystals and heat can intensify it. If you look in one of the many dry washes in the area, where the rain has rinsed off the dust, you can find some good sized crystals. Most of the topaz crystals that can be found in the area, on the ground and in the rock  are 1/8″ – 1/4″ but I’ve seen them as big as 1/4″ diameter and 1″ long. The Smithsonian displays a ten pound faceted stone that was found in Brazil.

There were quite a few people there that weekend looking for truth…uh, I mean Topaz. some had nice tools and were very earnest in their search, others just had simple garden tools, screwdrivers or even sand-box toys. I’m not sure if nicer tools were more effective since I couldn’t see what others had found. I was using a 20 oz. Estwing framing hammer and a cold-chisel from my toolbox. I didn’t find much that I kept but I sure had a good time with my family.

There were also quite a few people there who weren’t interested in the topaz at all. The surrounding area is great for riding ATV’s and dirt-bikes and they were kicking up quite a cloud of dust. The general geography in that part of the state is desert, so scorpions, tarantulas, and rattle snakes are native. 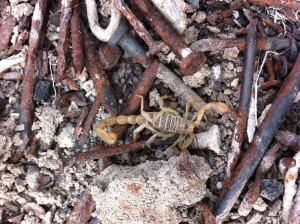 There are also about a jillion little lizards running around, very distracting for little kids. One young mom was preventing her children from climbing the rocks, to protect them from falling or getting bit. She probably thought that the parents of all of the other swarming kids were foolish. Better to be safe than sorry right?

South and a little west of Topaz mountain is another place to explore. It is the site of an internment camp used during WWII called the “Topaz Japanese Relocation Center“. During the war, everyone of Japanese ancestry was rounded up and Shipped off to these camps, miles away from their homes. None of them were ever charged or convicted of treason but better to be safe than sorry right? There were ten family camps throughout the country and four for men only. The families at the Topaz camp were mostly from the San Francisco area. They lived in little wooden houses about 15′ x 25′ with wooden floors and walls. The huts were organized in a little city with public bath facilities and a community center hall. The whole thing was fenced in with barbed wire and supervised by National Guard troops. It was in operation for about 3 years from 1942- 1945. The houses are all gone now, they were hauled off  by local farmers for sheds and you can still see a few of them scattered around the landscape, but the streets and concrete pads that the buildings sat on are still there. Around some you can see hand-placed stone pathways and garden borders. Some families wrote their names in wet concrete or in small stones. There are many dump sites throughout the camp where you can see bottles, shoe soles, bits of metal and other non-perishable waste. 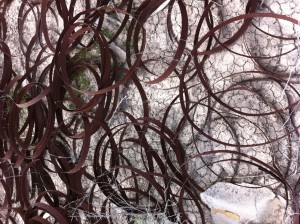 We wandered for several hours mostly alone, sometimes together commenting off-handedly about the things we were seeing. The land is wide and flat and quiet. Dry grass and tumbleweeds clutter everything and there is a constant wind blowing through our hair. Knowing the history of the site, the evidence is painful and the place feels sacred. The land is now owned by a private volunteer organization; “The Topaz Museum Board”. They have built a museum in nearby Delta and they are working to preserve the site so digging in the camp is prohibited. So while you can’t take anything tangible away, wandering is encouraged.

It was a meaningful day for us, we enjoy each others company, the beauties of nature, and a good adventure.  We left with a little topaz, a little history and a little truth.