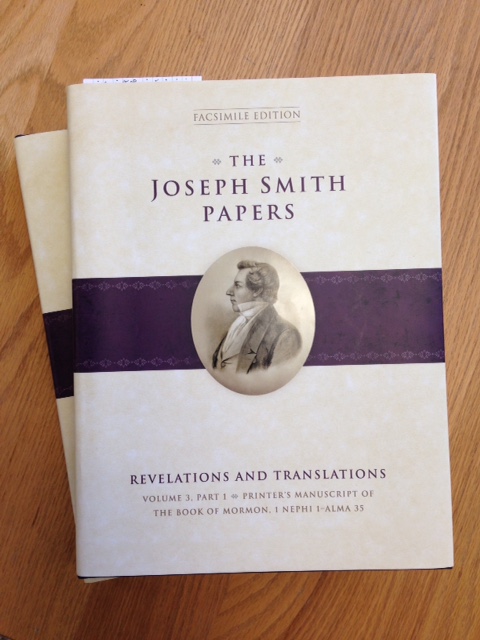 The newest volume in the Revelations and Translations series of the Joseph Smith Papers (JSP) follows the high level of quality that has come to be expected of the JSP in both the quality craftsmanship of the hardcover book itself and the contents on each page. This volume in particular is exciting for those interested in studying Mormonism from either an academic or devotional perspective (or both) for several reasons. Not only were the now popular images of Joseph Smith’s seer stone released at the same time online and printed in the first part of the volume, but the Printer’s Manuscript has never been as easily accessible as it is now. This has been a big problem for those interested in detailed text-critical analysis of the text of the Book of Mormon because the majority of scholars and laypersons alike have had to rely on Royal Skousen’s past transcriptions[1] rather than being able to verify whether or not they agree with them. Now everyone is able to compare the images on the left hand page to Skousen’s detailed transcription on the right. Being granted this ability is enough to commend the team at the JSP for the incredible work that they have done, not only with Skousen and his Critical Text Project, but with the Community of Christ (former RLDS), who own of the actual manuscript.

The format of the two parts will be familiar to those who have used Volume 1 of the Revelations and Translations series, the Manuscript Revelation Books.[2] These are large hardbound books, just over one foot tall and almost ten inches wide. The jackets have the beautiful JSP design we have become accustomed to, and the cloth is high quality dark blue with gold lettering on the spine. The images are high quality and allow the reader to view each single page as if you were holding the original. A nice shadow is cast at the bottom of each image to signal to the reader that no part of the original image has been cut from view. These images were provided by the Community of Christ,[3] but taken by Welden C. Andersen, “a lead photographer for the Publishing Services Department of The Church of Jesus Christ of Latter-day Saints…”[4]

There were several areas where I found clarification was added to the story of the production of the Book of Mormon in the introduction that I will briefly comment on. First, the editors explain that “Joseph Smith’s translation of the plates was not the scholarly process normally associated with that word.”[5] Although they don’t offer a different word that might better convey what Joseph Smith was doing,[6] it is helpful to know that the process he went through was not in the way that we generally think of the term “translation” today.

Second, it has been pointed out in several recent podcasts, radio interviews, and blog posts that there were multiple seer stones that Joseph Smith used, but there has been a lot of confusion as to what one was used and when. According to Skousen and Jensen, “Joseph Smith owned more than one seer stone, though evidence generally points to the brown seer stone as the one used in translation.”[7] The seer stone in the newly released images was the major instrument, along with Joseph Smith’s white stove-top hat, in the production of the Book of Mormon. Joseph Smith only used the spectacles (later referred to as early as 1832 as “Urim and Thummim”) at the beginning and later switched to the seer stone “for convenience,” according to Martin Harris.[8]

Third, before reading this introduction I had always thought that Joseph Smith had never told anyone about the process involved in producing the Book of Mormon. I had assumed that because his brother Hyrum had asked him to describe the process at a conference in October, 1831 and his declining that opportunity that he likely didn’t tell anyone.[9] It is instead more likely that Joseph Smith described the process to a local printer named Jonathan Hadley, editor of the Palmyra Freeman, when Smith and Martin Harris were looking for a printer to publish the book. Hadley wrote that Joseph Smith discovered a “huge pair of Spectacles” with the plates and that “by placing the Spectacles in a hat, and looking into it, Smith could (he said so, at least,) interpret these characters.”[10]

The next section (pages xxix-xxxiii) is on the editorial method of the transcription. Thankfully the JSP team decided to edit Skousen’s original 2001 published transcription to fit their method. This removes many details that are unnecessary to most readers, including academics. Each word and mark is still noted, but the transcription is not as bulky as it was before. The transcription has been cleaned up and made more user friendly than Skousen’s previous volume.

A short note was added from pages xxxiv to xxxvi about the photographs themselves. Although not everyone will be interested in knowing the exact kind of camera that was used, or exactly how they took the photographs of the Printer’s Manuscript (important historical notes), many will find the section “Limitations of the Photographs” helpful. They describe two categories where the photographs in the volume are limited in their use. First, some uninked details in the manuscript cannot be seen in the photographs. Second, various physical features obscure the text and older images of the manuscript needed to be consulted. In my opinion these are the kinds of problems you would want to have. They deal more with natural constraints of the publication, the size of the page, and the physical state of the manuscript rather than low resolution images or questionable editorial methods.

The next section, spanning from page 1 to the end of the Part 2, is the Printer’s Manuscript of the Book of Mormon. The first eleven pages include a “Source Note” and “Historical Introduction.” The source note describes the details of the creation of this specific manuscript, dimensions of the manuscript, and the methods the scribes went through in producing it for the printer. The historical introduction provides specific dates for the beginning of copying the manuscript from the original, the fact that Joseph Smith and Martin Harris had to secure bids outside of Palmyra as far away as Rochester in order to get the eventual printer, Egbert B. Grandin, to reconsider his decision to turn them down. They also discuss little details such as how the Printer’s Manuscript also reflects alterations made in preparation for the 1837 edition of the Book of Mormon.

In my experience with the text thus far I have found it to be of the highest standard of academic quality. The only correction that I have found that could be made was pointed out by Brent Lee Metcalfe in an essay he published back in the fall of 1993. On page xix of the introduction Skousen and Jensen state in note 60 that “The earliest application of the biblical term Urim and Thummim to the instrument for translation is in [William W. Phelps], “The Book of Mormon,” The Evening and Morning Star, Jan. 1833, [2].” As Metcalfe pointed out in his article, Phelps had already called the instrument or spectacles “Urim and Thummim” in The Evening and Morning Star in July 1832.[11] It would be important to correct this in future publications and on the JSP website as it has appeared in numerous publications.

Royal Skousen and Robin Jensen should be congratulated for the fine work that they have done, along with all of the historians who have spent countless hours working on the prior volumes. This new volume compliments and strengthens the other volumes already published in the series, and gives me great hope for the future volumes yet to come out. I am particularly interested in any more volumes that are forthcoming in the Revelations and Translations series. There is still a lot of work that will be done, and I look forward to each volume.

[1] Royal Skousen, The Printer’s Manuscript of the Book of Mormon: Typographical Facsimile of the Entire Text in Two Parts (Provo: Founation for Ancient Research and Mormon Studies and Brigham Young University, 2001).

[2] This volume includes high resolution images and transcriptions of Revelation Books 1 & 2. Many of the earliest manuscript sources of the revelations that now comprise the Doctrine and Covenants can be found in that volume.

[6] It will be noticed that I use the term “production” instead of “translation” throughout this review. This is not to imply that this is the word I think should be adopted, but for the purposes of this review it is employed.