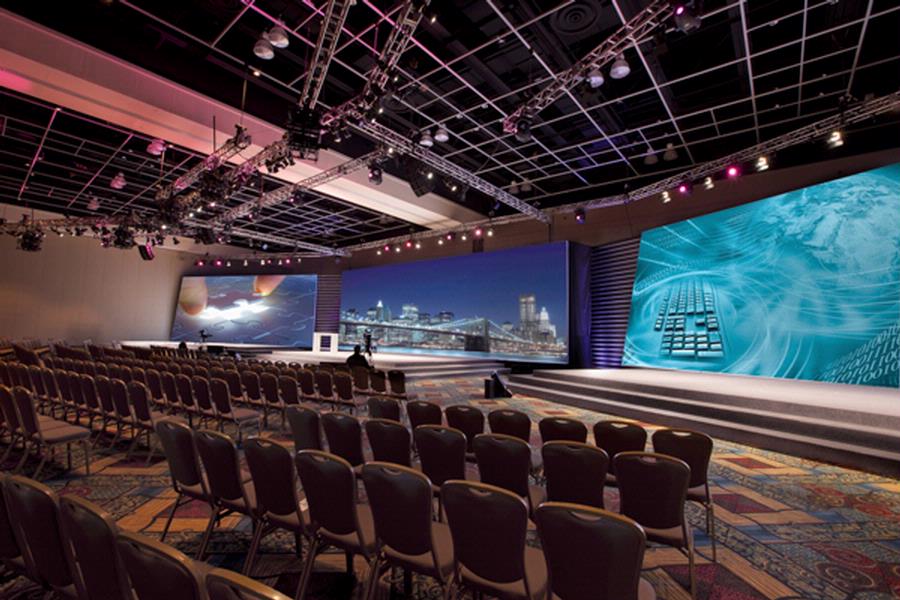 I’m an audio and video systems engineer and media technician. In my job, I design and build large-scale AV systems for conferences, corporate meetings, trade shows, parties, or other events. I work with large and complex sound reinforcement systems, video projectors, televisions, conventional and robotic lighting fixtures, and lots of computer software. With all of these elements involved in a show, inevitably problems arise that need to be diagnosed and corrected in a timely fashion.

That makes the foremost requirement of my job, a keen understanding of electronic signal flow. 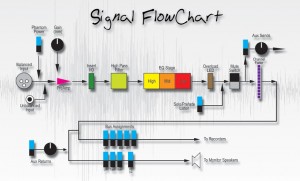 A given audio or video source like a microphone or a camera, outputs an electrical signal that can take any number of forms, and can be conveyed over many different kinds of cables or wires (even wirelessly), with hundreds of different connector types and routed to a destination like a loudspeaker or projector where they can be heard and seen by an audience. Understanding all of these ins and outs can get complicated. The first major distinction in signal flow is an understanding of the differences between analog signals and digital signals. 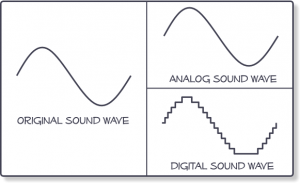 Analog signals carry a continuously variable “wave” of voltage alternating between two poles. All kinds of information can be indicated by voltage. How bright a light shines is controlled by increasing or decreasing the voltage fed to the circuit that controls the light. A simple on/off switch either feeds a full current of voltage or no voltage to the bulb it controls; while a dimmer switch cuts the voltage as you turn it toward “off” and increases it when you turn it toward “on”. How loud a soundsystem should play back a sound, the brightness of a camera image, or the color of a decorative light can all be controlled by manipulating an electrical signal.

Analog signals represent the highest fidelity. Fidelity means faithfulness, or accuracy. Analog signals are difficult to transmit over long distances without degradation. The longer you attempt to convey an analog signal, the more degraded it becomes. Like making a xerox of a xerox, you lose some image quality every generation you are removed from the original. For example, I can’t use an analog video cable (like VGA) for a distance greater than 50′, because there will be a noticeable drop in image quality. So even though analog signals are closer to the truth, they can’t travel far without losing integrity. Visually, this manifests as “ghosting”, where images have a shadow.

Unlike analog, a digital signal is a series of sampled steps. If you zoom in too close on a digital image, you will begin to notice the pixelation or sampling that composes the image. That’s because the image is actually composed of millions of individual squares of color called pixels. A higher resolution image has a greater pixel density. Meaning more pixels per inch. Because it is sampled many more times, the accuracy of the image is greatly improved. A digital signal has greater integrity, or strength, and it can be reproduced perfectly even over very long distances because the data can be reassembled exactly at the receiving end. At long distances, digital signals will appear to be sharper, brighter, have better color, and be an overall better representation of the source. In reality, the analog signal is truer to the source, but much of that truth is lost in transmission.

While he can and does communicate with humankind, the Lord makes it clear that we are, at best, imperfect receivers for his divine transmissions, because of our distance…

I would assume by my understanding of the scriptures, that an analog communication with God is impossible without being transfigured in God’s presence. Even in that scenario we are told there’s a distance, a protective filter between the communicants to avoid being consumed in the in-fathomable brilliance of celestial fire that surrounds the Lord.

Most of our communications from God could be understood to be of a digital, sub-sampled nature. Revelations from God through his prophets could be considered to be given at a high enough resolution give the image of perfection. But they are all, by virtue of their mode of transmission, incomplete.

Jared Anderson explains what he calls the human filter in revelation, thus:

I suggest that God conforms revelation to the recipients expectations, world view, and language, and that this model best explains conflicts between scripture and scholarship. This concept may trouble the handful of us conscious of these difficulties, but from a salvation and communication perspective, it is the most efficient way for God to transmit spiritual truth. We as scholars are concerned with accuracy and historicity defined in a narrow sense, but such is not the case with the majority of God’s audience. When God grants his child a revelation, he is not going to sideswipe them with unexpected historical niceties. A vision recounted by Orson Whitney illustrates my point. This mystical experience is spiritually efficient and emotionally powerful, but sets off a few alarms in the corridor of historical criticism.

“Then came a marvelous manifestation, and admonition from a higher source, one impossible to ignore. It was a dream, or a vision in a dream, as I lay upon my bed in the little town of Columbia, Lancaster County, Pennsylvania. I seemed to be in the Garden of Gethsemane, a witness of the Savior’s agony. I saw Him as plainly as ever I have seen anyone. Standing behind a tree in the foreground, I beheld Jesus, with Peter, James and John, as they came through a little wicket gate at my right. Leaving the three Apostles there, after telling them to kneel and pray, the Son of God passed over to the other side, where He also knelt and prayed. It was the same prayer with which all Bible readers are familiar: ‘Oh my Father, if it be possible, let this cup pass from me: nevertheless not as I will, but as Thou wilt.’

“As He prayed the tears streamed down His face, which was toward me. I was so moved at the sight that I also wept, out of pure sympathy. My whole heart went out to Him; I loved Him with all my soul, and longed to be with Him as I longed for nothing else… He offered up the same prayer as before; then went back and again found them sleeping. Again He awoke them, readmonished them, and once more returned and prayed. Three times this occurred, until I was perfectly familiar with His appearance– face, form and movements… All at once the circumstances seemed to change, the scene remaining just the same. Instead of before, it was after the crucifixion, and the Savior, with the three Apostles, now stood together in a group at my left. They were about to depart and ascend into Heaven. I could endure it no longer. I ran from behind the tree, fell at His feet, clasped Him around the knees, and begged Him to take me with Him.

“I shall never forget the kind and gentle manner in which He stooped, raised me up, and embraced me. It was so vivid, so real. I felt the very warmth of His body, as He held me in His arms and said in the tenderest tones: “No, my son, these have finished their work; they can go with me; but you must stay and finish yours.” Still I clung to Him. Gazing up into His face– for He was taller than I– I besought Him fervently: “Well, promise me that I may come to you at the last.” Smiling sweetly, He said, “That will depend entirely upon yourself.” I awoke with a sob in my throat, and it was morning.  “…. I saw the moral clearly. I have never thought of being an Apostle, nor of holding any other office in the Church, and it did not occur to me then. Yet I knew that these sleeping Apostles meant me. I was asleep at my post — as any man is who, having been divinely appointed to do one thing, does another.

“But from that hour, all was changed. I never was the same man again. I continued to write, but not to the neglect of the Lord’s work. I held that first and foremost; all else was secondary.”(Orson F. Whitney, “Through Memories Halls”, 1930, p. 82 Quoted in Bryant Hinckley, The Faith of our Pioneer Fathers, 211-213).

No one could deny the spiritual and emotional power of this account. It changed Orson’s life and touches the reader’s emotions. Obviously, this vision fulfilled God’s purposes. And as Orson repeatedly emphasizes, this vision was as real to him as any other experience. But to those of us attuned to such things, the anachronisms are striking—Orson sees not the Gethsemane of Jesus’ time, but a garden like those with which he would be familiar. Instead of hearing Aramaic interpreted through the gift of tongues, Orson heard not only the exact King James rendering of Jesus’ prayer, but specifically the one he knew best—drawn from Matthew 26:39. This sublime experience drives home the point of this paper—God gave Orson exactly the vision that would maximize its spiritual affect; at the same time, the details reflect not historical reality, but the recipient’s expectations.”

-“Expectation and Revelation: Preparing the Way for LDS Biblical Studies,” 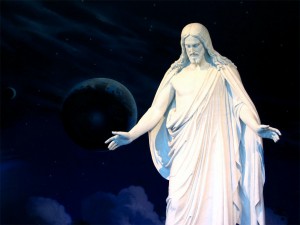 The more study I have given to the revelations of God to his prophets and to the church, the more I am convinced that all of our revelations are deeply limited by our mortal distance from God. But those limitations, also come with their advantages. Indeed, as in Orson’s case, revelation becomes more beautiful and meaningful precisely because of its limitations. The Lord uses our weaknesses as his strength, until we grow and mature enough to be able to learn more. The more we close the gap; the more we become like our heavenly parents through the acquisition of spiritual gifts, the more truth we will find in the scriptures and the revelations of God. It is only to the extent that we know the Lord, his mind and his nature, and more fundamentally his love, that we will see in his revelations (both personal and churchwide) greater clarity and a more excellent way.