From “Oh, My Father” to “Restless Weaver” – Ola is the New Eliza! 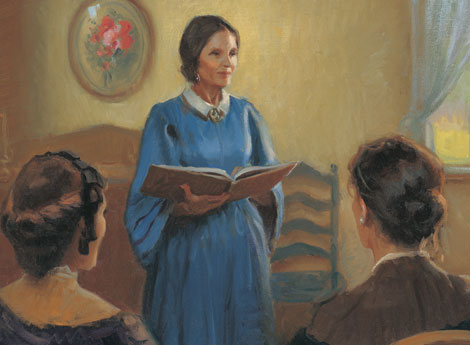 It seems everyone in the LDS world is familiar with the hymn “Oh, My Father” by Eliza R. Snow. For Mormons, this hymn is unique in the sense that it both mentions Heavenly Mother and functions as a prayer in its own right:

In the heav’ns are parents single? No, the thought makes reason stare!  Truth is reason; truth eternal tells me I’ve a mother there…..Then at length, when I’ve completed all you sent me forth to do, with your mutual approbation let me come and dwell with you.

While this is the Heavenly Mother-related hymn most familiar to Mormons, it is certainly not the only one out there. The Christian Church, Disciples of Christ denomination has its own modern-day Eliza R. Snow, and I’ve had the privilege of studying under her briefly at Lexington Theological Seminary in Kentucky.

Ola Harrison (also known as O.I. “Cricket” Harrison, or just simply Prof. Harrison) is the author of the hymn “Restless Weaver.” This hymn paints a vivid picture of Heavenly Mother as She not only weaves the cosmic tapestry, but invites us to join Her in that sacred endeavor working towards Her eschatological vision of the eventual renewal of creation. In the words of the first stanza….

Restless Weaver, ever spinning threads of justice and shalom; dreaming patterns of creation where all creatures find a home; gathering up life’s varied fibers, every texture, every hue; grant us your creative vision. With us weave your world anew.

There is no question in my mind this hymn is inspired. For me “Restless Weaver” was my initiation into the realm of the Sacred Feminine. At that time in my life, I had little to no understanding of this doctrine, given the simple fact that I was not raised with it. If anything, I was taught that a belief in the Sacred Feminine was “pagan,” and therefore inconsistent with Scripture.

Due to my own sacred experiences with Heavenly Mother and searching out the Scriptures for myself, I know She is real. And biblical. You just have to know where to look to find Her.

Recently I conducted an interview with Prof. Harrison. Here is what I learned….

Me: From where did you receive the inspiration to write “Restless Weaver”?

Prof. Harrison: Climb in the time machine. We’re rolling back to 1988. I had started as Associate Pastor at First Christian Church, Oskaloosa, Iowa. One of my duties was to represent the congregation in meetings of Shalom Congregations- congregations working for peace and justice. I attended a conference/retreat in Macomb, Illinois. The setting was a Catholic retreat center in the area. The sisters who ran the retreat center had two working floor looms in the main conference hall. The community made hand-loomed hangings and blankets to help provide support. The theme of the retreat was “Peace-ing It Together” and the logo was piecing a quilt. So textiles, fabrics, textures were on my mind during the retreat.

Me: Did you realize there are references to “weaving” in the Scriptures in connection with the Temple and the Sacred Feminine?

Prof. Harrison: Yes. Textiles and the creation of them shows up several places. There are hints of it in the New Testament. I’m thinking the first chapter of Colossians speaking of Christ being the power that knits all creation together. Woven cloth figures a lot in scripture. Levitical law prohibited mixed fibers-no wool and linen mixtures. I think too of the finely woven and embroidered linen used for the curtains of the tabernacle (prefiguring the designs for the Temple) Exodus 35 and following.

Me: Could you explain a little about the song itself and the symbolism behind it?

Prof. Harrison: Restless Weaver–not restless as in not sleeping but always moving, always bringing new life to be. Threads of justice and shalom-a single thread has a breaking point but bring several together they are stronger. Varied fibers, every texture, every hue- each life, indeed each entity in creation adds it’s own weight, characteristics and color. Think of biblical characters: Peter maybe is rough burlap, while others are fine silk. Grant us your creative vision, with us weave your world anew. I believe God calls each one of us to participate in the unfolding of creation. With us weave your world anew. That’s the first of the double entendres/double meanings in the text. There’s the sense that God is “with” us as Emmanuel, partnering with us. But there’s also the sense that we are the threads that God is using in the overall design of the ‘living tapestry.’ The second verse is pretty much self-explanatory. God calls us and holds us accountable for caring for the world.

Me: Could you explain a little about your relationship with Heavenly Mother and how you, as a Disciples of Christ ordained minister, see Her?

Prof. Harrison: I was probably eight years old when I started questioning why we pray to “Our Father” and not to “Our Mother”. Not especially a popular question in 1963. At first I was content with the answer that Jesus taught the disciples to pray to their Father in Heaven. As I matured and began theological studies I couldn’t reconcile all creation participating only in the masculine principles with feminine attributes a secondary value. I began to wonder how we distort the Imago Dei. We have flattened it into a caricature of Lord Father King when it truly is a dynamic process wherein all people bear the Image of God. It takes all of us, female and male to show the complexity and mystery that is God. In my personal devotions, I’ve prayed to Mother of Mystery, Source of Life, since seminary.

Me: What is your advice to Mormon women who would like to get to know their Mother in Heaven better?

Prof. Harrison: In general, I’d advise women not to see what Mother God looks like, but focus on what She is doing.