Reflections on Faith and Freetown 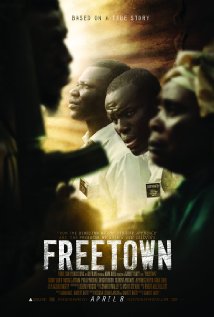 “Is Faith Supposed to be this Exhausting?”  Bro Abubakar asks. It’s one of many favorite quotes I took away from the movie Freetown.

I remember when I first saw a promotional video for Freetown.  I was leaving the movie “Selma” in January. I had watched it with a group of friends, most of whom are also Black Latter Day Saints. We wondered what the movie was going to be about and when it would air. On billboards, I saw that it was compared to the Saratov Approach (which I never saw) and that it featured Black missionaries. That was the extent of my knowledge besides the decent ratings it has received thus far.

Generally speaking, I like missionary movies.  I prefer “God’s Army” to “Suits on the Loose,” however, I enjoy the energy that comes when sharing life stories from the lens of missionary service.  Freetown intrigued me.  I’m glad that I made the time to view it.

Movies about Black experiences are often difficult to watch when you have a differentiated sense of consciousness and black identity because of basic cinema themes that find their way into movies about blackness in the service of white interests. I wasn’t sure if Freetown would hit or miss the mark. (In this case, it’s a time that you hope a movie misses the stereotypical paternalistic marks).  Things that gave me pause were moments of seeing black missionaries teaching black people about white Jesus on pass-along cards. I can’t exactly find the word to describe what that was like, however, the movie was so centered on blackness to tell the story that each time white-Jesus-on-a-pass-along-card came into the shot, it was jarring. There just weren’t many white people in the movie, except for Jesus pictures. And it wasn’t very often that the pass-along cards showed up (maybe 3-5 times?) it simply caught my attention. And maybe that was part of the purpose.

Another theme that shows up in movies about blackness is that of the need for a white savior (not pass-along Jesus, but close). There, technically, wasn’t a white savior in this movie besides the Jesus cards. There was mostly white abandonment.  A white Stake President sends a local Liberian saint out to do a rescue mission of sorts, with nothing more than a few vague orders and a comment that was supposed to be endearing – “these young men look up to you/they need you/you’re good for them, etc.” It felt disconnected, which led to paternalistic and patronizing and abandoning feelings. I wondered how Brother Abubakar felt? He was already a worrier and this was his faith challenge when you look at the upside.   Still, it gave me a feeling of the Stake President saying “not my problem, brother! But don’t you mess it up! Good luck!”  It also could have been, “don’t fear, I have faith in you,” too.  Simply put, it felt hopeless in those few moments. I’m glad they were small moments at the beginning and the end of the film because the presence of the characters completely took over the entirety of the movie’s mood as I continued to watch.

I was thankful that the movie had nothing to do with cinema stereotypes and so much more to do with what missionaries do best – serve God with their heart, might, minds, and strength. I had favorite parts and favorite people from the movie. I wish I had written down my favorite quotes. However, because this will be a movie that I own when it’s released on DVD, I’ll have plenty of time to write quotes down.

Favorite Parts and Principles from the Movie

In no particular order, I’ll share a few of the interactions I enjoyed most.

Prayers and Teaching: There’s a cadence in black speech that links each of us in the Diaspora.  It’s simply a way of knowing. It is felt as much as it is spoken.  As I watched the story of Black Saints in Liberia, the prayers felt like home. There’s a substance within the prayers of Black people that is different from anything I have words to explain.  When Saints pray, they converse with God in a way that is instantaneously connecting and healing.  The familiarity with which the missionaries and the members expressed themselves to God in prayer with Him, and in discussions about Him, demonstrated such a personal relationship, solid trust, and commitment to Him and His Word that it was piercing to me. This spiritual current flowed into how they taught about the Gospel when making contacts. I realized that this was so poignant to me because they actually taught about the Gospel and not the men in the Gospel.  I have missed feeling the current of this connection in my ward meetings. Thank goodness for The Genesis Group!

Commitment to Truth despite Contention

From funny moments in map planning (simply classic “Elders can make a joke out of anything, even a rock on the hood of a car” types of things) to the decision to find a field where they could readily harvest, these Elders exemplified their understanding of the big picture in this eternal round of their work for the Lord. They weren’t having easy conversations. They weren’t readily in agreement. They weren’t consistently supportive. They weren’t, necessarily, obedient either. They swayed between living and surviving, bravery and perseverance. It was clear that their conversations were dependent upon the elders’ individual conversions and commitment to continue the Work.

I enjoyed the film’s ability to weave in layers of complexity supported by firm statements of testimony with personal, unequivocal Truths. I wondered if they would mention the Priesthood ban. They did. They discussed conversion and they celebrated God’s joy in us when even one sinner changes from his evil (and implied racist) ways. I appreciated the nuance in their discussion of God’s chosen organization’s connection to the ban versus connecting the ban to God himself.

I think my favorite part of the film had to be in seeing the ways the Gospel crossed man-made enemy lines. There are powerful moments of choosing bravery and choosing life, brotherhood, and being knit as one in the film, where I realized that hearts may be turned toward you and toward Christ even when hands are tied by politics and power. I thought about how easy it is for us to watch a movie about “struggling international faithful Latter Day Saints” who battle an easily identified evil that all movie goers can rally against.  It has the potential to send a “don’t you complain about racism in America or the history of the LDS Church when these people are surviving war just to share white Jesus on a pass-along card!” message if we aren’t using our ears to hear and our eyes to see beneath the surface.

I do yearn for a day when we are able to do the same rallying in the LDS Church against racism, even if it is simply to acknowledge it and its damage to the Saints of African descent across the world.  I want Freetown to help us truly change from our ways and understand why Mark 9:24 was printed on Brother Abubakar’s windshield.  You don’t actually read the scripture until the end of the credits (unless you’re like me and look it up at the beginning of the movie). And I hope that you connect it, as I did, with the only hymn sung during the film, “Know this that every soul is free.”

Mark 9:24 is the scripture story quoted by Elder Holland in his talk, “Lord, I believe.” I, personally, call it the “worrier’s mantra” – Lord, I believe. Help thou mine unbelief.

I left my viewing of Freetown with a stronger belief in the work that the Gospel calls us to do. Help thou mine unbelief.

I worry that Freetown will go as far as entertainment that strokes our paternalism and stops there. Help thou mine unbelief.

I worry that it will become a form of media used to clobber Saints into not speaking up against injustices experienced in the Church just because the violence of injustice experienced by Blacks in the US, as an example, is justified through years of indoctrinated racism. Help thou mine unbelief.

I do believe that the Gospel can and does change us.  Help thou mine unbelief.

I do believe that the Gospel creates allies out of enemies. Help thou mine unbelief.

I do believe that the Gospel knits hearts together in worship and Truth. Help thou mine unbelief.

I do believe that Freetown tells a story that encourages us to step into our own histories and grow from the pain we have experienced by the hands of others or that we have inflicted upon others.  Help thou mine unbelief.

Is faith supposed to be this exhausting? The answer is probably Yes, because the fruits of that faith, the hard-earned kind, border on exhilarating.

LaShawn is a mental health professional in Utah, USA. She is a lifelong member of the LDS Church and sees the Gospel as an invitation to live a full and authentic life.

All posts by Dr. LaShawn Williams