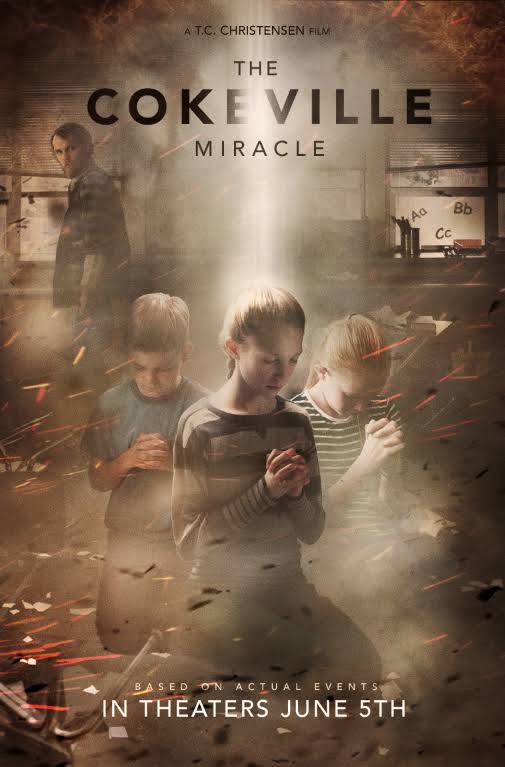 Most Latter-day Saint (LDS) movie goers are familiar with the work of T.C. Christensen from his past films 17 Miracles and Ephraim’s Rescue (among others). These movies have earned Christensen a place in LDS cinema that will probably not be filled for some time, which is likely due to their stories being near and dear to the history of the faith of these movie goers: the films were each about the pioneer trek. Although Christensen’s new film, The Cokeville Miracle, is on a strikingly different topic, LDS viewers will find the powerful storytelling Christensen has come to be known for all throughout the film.

The Cokeville Miracle tells the story of a hostage crisis in 1986 at the elementary school in Cokeville, Wyoming. The movie begins by following the story of Ron Hartley (Jasen Wade), a local police officer in Cokeville. Hartley had been struggling with a belief in God primarily due to the horrible things he would see in the field from day to day. He questions whether or not an all powerful being would allow suffering of innocent victims in the world to the extent that he has seen. This causes tensions between himself and his wife, and his young son and daughter are aware of the struggles he is going through. During this struggle Hartley asks for a sign of whether or not God is there, and asks for help to regain his former faith. Hartley’s answer will culminate in the way that the hostage crisis pans out and his investigation into how it exactly happened.

David Young (Nathan Stevens) and his wife Doris (Kymberly Mellen) decide to take the entire school hostage in one room (including Hartley’s two children) and demand to be paid $200 million for the safe return of the students and teachers. David, who was formerly the town marshall and has now become his own brand of religious fanatic, has created a large homemade gasoline bomb on wheels and has strapped the trigger to his wrist. Any move by the elementary school teachers or students and he need only to lift his arm and the string attached will make the bomb explode. This causes the students to all pray together after many hours of sitting in the room with the Youngs. Fortunately for the students and teachers something very unusual happens while David has stepped out of the room, and the ending of the story builds up the kind of evidence that will help Hartley along his faith journey.

For the audience it is directed toward the film will be a welcome addition to the growing LDS cinema collection. The film does a great job describing the history of the hostage crisis through the lens of the families involved, and while there can always be improvements the actors and actresses portray their respective roles well. Nathan Stevens does a remarkable job creating and maintaining a very believable tension between himself and the school children, and although Jasen Wade shows the real struggles that one might go through during the loss of faith his position as a doubter seemed a little strained. While this is normal for a movie of this kind, particularly one with an inspirational bent, it could have helped create more depth to his character if they had taken into account the one-sided nature of his lines and reasons for doubt.

This was reminiscent of the straw man positions that Kevin Sorbo‘s character gave as a Philosophy professor in the recent film God’s Not Dead. The end result is a doubter who is only convincing to viewers who have either never experienced these feelings themselves or had even a short conversation with someone who has them. I’m also not sure it is helpful to put Hartley in a position where he has to choose between family and faith as this can suggest to an audience that this line of action is desirable. I met several families while serving my mission that had waited several decades for the father or husband to return to faith. The latter example is more commendable in a religion that believes in the eternal nature of families (think of all the families in the past that didn’t share the LDS faith that are now having their work done in the temples) than the threat of divorce. It is also necessary to remember, especially in light of recent years, that although this story was a miracle for those involved, there have been other families and students that have fallen victim to hostage situations throughout the country. This does not mean that these people had any less faith or were not praying for safety, which the film might be taken to imply. In the end it is a movie intended to be inspirational and tells a real life story about a powerful experience of a small tight-knit community in rural Wyoming.

Besides these points, I thought the cinematography was beautiful, and the soundtrack was a good choice for the film. Overall I highly recommend the movie for a Latter-day Saint audience and the film itself is directed at a more general audience than just the LDS community. The language that is used throughout the movie is not specific to LDS verbiage (except maybe the Hartley family prayer), and the only references to Mormonism I remember in the film are familiar LDS images of Jesus hanging up in Hartley’s local chapel and a couple of Janice Kapp Perry songs. For some the strong tension felt between David Young and the students might be a little too much, but the elementary students are in almost scene throughout the movie. While it is recommended to take this into account when deciding whether or not to take the family, this should not deter anyone from actually seeing the film.