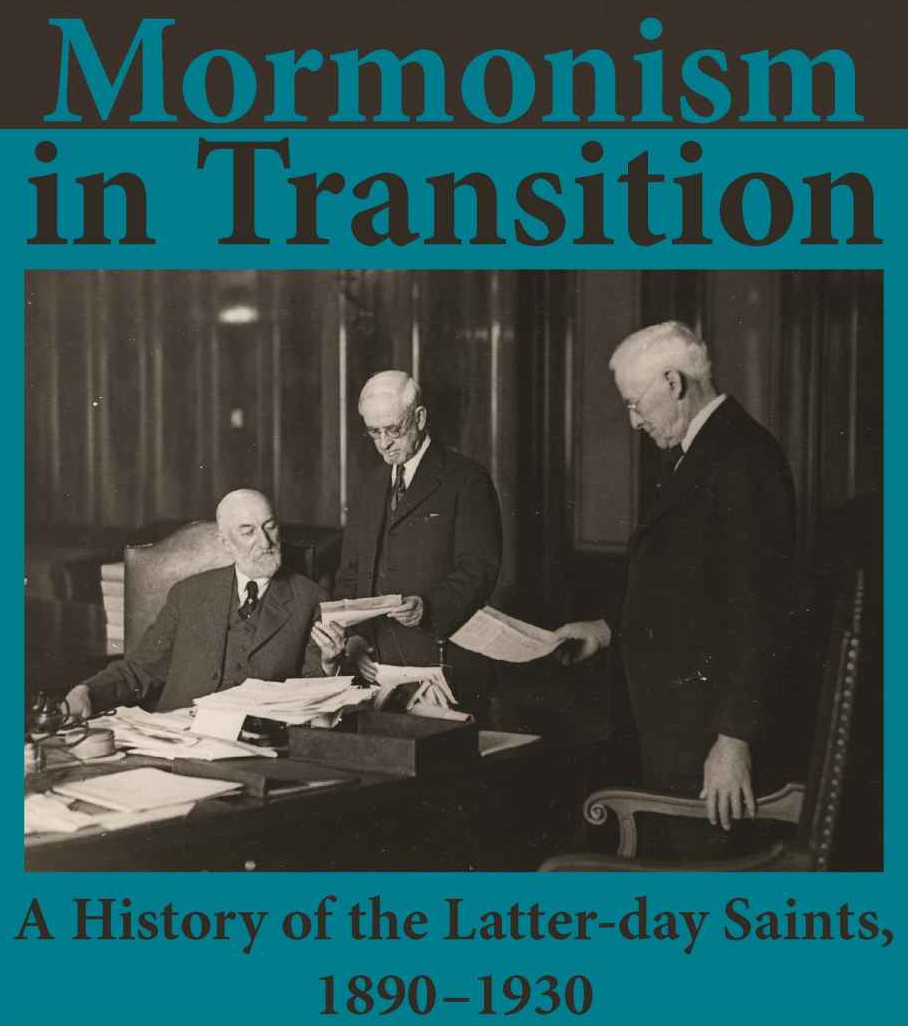 A review of Mormonism in Transition, available through Greg Kofford Books. If you want to skip to the quotes, click here.

During the ‘Camelot Era’ of Leonard Arrington the church history department had plans to release a series of Mormon history for the church’s sesquicentennial. It was to be a 16 volume series on the history of the church, an attempt to repeat the work done by B.H. Roberts. The project never came to fruition, at least not as intended. Much of the work was never done, but at least two authors did complete and publish their assigned volumes. Richard Bushman published his volume as “Joseph Smith and the Beginnings of Mormonism.” The other volume was  Thomas Alexander’s “Mormonism in Transition.”

Unless this is your first time reading this blog or first time reading anything in the bloggernacle, you’ve likely learned a fair amount about early church history. You may have wondered how the church changed from a small, collectivist, polygamous sect into our current church. Throughout my childhood and into my adulthood most of our church history seemed like a black box. Even today the church curriculum leaves the majority of our church history untouched and undiscussed. We heavily cover the era of Joseph Smith and to a lesser degree cover Brigham Young. Other than the usual Lorenzo Snow lesson on tithing, we don’t really discuss church history between Brigham and now. If we had to pin down a time period that was most crucial for understanding the development and history of the church it would almost certainly be 1890-1930. This book is named appropriately; the history in this time period enables the reader to bridge the gap between the early church to the modern church.

What changed during time? Here is just a tiny subsample of some of the changes:

There are so many other topics that you really need to just read the book.

Before purchasing a book (especially a history book), it is good to know the writing style it employs. There are many ways to write history. In this book Alexander opts for a broad, thematic approach rather than sifting through the details of many different documents as we often see in Mormon history of the Joseph Smith era. There are too many documents and too many macro-level developments to get into details discussing all Mormon history between 1890 and 1930. Alexander manages to paint a great picture of the large-scale changes and development which occurred.

If you’re like me, then you tend to want to hear history in a linear manner. Alexander does not do this regularly throughout the book. While it took a while to grow accustomed to, it was worth learning to make such a shift. At times the linearity is sacrificed in order to highlight development and allow the narrative to flow. Now that I’ve finished the book and have revisited portions of it, I can say that this approach has some significant advantages. If you can first grasp the general flow and development of several different issues then you have greater context when pinning down what was happening at a specific moment in time. Basically I’m saying that as a person who would typically prefer complete chronological order, this approach seems appropriate for this book.

I’ll now include just a small portion of some quotes from the book that I found interesting:

As long as the society in which Mormons lived and the Latter-day Saint community were coextensive, members generally perceived service in the society as building the kingdom. Increasingly, however, the Latter-day Saints came to view their community as something apart from the larger society. Under these circumstances, some members became dubious about the legiti­macy of accounting compassionate and social service outside wards and stakes as service in the Lord’s kingdom. Some, more concerned with personal morality than social service, believed welfare activities diluted religious experience.

In July 1916 Talmage recorded preparations for a party at Joseph F. Smith’s home. “In preparation for this visit the brethren of the twelve were divided into two classes—the Haves and Haven’ts or the withs and withouts—one class comprising those who own autos and the other consisting of those who have no such means of conveyance. . .  Members of the second class were assigned with their families to the care of their betters. Wife and I were conveyed to and from the Smith home by Brother and Sister Anthony W. Ivins in their splendid Packard Car.”

The [smallpox vaccination] controversy is very important because it reveals two strains in Mormon society which emphasize the tension between cooperation and individualism in the church. In the first place, many members tend to value individual liberty more than the welfare of the larger society outside the church, and, second, general authorities often will not speak out when they disagree with another church official who has already made his position public.
The tendency to put individual liberty above the community welfare needs to be qualified, of course. The church had supported withdrawal of the watersheds, railroad regulation, irrigation, and national parks. Nevertheless, in the smallpox matter and many other similar cases, members invoked the doctrine of free agency to oppose compulsion. In addition, a tendency existed – probably because of a residual feeling of millennialism, coupled with a belief in the power of the priesthood – to believe that if members simply lived their religion physical discomforts caused by disease would pass them by. In fact, at least one apostle, Abraham O. Woodruff, and numerous faithful church members died from smallpox in the first decade of the twentieth century.”

Additionally, there is a long excerpt from the book here that deals with the Church, its businesses, and government bail-outs.

For those who are interested in studying and analyzing Mormon history, this book is a goldmine, or perhaps a more apt analogy would be that it is a map. It shows you what is out there and facilitates the seeker to explore regions in greater detail. However, one shouldn’t think from the preceding that this book is like an index or an encyclopedia. Alexander put in the time and effort to have a thematic flow while covering vast amounts of material.

I own a hardcopy of this book (2nd edition), but I also was able to get an ebook (3rd edition). The ebook cleaned up the endnotes, which makes it easier to go to the primary documents if you’re interested in further study. I read this book on a Kindle Paperwhite. The only issue I had was that when I’d click on an endnote (say #15) it would take me to #16. That may be unique to reading the book on kindle, I don’t know. I must also praise the way the Notes are incorporated into the book. Rather than having them all at the end of the book, the notes are found at the end of each chapter. For people who like looking at the sources, this makes things a bit easier to locate.

So if you are interested in church history, you need this book. No other book out there covers this time period of Mormon history as comprehensively as Mormonism in Transition. I can’t speak highly enough for it. Seriously, go buy it. You’ll be happy you did.