A Mormon View of Charity vs. Justice 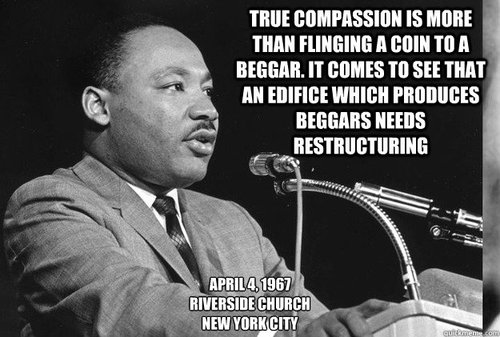 Elder Holland’s October 2014 General Conference address titled “Are We Not All Beggars?” was a masterpiece. In it, Elder Holland exhorted Mormons to serve and help others, even if those others seem to “deserve” their plight.[1] His sermon was a Christlike reminder that the poor are the Savior’s “foremost messianic duty.” The Bible and the Book of Mormon are full of commandments, pleadings, and admonitions to help the poor.[2] There is little disagreement about that fact. The LDS Church does a significant amount of humanitarian work across the world and Mormon people are charitable on an individual level in a variety of ways.[3]

While Elder Holland’s talk was not really “liberal”–the ethic of helping poor people is shared by conservatives and liberals alike–it was a welcome message for this liberal. I desperately listen for messages in General Conference that are even remotely liberal to balance out the ever present and less-than-remotely politically conservative messages in these and similar meetings. But regardless of this particular sermon’s political neutrality, Elder Holland’s topic was particularly timely considering a common criticism of liberal or leftist policy: the government shouldn’t be in the business of charity.

This criticism says that charities do charity and that government should get out of the way. I’m not going to disagree with that: in many cases, the government should just let charities do their thing. But I suggest that a Mormon examination of government programs might find that such programs are not actually about charity. In order to make this case, I will outline two types of social ills and their associated solutions.

Some people do terrible things to other people. They are despots, and you can find them in business, in politics, and occasionally in your neighborhood. They’re also in the scriptures: in the Book of Mormon we read of Alma and the sons of Mosiah who actively went around trying to subvert the equality so carefully established by King Mosiah. These activities weren’t illegal, but they were harmful. The law does an increasingly better job dealing with the illegal stuff (looking at you Madoff and Blagojevich), but as in the days of Alma and the sons of Mosiah there will always be individuals who legally harm other people.[4]

Relying on government to fix individual harm will only go so far. You do what you can, but you just can’t (and shouldn’t!) make everything that is immoral also be illegal, so when people do bad stuff there’s not much you can do but reach out to help the victims. Joseph Smith’s classic strategy of “teach[ing] people correct principles and let[ting] them govern themselves” works very well here.  The best charities are incredibly experienced at this sort of thing–acute short term relief from the results of individual harm. In this case, the charity was undertaken by Alma and the sons of Mosiah themselves who, rather than lobby for a law or government intervention to alleviate the suffering they’d caused, worked to alleviate it themselves.

Sometimes institutions and organizations have policies or behaviors that harm large groups of people. For example, the Book of Mormon gives us a look at the dangers of systemic inequality:

This wasn’t a case where a few bad people were oppressing their brothers and sisters. Rather, it was a case where the entire system had reached a point of injustice in which the poor would be oppressed whether or not individual people were to blame. This is key: you couldn’t very well point a finger at any particular rich person or people in this situation (those who had greater chances for learning) and blame them for the problem. Individual people weren’t to blame, nor was any subset or group of people. It was simply an unjust and systemic weakness.

Charity is no substitute for justice withheld.

Elizabeth Stoker drive the point home in contemporary terms: “But here’s what conservative Christians miss: Welfare programs aren’t about charity; they’re about justice.” When liberals talk about the importance of government safety nets and strategic wealth or income redistribution, we are simply trying to fix systemic failures with systemic solutions. And I’ll be the first to say we don’t always succeed. But this is our motivation. And trying to treat charity and justice as interchangeable leads to some problems for those we’re trying to serve, as Chris Henrichsen points out:

The change you put into the red kettle outside of WalMart this holiday season was more about the warm fuzzy it gave you or the sense of guilt it delayed than it was about those it will help. It will only help a small few and only for a short period of time.

Charity isn’t, and can’t be, a substitution for justice. Fighting injustice with charity is like fixing an electrical wiring problem by changing a light bulb. It is all but abusive to the ones most affected by the injustice:

Fiscal stability that relies on gifts is not stability. It is a guarantee of insecurity: income based not on work but on whim. Capricious generosity is not a replacement for a living wage, nor is it a basis for a functioning society. Charity is no substitute for justice.

“Taking what you can get” is also the path pursued by corporations and people who prefer cheap acts of charity to long-term investments in justice. It is a path that encourages citizens to depend on arbitrary generosity while decrying stable [programs] that help people through tough times.

William Sloane Coffin adds his words of inspired wisdom to the issue, summing it up as only this Christian giant can:

Had I but one wish for the churches of America I think it would be that they come to see the difference between charity and justice. Charity is a matter of personal attributes; justice, a matter of public policy. Charity seeks to alleviate the effects of injustice; justice seeks to eliminate the causes of it. Charity in no way affects the status quo, while justice leads inevitably to political confrontation.

To use another light metaphor: charity enters a dark room and starts handing out flashlights, while justice installs overhead lighting.

Now, how public policy addresses injustice is another matter and another blog post. But it seems to me that charity and justice are separate issues, that charity can’t even begin to address systemic injustice, and that the lefty view of a safety net and redistributive government seems both moral and Mormon.

This post was originally posted at MormonLiberals.org and was updated and republished with permission.