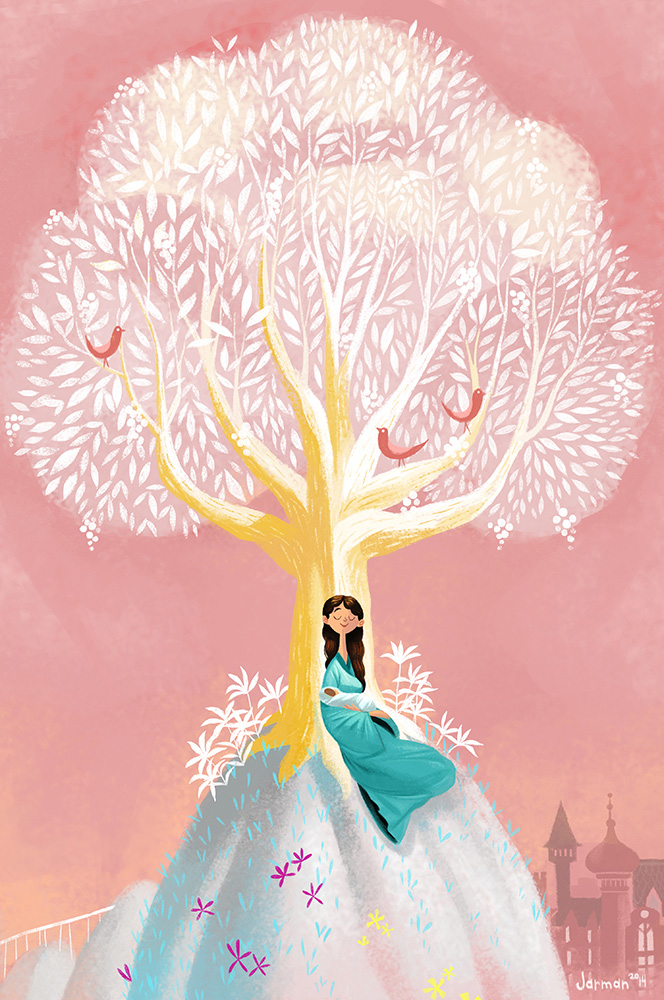 About a year ago I began my quest to better know Heavenly Mother. Frankly, I haven’t made it very far, but I have thought a lot more about Her, and I have thought more about mother Eve. Today I want to honor two women. I don’t know much about either, but I believe they have both played key roles in uplifting all humanity. I begin with my losing poem submission for the A Mother Here art and poetry contest, and then share my musings on the Eve of history.

Note: The featured image is titled “Heavenly Mother and the Tree of Life” by Mark Jarman and can be found in this gallery.

(1/14/2015 Edit: because someone was interested, the artist has provided an email address where prints can be requested. See the comments for his contact information.)

Mother’s Voice
Before I was, I heard you call:
Come be My son.
There is no safety here,
no sameness,
no return,
But I will teach you freedom.
Mother, I listened. I came.
I’m listening. I’m coming.
I heard—I hear your voice—
Love and be Free. . .
I followed others who had gathered round
Into your presence, learning at your feet.
I came too late to hear my brother speak—
Great Abraham above the hallowed ground—
Today we are engaged in a great war,
That all who dwell on earth Gods’ joy will prove.
That this world, under God, shall have new love—
A birth of freedom greater than before.
Though lives had passed, You thought that I should keep
The words he spoke—Our Parents brought forth our
New World, conceived in Liberty. This World
From its conception dedicated toward
This proposition—all Gods’ children are
Created equal, born for freedom. Free.

I think I’ve long subconsciously understood that symbolism, allegory, and parable have always been significant in how we are taught and learn the Gospel of Christ, but part of me continues to hang on to the idea that there are elements of literal truth behind, or within, many of the allegories. Because of my early and ongoing interest in the creation of the world, I have read and reread scriptural creation accounts over many years, and paid close attention every time I’ve been able to attend the temple. I finally concluded that there was no way to reconcile the details of any of the creation accounts with what science has uncovered of the physical creation process. It is possible to come close, but there is always at least one point where you have to break sequence, even after interpreting the sequence loosely–and I’m not simply talking about the days of creation. But part of me wants to hang on to literalism, so here’s my new literal.

Once upon a time there were bits of something called intelligence. Intelligence met other intelligence and formed intelligences. Some of these intelligences chose to be further organized as we were born as spirit children of Heavenly Parents. We learned about what it would take to become gods, and discovered that it was a pretty hard road. Many of us decided we didn’t want to go that way, and had to leave the path our Parents laid out for us. As spirits, and under the direction of our parents and older brother, we more obedient spirits created a world where we could live. It was good, and we went to live there–progressing yet one more stage toward the glory of godhood. It was a really nice place, without pain or death. Mom and Dad could come visit anytime. But it was a dead end of sorts. Satan, who had left the path to godhood, but not gone away, pointed this out to two of our siblings, Adam and Eve. He probably pointed it out to others, too. We would have to leave the Garden if we were to fully become like our Parents.

Eve decided to take the plunge. She would go to the world filled with pain, death, and forgetfulness, and separated from our heavenly parents, because she saw that it was the only way. I don’t know how the mechanics of the change worked, but she came here, and Adam followed. The rest of us here, eventually understood what Eve and then Adam figured out and decided to follow them–each of us independently choosing to leave the Garden. So it is kind of funny, Satan being punished for convincing Eve to leave the Garden. It probably really was what was done previously, and you and I might have been convinced to leave the Garden by Eve, or Adam, or someone else we revere. Maybe even God convinced some of His siblings to leave their Garden in another universe. I can imagine it–What! You’re punishing me for doing the same thing you did? But there’s the story.

We made choices all along the way. We aimed for a goal we don’t have to ever realize, but we can only get there through the stages and worlds that will shape us into Gods. The prophets who revealed the creation and temple stories to us may have seen this. They didn’t understand how the world was created, and they likely didn’t grasp all of the events before this life. I know we haven’t been given a clear picture in any of the texts or ceremonies we have available to us, today. But maybe they did see something real–something literal–and they captured it as best they could. Maybe Adam and Eve were real people, and they represent the choices each of us made before this life. Maybe the first estate literally was about showing obedience, and this one is about something else–we all showed our obedience already, so what is even more important?

I may have discarded a this-world, literal view of the creation stories, but I’m reluctant to make them only symbolic.