Introverts in an Extrovert’s World: A Review of “Quiet” 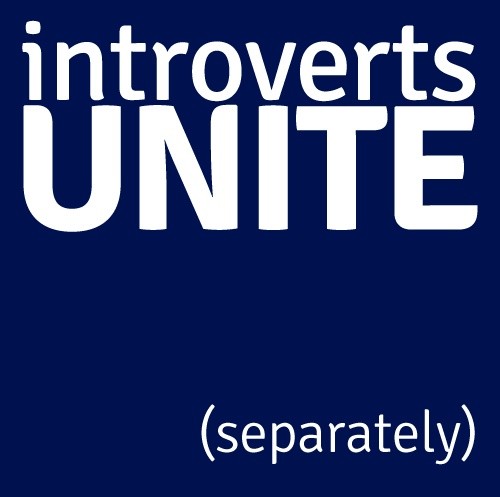 Sometimes I actually read books that are not Mormon History Books believe it or not and the latest one is about introverts. It is a book about people like me! The fact that Susan Cain‘s Quiet: The Power of Introverts in a World That Can’t Stop Talking has become so popular (NYT best seller) is a great thing. It is clear that the western world promotes extroversion as she describes in the first few chapters, discussing examples like the Harvard Business School, the Saddleback Church culture, and the new Group-think exemplified through grading based on participation rather than merit. And it is clear that this is bias is not universally good. I’ve noticed similar values espoused within my own subculture, the LDS church, wherein “good” youth are often the natural leaders not necessarily the ones with deep questions, and nearly all male ‘callings’ are positions of power (in sense of the ability to make decisions for the group, or to instruct the group) and few positions are that which naturally fits a stereotypical introvert (there are no researchers, or silent advisers, at least not that I typically observe being called). All that being said this is a bias inherent in the culture, not a sweeping universal description of modern reality without exceptions. In the spirit of critiquing the cultural bias towards praising extroversion over introversion “Quiet” is an excellent and perhaps a needed work to be read and discussed by introverts and extroverts (as was done here).

Though, after the first chapters were used to establish the presence of the bias towards extroverts, I think the water gets unnecessarily muddy. In order to keep the terminology simple Cain introduces lots of other concepts or traits that might reasonably be linked to introverted personalities, but eventually sneakily shoves them all under the umbrella of introversion. Openness to experience, conscientiousness, agreeableness, neuroticism are all actually unique aspects of human personality not necessarily connected with introversion, but I suppose as often is expected in popular science literature, broad sweeping descriptions supplant nuance and complexity. Accuracy is sacrificed at the altar of readership. Cain does have an escape hatch for this oversight (the note on the terms Introvert and Extrovert found at the end of the book) though I think all readers would benefit from that note being placed perhaps in a preface to alert readers of the simplifications the author makes throughout.

While reading the book and thinking about personalities traits I find in myself I resonated with sections of it but was perplexed by others. I felt this same way when reading interpretations of various personality types (I’m an INFP). There are parts that make a lot of sense and others that really don’t. I get tired of party atmospheres and enjoy reading quite a bit. I also have been confident in my public speaking skills since I was 19 years old. I am often impulsive and quit problems sooner than I probably should as an “introvert,” but I also completed a PhD which seems to be indicative of persistence. I felt keenly aware of all my contradictions while reading this book (and while reading about Meyers-Briggs personality types, which seem curiously like astrological predictions) probably because I was trying, as the author seems to also be doing, to describe the entirety of my “self” in a paragraph description you might find in a catalog, or a nicely packaged list of traits found in my personality resume. I just don’t think this works. It is alluring to simplify and categorize the world we occupy but when we practice this kind of organizing effort we must recognize that we will fall short of accurately describing reality. In effect, this kind of organizing does help us better digest reality, despite it’s limitations. So we’ll continue to do it, as is done in Cain’s book, but just realize that there are always parts of us that resist any stereotype.

I think the book is good, even though it could be written better (more accurately), because we as a culture would benefit from adjusting our expectations of people and learn to not judge everyone based on our perceived level of extroversion. I believe this is the message of the book and the middle sections were just filler of psychological science findings that were interesting to the author, and to me, but did little to support the important message that the need of society is to accept introvert personality traits as something that has merit on it’s own, rather than force us all to become extroverts in order to be considered successful people.

Two of the best chapters are found at the end. One explains the contradictions that I have felt while trying and failing to categorize my life into one box. This chapter is “When You Should Act More Extroverted Than you Really Are?” which tells us about introverts selectively spending energy on specific tasks in order to better succeed in an extroverts world. The interesting part is that while not surprisingly introverts can play the part of the overtly gregarious and attentive lecturer for a few hours, a few hours of quiet or alone time is needed to recharge his or her batteries before they can continue the rest of the day interacting with others. I find this kind of observation in myself and in my daughter, who needs an hour or two in her room alone reading when she first gets home from school. 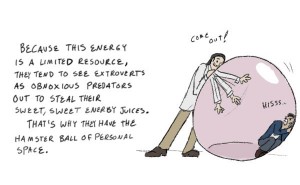 The final chapter was of most interest to me: Cain’s advice on parenting introverted children. The world they live in, meaning their time in school, is designed around the new group-think. Where participation is praised and often equated with thinking and therefor success. Some simple suggestions for teachers include planning for solo thinking time before doing group work, finding appropriate roles for more introverted children to play that doesn’t force them do what they may not be able to (yell out their thoughts with confidence over their internal critical judgement of those thoughts), or simply break the class into smaller groups (groups of 2-3 are better for inverts than groups of 4-7). Not all schools, or classes (like Foods; thinking of you mom) will be able to make these accommodations but many can which to me would be far superior to the one size fits all approach currently espoused.  In addition to school advice simple ways to talk to your introverted child are also included. It never occurred to me that the brightly spoken “Did you have fun at school today?” might not be the best way to get my introverted daughter to share her feelings with me. You see we introverts pick up on social cues and expectations (despite the incorrect notion that introverts are misanthropic beings that simply do not like to talk to people) and the example question is loaded with the implicit assumption that her day was filled with fun. Rather than disappoint me with the truth of a friend breaking her heart and otherwise shattering my hopes of hearing about joy and fun she will sit silent. Often waiting to talk until later after she has decompressed, and using more direct questions like “What did you do in math class?” are going to promote more discussion than broad questions that assume sunshine and roses.

At 271 pages “Quiet” is indeed a good, and fairly quick read, despite it’s flaws, that should promote lots of discussion among friends, should you be able to get them into one room.

This was originally posted on my soon to be famous personal blog (which is a growing repository for my book reviews). 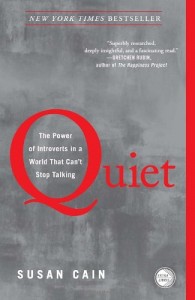