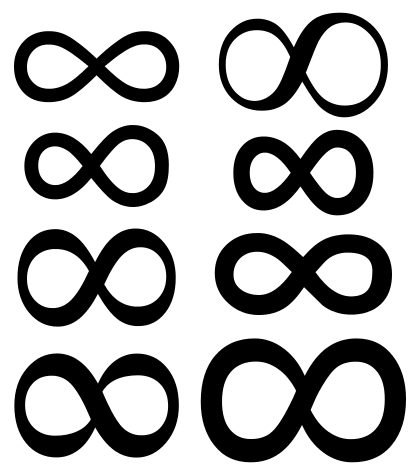 In this third part of my discussion of cosmic assumptions, I explain that not all infinities are created equal. I discuss different sizes of infinity, variation among universes, and assumptions we make about evidence.  See the introductory post, here, and the follow up post, here.

The questions I ended yesterday’s post with are ones we have to ask about every possible universe, if there is more than one. Are the numbers of universes infinite, or finite? Is there stuff between the universes, or does nothing exist except where there are universes? Are other universes finite or infinite? Do other universes obey the same laws and have the same subatomic particles as our universe? All of these are currently unanswerable questions, but the ways we think about God, religion, and any number of other things implicitly affirm certain subsets of assumptions and deny the possibility of others. Extrapolating back to our implicit assumptions can reveal inconsistencies in our beliefs. One of the most disconcerting is revealed when we think about there being no end to time and space in our universe–something many of us assume–and also accept the idea that there are multiple universes. Is it even possible for there to be two, infinite universes? If a universe is infinite, doesn’t it reach everywhere? And if it reaches everywhere, wouldn’t two, infinite universes overlap each other in time and space, and be one universe? The answer to these questions is no.

A line can be infinite and still be infinitely smaller than a plane. This heirarchy of infinities has no end, in theory. Whether it has a practical end in our cosmos is an open question.

Different sizes of infinities is not an idea that cosmologists or mathematicians struggle with, but the rest of us don’t always find it so natural. Infinities come in different sizes. They come in vastly different sizes. Imagine infinitely many libraries. How many books are in those libraries? How many pages? Letters? Ink molecules? Atoms? Getting the idea? But this doesn’t begin to show the scope. There are infinities so big that other infinities might as well be zero, when you put them next to each other. In the limit approaching infinity (you probably can’t really get there), some other infinities are zero. And there are potentially infinitely many sizes of infinity. Our Cosmos (that’s what I’ll call the sum of everything that is) might be made up of finities and infinities nested inside of each other, with some being so big that others vanish in insignificance, while others are so close in size that they have to share importance equally. The accompanying figure is intended to help you grasp this idea visually. First take an infinite series of points, sort of like counting by 1’s from negative infinity to positive infinity. That’s a lot of counting, but it doesn’t compare to the number of points in a continuous line spanning that same range. And a line is infinitely smaller than an infinite plane. Add a third dimension, and you are infinitely bigger. Is there an end? I don’t know. I think some really smart people would be surprised that their beliefs carry implicit assumptions about infinity that might not be true, or at least don’t support their religious (or anti-religious) conclusions. What do your beliefs imply about the infinities of the Cosmos? I’ll come back to that question in the future as we think about various understandings of Mormon Gods. Until then, maybe just try to get used to the idea that infinity comes in many sizes. 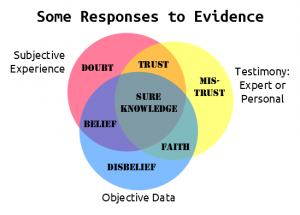 Nearly certain knowledge results when all our sources of evidence agree. When various sources disagree or are silent, we can have many different reactions. A few of the possibilities are shown in this figure.

One key factor influencing individuals’ beliefs is the nature of acceptable evidence. Most of us generally believe scientific data, with varying degrees of common sense scepticism. We are influenced by our expertise, our emotional investment in the subject, and our confidence in the practitioners or reporters of the science. Where we take issue is primarily in interpretation. Whether we can identify them or not, we are at least vaguely aware that scientific interpretation is influenced by human biases and methodological biases. For example, someone like me gives more weight to the professional opinions of LDS Egyptologists regarding the Book of Abraham than to Egyptologists who haven’t shown a deep (or even passable) understanding of Mormonism. It’s a bias I like. Another way we select our biases is in accepting or rejecting personal, subjective experience as credible evidence. Typically, people accept a level of subjective experience as evidence, but require checks and balances on its credibility. We require multiple witnesses in court. We require multiple labs to reproduce results on important findings. We require ourselves, as researchers, to replicate results multiple times in an attempt to reduce instrumental error and subjective, human error. Some psychological research must accept personal experience as real because that is the reality being studied. Where we divide is when scientifically objective reality and subjective personal experience conflict–or appear to.

I am not a cosmologist. I am not a climatologist. I am not an evolutionary biologist. I am a biophysicist, so I have many of the tools to understand and partially evaluate the explanations of these groups when their claims interest or influence me. So I make judgments about evolution, global warming, and the size and nature of the universe based on expert reports.

I am not a Prophet, Seer, and Revelator. I did not know Jesus or Joseph Smith personally. I am not a theologian, nor am I a historian of religion. I have received answers to prayers and had experiences where I believe truth was revealed to me. My grandparents’ grandparents knew Joseph Smith, personally. I’ve read a fair amount, including a modest amount of theology, philosophy, and history. In other words, I have some of the tools to evaluate the claims of professionals and prophets. I have my own witness, but I also trust my grandfather’s testimony who knew and trusted his grandfather, who personally knew and trusted Joseph Smith. It’s third hand trust, but it’s trust earned by lifetimes of demonstrated goodness, intelligence, and love. I trust these personal, subjective experiences. I claim them as evidence, for me. There are at least two other ways to treat these evidences: claim them as evidence for everyone, or reject them as evidence for anyone. Rejecting them for the purposes of scientific study does not require me to reject them as true, only as objective. What evidence do you accept? What checks and balances have you applied to it? These are questions I think you can’t ever stop asking if you aspire to eternal progression.

Most of the assumptions I’ve identified so far are real, undecided questions in Science. Many of them will possibly never be decided, because pushing back the boundaries of the unknown will only reveal another level that leaves the same questions open–just in a different way. This can be unsettling and disconcerting enough that people react with strong emotion. Some doggedly assert that, even if there is reality beyond what we can observe, it is unethical to use that reality as grounds for deciding what we should do here and now. Others tell themselves, if scientists can’t even agree amongst themselves, I don’t need to pay any attention to them. I can just decide that my church, or my personal experiences are right without any reference to what has been measured scientifically. I hope most of us make an effort to find the most productive, middle ground to live in, even if it is harder or less certain.