In the Face of Diversity 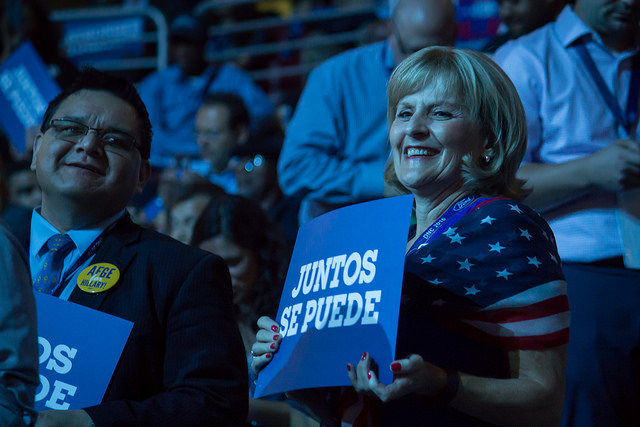 I’m going to share a couple of impressions of the opening night of the Democratic National Convention, but first I want to share a little personal context. I have avoided overtly political posts on Rational Faiths. I’ve tried to stick with Mormon theology, personal Mormonism, and even apologetics. Move on if you don’t want to read politics. But as with most people, my religious beliefs are inextricably tied with my political beliefs (or hopefully the other way around), and I’m going to share some.

I want to make a better world

I care about living in a better, safer, kinder, more loving world, and I feel pretty strongly about bringing the good I have to others. That’s what drove my missionary zeal for many years. I wanted (and still do want) everyone to be welcomed into the joys of Zion, even though I knew we would have to build it together. Sharing good is a big part of why I love teaching undergraduate Chemistry. I feel like strong scientific reasoning is an important tool that can help everyone live a better, fuller life. It’s likely that less than 5% of my students will become scientists, and only one every few years will become a chemist, but it still seems worth it to me.

Women’s rights and equality of income indicate a better world

The second metric is that countries are better when there is less income inequality. Better in almost every way measurable. Go check out this TED talk by Richard Wilkinson and maybe follow some of the links to learn more. It is quite striking.

Truth is not all–the teacher matters

For all of my memory I have believed in seeking truth and seeking to be right. The gospel encompasses all truth, so I should seek to have all truth, like God. I think I love truth, but I have come to doubt the possibility of having all of it–even for God. In the process, I have come to value other moral goods more highly. Atonement and love are much higher on my list. I try to remember the two great commandments, and that in Zion they were of one heart and one mind, and there were no poor among them. Unity is essential to Zion, but I discovered that diversity is, too. Without it, Gods will cease to be Gods. So it seems, in the world I dream of, truth is too big to know alone, diversity is essential to godly success, and we can tell we are headed toward that world when women are measurably safe and part of human progress, and there are no rich or poor among us. All this has made me believe that, for all the amazing white men I have learned from and emulated for a lifetime (and I think it’s a pretty impressive list), and for however good this white man may be at what I do in life, Zion will never truly be until all are alike unto us, not just unto God. Until all are equal in our decision making councils, black and white, male and female, we will not build a new Zion.

I’ve felt the Bern. I even gave one of those 8 million donations of approximately $27. I was sad to have my revolutionary candidate surpassed by a politician I consider smart, ambitious, strong, level-headed, but too tied in to big money and the inevitable compromises that come over a lifetime of such ties. When I got the email that Bernie would be speaking at the Democratic National Convention, I decided to listen to a DNC talk for the first time in my life. I went to the website and tried to find it, and to my great blessing, I only found a seven hour long feed with no indication of when he spoke. I began clicking through the feed 2-3 minutes at a time to see who was speaking. The words I stopped for were predictable, political babble. I skipped past to see who the next political babbler would be so I could get to Michelle Obama and Bernie Sanders. Within a few minutes I started to marvel. Then tears came to my eyes. What I saw was women’s faces, black faces, immigrant faces, Latina and Latino faces, faces of the disabled, and gay faces. The Latina congresswoman from California was inspirational. The daughter of immigrants tore at my heart, as I’m sure was intended. White male faces comprised less than 1/3 of the visible representatives of the Democratic Party. I don’t imagine white men are underrepresented in the Democratic Party, but I know it matters who has a voice. It matters who is represented by our government, AND it matters who FEELS represented by our government. I became an impassioned blogger because I felt how the disaffected from Mormonism had no real voice, and these included people I love. There are good reasons the RNC skewed their speakers to appear more diverse than their delegates, and good reasons LDS media does the same with representing members. Appearance is a kind of voice and a kind of message, and I hope the politically correct efforts at appearance will eventually change the attitudes rejecting the “political correctness” that is really respect for people. I didn’t listen to most of the words, but I was moved to see so many faces of vulnerable classes represented and celebrated on a political stage. I was thrilled to see significant diversity among the delegates as well. I don’t know what mostly was said, but these are the faces I want my children learning from. I want them to know the world and know good leaders from many cultures and backgrounds. I don’t think we can build Zion until we are led by women, by black people and other people of color, and by those who look forward with hope and determination toward the future we will build, not backward toward an imagined perfection that never was–on this earth or any other. I’m glad to follow good leaders past and present, and an increasing diversity of leaders in my life.

I’ll end with a few more political thoughts inspired by Michelle Obama’s speech. I think it matters that a black school child could ask President Obama, “Is your hair the same as mine?” I think it matters that children have chosen to write book reports about the Obamas for their school classes. I think it matters that black children can imagine doing good for the world as President of the United States of America. And I imagine four years from now my elementary school aged children choosing to write a report about the life of the President of the United States. I hope they will not learn: I can remain rich and powerful by running casinos, being a reality TV star, treating people with disdain under the guise of false honesty and candor, and using law to avoid paying people their fair due in my business dealings–and that makes me fit to be President. I hope my children will be proud to think: I can live a good, courageous life, fighting for women’s and children’s rights, using my gifts to help the vulnerable, making hard decisions and difficult compromises, treating people with respect, living through family sorrow and betrayal, having my name smeared through mud, making mistakes and even wrong choices, but going forward with hope–just like the President of the United States. I hope that is the message they will see.