The Horror of the Empty Tomb 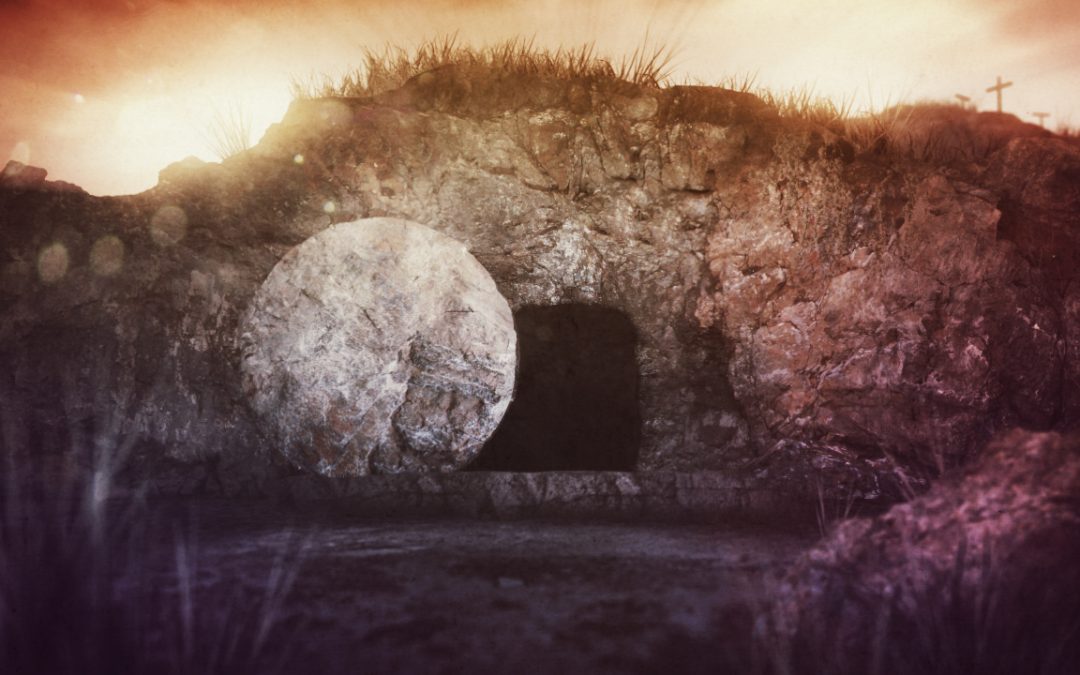 The four Gospels agree that women were the first to encounter the empty tomb, and were therefore the first witnesses of the first signs that Jesus had risen from the dead. Mark tells us that Mary Magdalene, Mary the mother of Jesus, and Salome are intent on visiting the body of Jesus, perhaps to anoint it with spices, when they see the stone at the entrance has been rolled away. Inside the tomb is a young man (or angel) who tells them that Jesus has risen, and bids them find the disciples to tell them he is already headed for Galilee. The women then flee the tomb in fear.

According to Matthew, an angel appears whose presence shakes the earth. The angel rolls away the stone, leaving the guards at the tomb paralyzed with fear. Mary Magdalene and Mary the mother of Jesus have come to visit the tomb about that time and the angel tells them not to be afraid but to go see for themselves that Christ has risen. Then, he says, go find his disciples and tell them the good news. Hastening from the tomb, emotions mixed with both joy and fear, the women make their way back to the disciples. But Jesus appears to them first. Do not be afraid, he says. Go find my brothers and tell them I go to Galilee.

Luke tells us that the women make it all the way into the tomb, where they discover that Jesus’ body is absent. Two men appear, and, frightened, the women bow their faces to the ground. But the men tell them that the living is not among the dead. They remind them of Jesus’ former detailed prophecies, that he would live again. Yes, they remember, he did say that.

According to John, Mary Magdalene visits the tomb alone. She sees the stone has been rolled away, and immediately seeks out the disciples, telling them his body must have been stolen. Two of the disciples–Simon Peter and John–set off on a dead run for the tomb. They find only linens and a carefully folded burial cloth. It must be true, they think. He has risen. They leave. But Mary lingers, distraught. She looks into the tomb and sees two men siting where Jesus had lain. They ask her why she is weeping. They’ve taken my Lord away, she replies, and I don’t know where they have put him. She turns and sees Jesus standing there, though she doesn’t yet know it is him.

What precisely were the women thinking and feeling as they rushed away from the empty tomb? What were the disciples thinking and feeling as they hurried to the tomb to confirm the women’s story? Certainly joy, as Matthew tells us. The thought of possibly seeing their beloved friend and master again would no doubt evoke feelings of elation and anticipation. According to the four accounts, however, encountering the empty tomb primarily provoked feelings of fear and unease. We have no reason to believe that this fear was due to anything more than the shock of learning that the dead had actually risen, and being uncertain what this would mean for them and the movement to which they had devoted their lives.

But what if we imagine that a slice of those fears–just a tiny fraction, buried deep enough in their psyches that even they aren’t conscious of it–is the fear that Jesus’ empty tomb is the sum total of the most unspeakable horror that humankind could ever be confronted with? Something so horrible that we have taught ourselves over many millennia to desire it above all other things in order to avoid a truth so terrifying that truly contemplating it could drive us mad? Which is: Life will go on.

Life will go on, Jesus’ miraculous rising informs us, and there’s nothing we can do about it. There is no escape from having to find ways to endure our existence forever and ever. The apostle Paul would soon definitively finish the Angels’ work by utterly destroying the stone rolled from the tomb, declaring that Christ had conquered humankind’s greatest enemy, and all would benefit, saint and sinner alike. Christ’s resurrection was an unmerited gift that every conscious being has no choice but to receive and bear.

Naturally, it is said, this gift is the greatest gift of God, the purest and most powerful manifestation of divine grace. Who would not want to live forever? Who could not look forward to an eternity with loved ones? Are we not helpless to do anything but fervently rejoice forever in the face of such a proposition?

Maybe not. Steven Peck’s sobering A Short Stay in Hell explores the possible ramifications of living forever, where the finality of death is never a possibility. The protagonist, Soren, endures countless eons of time in hell, forming relationships, encountering enemies, driving himself mad with despair as he searches for the book of his life in an incomprehensibly vast library. Once he finds it, he will be able to exit hell and enter paradise.

But what then? Obviously “paradise” is precisely the opposite of hell. If we must live forever, of course we will desire to live there. Presumably, everything we enjoy about mortal life will constitute Paradise, but amplified far beyond our wildest imaginations. Perhaps we are with friends and family, and we have bodies that are immune to disease and the ravages of old age. Perhaps there is an eternity of wonders to behold, and tasks and adventures to fill our endless days. After all, when we are in the midst of those things that bring us joy, how could we not wish that they would continue forever? But should Soren finally make it to Paradise, he would nevertheless be haunted by what he’s experienced in hell, which wasn’t fire and brimstone, but time’s relentless erosion of the real possibility of ever-enduring relationships and endlessly meaningful tasks, projects, and adventures. All of the things we enjoy and that provide meaning to our lives are indexed and framed by time; we live our conscious existence second by second, hour by hour. We often experience this joy and this meaning as deepening over time, and assume that such will continue to be the case throughout eternity. Peck helps us to see, however, that this might not necessarily be the case when stretched over truly vast periods of time too enormous to comprehend.

But no matter. Death is too terrifying to face without the hope that our worlds won’t come to a final end. Immortality might wear on us somehow, but that’s far better than the alternative of nothingness, a vast amount of meaningless waste that is a universe that passes away and is totally forgotten.

And for Mormons, not just immortality awaits us, but godhood. To live the life that God lives. Was this not the ultimate purpose of Christ’s sacrifice? Eternal life, not just immortality. God’s life. But what is God’s life? According to scripture, God’s life is, in essence, human life, not only in the sense that we have usually understood God to be an exalted and glorified human, but also in that he devotes his life utterly to human lives. Does God’s life include the pleasures of spending time with his family, or exploring a star system he’s never seen before, or finding meaning in a particularly challenging task, or stepping back to appreciate his own works? Possibly. Yet scripture reveals God doing none of these things, or other supposedly paradisaical things that would make living the life of a god worth the tragedies and sufferings of this life.

Instead, we see God suffering with his creations. Unremittingly. Theologians have become more and more taken with this idea over the last half century, that God is the being most affected by every other being in the universe, the one who must feel and suffer the most because of his intimate relation to all that is. Perhaps this could also mean that God also experiences the most joy, has the most fulfilling individual existence, etc. Perhaps. But again, where we see God as an actor in and on the world, God is weeping, suffering, dying, crying out in loneliness and forsakenness.

And what if that is what it means to live forever? Surely no more noble a life could be conceived, a life that exists to help others, forever without end. But we know what it means to help, to truly help, to really mourn with those who mourn, to comfort and relieve, to suffer with, to leave no one behind, not one. Neck deep in the blood and mud, all the time for all time, for there is always more, always another broken heart to mend, another shattered life to piece together, another life to save, another world to bear up. If there is anything we are sure about our God, anything we need our God to be, it is this kind of being, and therefore eternal life, which is God’s life, is this kind of life.

Maybe knowing this, Jesus awoke from death sobered that he was still alive, feeling the heavy immensity of the endlessness of what awaited him settle into his now immortal bones. Perhaps he gingerly stepped out of the tomb, anxiously looking for that first person who would cross his path, that first person he would look at and know what kind of life his sacrifice had consigned that person to. This was the way of the gods, this was the divine natural order of things, and yet the way was hard and relentless. Certain kinds of burdens might be put down only to have other ones taken up. If you are a conscious being in the cosmos, your consciousness has signed a contract for you to be one who counts, who can be counted on, forever. You could violate the contract, of course, temporarily–everyone does at some point, some even for the entire duration of their mortal lives. But eventually you would come around. They all will. Time would see to that. Eventually you would take up the call to run to those who are suffering. Eventually, the cries of the suffering would be all you would hear, for the universe is filled to the brim with them, and usually at pitches and tones no one but a god could make out. And that’s life. That’s what it means for life to go on. Noble and grand in a way, perhaps, but ultimately simply the way things work if immortality is your thing. Which it is, or will be, since that’s one ticket you can’t return. And in that sense, the empty tomb might be as much a horror as it is a gift to all of us who live in the looming shadow of an inevitable death and an inevitable resurrection.