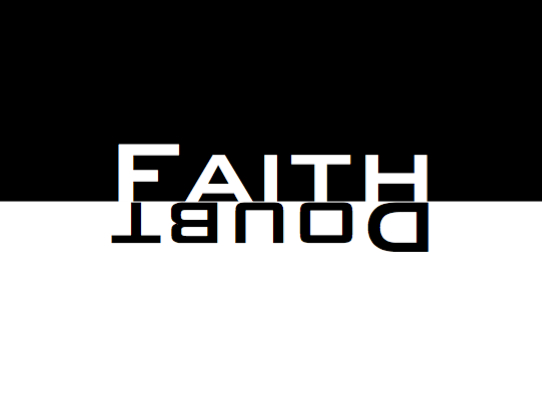 Members of the LDS church will frequently use different definitions, or versions, of the words faith and doubt. The two most common versions are what I call “truth-oriented” and “objective”. It’s important to realize that many, if not most, of the debates we have on the topics of faith and doubt are due to conflating the two versions. We think we’re using the terms in the same way but we actually aren’t. The secret to overcoming this disjoin of meaning, which should cultivate general agreement, is the context. The context will reveal the different meanings.

A more orthodox church member will generally use the term faith to mean a belief in something that they perceive as a universal reality. The term doubt is used to denote a disbelief in these perceived truths. So when they hear the term doubt used in conversation they automatically assume the doubter is disbelieving an obvious and universal good principle or truth. From this perspective faith and doubt are always used in relation to what they perceive as the TRUTH.

Less orthodox members generally use the term faith to mean a general belief in something that seems to be true or good – independent of source and independent of the ramification. The term doubt is used to denote something that from an objective approach does not appear to have enough evidence to be believed (faith). They see the world as more nuanced and see different degrees of truth and error. From this perspective faith and doubt are used in relation to any concept, with the acknowledgement that faith and doubt can each be associated with true and false ideas.

In another example, a person may doubt the belief that God quickly gives you whatever you pray for and instead puts faith in a belief that God is not a vending machine and that there are a lot of variables to prayer (nuance). Was doubt bad in this situation? Nope. I think the person has moved on from an immature view of God to a mature one that matches reality. If the person puts their faith in the idea that God never answers prayers because there is no God, then they will have made a very poor faith-based choice in the view of theists.

Do you see the difference between the two versions? Truth-oriented is absolutely tied to what the person has identified as truth and goodness, while objective is well…objective, including a spectrum of true and false beliefs. The objective version allows faith and doubt to both be good or bad depending on whether the claim is true of false, while the truth-oriented removes falsehood from the conversation. The tricky part is finding what version people are using when they communicate. If you don’t identify the author’s version then you will be offended, annoyed, angry, etc. and probably think an author or speaker is ignorant. The reality may in fact be the opposite.

Take a look at some examples with the intent of understanding what faith and doubt mean in their context.

No Doubt to Know

Trying to find a way with Scriptural understanding to reconcile the honest search for Truth and the spiritual destructiveness of unbelief, I found that doubt is not a positive attribute. As described by prophets and the Lord Jesus Christ, doubt is the enemy of faith. Unbelief is slightly worse because of a more concrete condition of the mind and heart, but they are both related to each other. Doubt doesn’t lead to faith. It destroys it by leading to questioning everything; even miracles that we participate in by the Grace of God.

It would be better for them to repent and stop finding fault with the history, theology, and leadership. For those who seem to cling to their doubts as if a virtue, perhaps they should consider (as some already have) that differences are irreconcilable and time to move on.

When Doubts and Questions Arise

…The power of doubt to destroy faith, hope, and even family is diminished the minute one sincerely says, “I will do the things the Lord has commanded, whether my questions are resolved quickly or ever, because I have covenanted to do so.” The difference between a faithful “I will keep the commandments because …” and a doubtful “I will keep the commandments if …” is of powerful and eternal import.

It is perfectly normal to feel concern and uneasiness when confronted with an unfamiliar idea, especially if it challenges a strongly held belief. What matters is not letting that uneasiness turn us from our covenants during our search for answers. I have learned from personal experience that we cannot turn our back on God and then expect Him to answer our questions on our terms. It takes faith to continue keeping the commandments while our uncertainty is being resolved. It may be tempting to withhold or limit our obedience pending convincing resolution of our concerns, but this is not God’s way.

The Spiritual Nature of Doubt

When religious paradigms break apart through critical analysis, it is natural for believers to experience doubt. The spiritual distress that accompanies uncertainty can be incredibly painful. And this is a problem, since as humans, we have been endowed with a natural aversion to pain—even the emotional kind that accompanies religious doubt.

…As believers, we should neither embrace apologetics, nor fear religious doubt; for doubt by itself is neither good nor bad. We should doubt that which is not true.

Is it OK to Have Doubts about the Gospel?

It is normal to have questions about the gospel and even to experience doubt. Pondering your unanswered questions can often be healthy if it motivates you to sincerely seek greater knowledge and truth. In addition, such questions are often part of “the trial of [our] faith” that is required before we receive a witness from God (Ether 12:6). However, doubt is a dreary destination, so it should never be a goal in itself.

Why I Generally Use the Objective Version

The major benefit of using the objective version is that it allows for discussion, or the exchange of ideas.

The truth-centered version, while valuable for making statements in a setting where all are in agreement on what is truth, is simple and to the point. Faith = faith in the truth = good, Doubt = disbelief in the truth = bad. There is nothing to discuss. It is as if all truth has been found and is constant.

The objective version, on the other hand, is (and has to be) used when the truth is not readily apparent or there is a difference of opinion on what the truth is. In a discussion where all are not in agreement with regards to what the truth is, saying you have faith in something is a provisional statement. It is subject to change. The objective version is a concession of the need for epistemological humility and acceptance that we are on a search for truth.

A Couple Good Quotes Relating to Faith and Doubt

All doubts, however skeptical and cynical they may seem, are really a set of alternate beliefs. You cannot doubt Belief A except from a position of faith in Belief B.

-Timothy Keller, The Reason for God

I think that we need to get a feel for the very positive, constructive role that doubt can play in a spiritual life. You and I, we have a lot of wrong ideas about things. We are attached to a lot of very selfish, very biased perspectives. If we are not brought to the point that we don’t doubt our own stories, if we are not brought to the point where doubt functions as a kind of solvent that loosens my attachment to my own version of things, then God is going to be limited in how he can reach out to me, and help me, save me, change me. God wants to make me into something more than I am, but part of that is going to involve my letting go of things that I don’t need to be hanging onto, because they are wrong, because they are false, because they are selfish. And doubt plays a powerful, important, positive, spiritual role in that story by being the solvent that frees me from what things I have to let go of. If we don’t have any doubts in our lives than we don’t have any room to change.