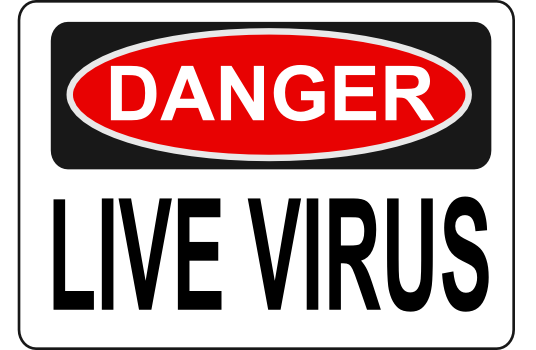 My most read posts in the past include a review of An Insider’s View of Mormon Origins, a personal response to the Letter to a CES Director, and a series of posts exploring the science of stylometry as it applies to the Book of Mormon. In each of these I took a decidedly apologetic stance.

Because of these posts I have found a few people who really share my Mormonism. That is a true joy. Progressive believers are a numerically rare breed. Progressive, literal believers are even fewer, and I don’t live near any of them–at least not any who are out. I live in a loving community that welcomes my differences, but we all know that isn’t quite the same thing as feeling safe at home. But there have been others who have embraced my apologies to support much more conservative Mormonism. I want to warn you–you are inoculating with the live virus.

With this list I may not have provided a defense of all of Mormonism, but it’s a pretty substantial list of Mormon truth claims. I stand by it. While I have questions that remain, and I continue to examine particular details that I have reason to suspect are incomplete or incorrect, nothing in my ongoing readings or in the numerous responses I have had to my writings makes me expect major revisions. That’s a pretty comforting intellectual position, and I like sharing it. I’m glad when others find strength in it.

It’s true. I defend basic beliefs of Mormonism that many, many Mormons consider important, and I provide reasoning that is supported (you can decide if the support is sound or not) by philosophy, science, and logic. I give reasons for the hope that is in us, and that makes us feel good about the things we already believe–me included. Occasionally it gives unbelievers pause (or so a few have told me) to say, “I could see how someone believes like you do. I might even want to live in a cosmos like you describe . . . if I could believe.” Yet since we are all inclined to see what we want (and are prepared) to see, I want to explicitly point out some of the dangers to typical LDS beliefs that you are risking when you adopt my apologetic defenses of faith. The connections may not be clear, but fortunately or unfortunately, most of my beliefs come as an interconnected package. If you try to split one part out, there is a good chance the reasons for other parts will begin to unravel. I’d love to help you see these connections, but for now you get a list. Read the links and ask me specific questions, or just enjoy whatever thoughts and questions come to you as you review this web of thought:

I have defended LDS beliefs, but as you can see these defenses come at a cost. There is no rest, and little certainty, in this worldview that scientifically defends Mormonism. There are a lot of reasons to trust both God and others, including LDS leaders, and to persevere in the face of difficulty and doubt, but there is no room to relinquish personal moral responsibility–even to the servants of God. Apologetics are a dangerous road. If they preserve your previous Mormonism intact, your arguments are probably flawed or poorly informed. If they change you, there is no guarantee you will like the changes–or that your family or friends will. Yet the glory of God is intelligence, and while we are here to love, knowledge is required to choose the most loving actions.

I know there are defenses (and criticisms) of Mormonism that differ from mine. I even find some of them logical. I hope I have given you a glimpse of the interconnectedness of my apologetics. It’s easy to make mistakes in this endeavor, but mine is not the kind of approach that lets you pick and choose freely which arguments you adopt and which you discard. Our choices are constrained by deciding to give reasons for the faith that is in us, and claiming science, philosophy, and logic as the foundations of our reasons. You can’t show a multi-authored Book of Mormon without recognizing the tribalism, racism, and sexism of its prophets and the limitations of God. You can’t have a material, evolved God and claim sound reason in denying the priesthood to women or marriage to Lesbians and Gays. There may be other ways to have your cake and eat it, too, but I don’t have one for you. So take care in following me too closely. The results of inoculation with my vaccine may not be what you were after. But I think it helped me, and I do love good company.