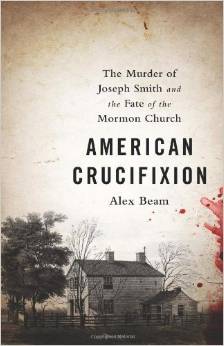 For those too busy (lazy; often both in my case) to read this whole thing: the book is great; it reads more like a novel than a dry history book; it’s fair in its treatment of history although it sacrificed historical nuances (Mormons and “Mormon-haters” are each likely to find interpretations they disagree with) in favor of a narrative flow. Now, for the actual post:

Humans are creatures of narrative. Stories grant structure, purpose, and meaning to our lives and decisions. Without a story, information seems lifeless and abstract. One might say that a major failing of transmitting/teaching history (or science, or just about any subject) is our failure to put the history into a compelling form of a story. I say all this to preface my review of Alex Beam’s new book “American Crucifixion: The Murder of Joseph Smith and the Fate of the Mormon Church.”  The book opens with some fantastic imagery painting the scene of Joseph, Hyrum, Rockwell, and Richards sailing across the Mississippi river in their soon to be abandoned plan to hide days before the martyrdom. I mean, check out the first sentence: Just after midnight, four men cast a shallow-bottomed skiff into the roiled waters of the raging Mississippi. The descriptive language really paints a detailed picture. For me, the book read almost more like a novel than a history book. I found myself captivated, compelled to read ‘just one more’ page even though I’ve known this story since I was in diapers. I did not expect that at all, and it was a very pleasant surprise. I’d personally classify this book as “creative non-fiction” or “narrative non-fiction.”

For people who love reading Mormon history, there likely won’t be any major revelations in this book. I felt that way myself through the first several chapters, but then I found that I really didn’t know much about the people on the other side of the early Mormon conflicts. For Mormons who haven’t ever read any scholarly history of the church, then they might be in for a surprise. In this story Joseph isn’t presented as a man who spoke with God and restored the priesthood, but rather as a man who seemed to genuinely believe he was and with a devoted people who esteemed him as such. As a result, some Mormons will likely not consider it worth reading. Interestingly, I think that some people who consider Mormonism to be a fraud will also take issue with how Beam told the story; they’ll be irritated with how nice Beam was to Joseph. I talked to someone who read the book and felt that the book painted an inaccurate and unfair picture of Joseph and they said that it was a good read. The story-telling is great and will likely make the book enjoyable even for those who have problems with historic simplifications. In fact, I think that Beam’s choice to pick one interpretation for each of the various historical issues was essential to the style of the book. You can’t really have a good narrative flow when you stop and discuss all the conflicting historic accounts and the even greater number of possible interpretations. Collapsing historic controversies into one interpretation is guaranteed to alienate some and annoy many people. However, the resulting story was worth the cost in my opinion.

The book is divided into 3 natural parts:

The background covers enough detail to allow someone totally ignorant of Mormonism to understand the more significant topics essential to understanding the martyrdom. We learn stories from Joseph’s life to bring life to him as a character in the story. We learn about the saints gathering to Zion in Missouri and their extermination from the state. We learn about polygamy, the council of 50, and other Nauvoo-era developments. The background is specifically crafted to act as a prelude to the martyrdom, and as such especially focuses on Nauvoo. The story of the martyrdom is great. We learn details about the lives of those involved, both Mormons and “Mormon-haters” (a term used seemingly interchangeably with anti-Mormon in the text). It was also interesting seeing what was happening in Carthage, Nauvoo, and elsewhere in parallel. It could easily be made into a screenplay in the style of “24” (in particular I’m thinking of the split screens). Beam does a great job weaving the allegory of the crucifixion of Christ with the martyrdom. This is especially true when discussing the weak and torn Pontius Pilate of our story: Governor Ford. I hadn’t read much of the history of Governor Ford so it was great to learn more. It was interesting to read about the “trial” of the murderers and to have a reminder of how our justice system worked (or didn’t) at that time period. One part that stands out to me is the description of the wake or viewing of the bodies of Joseph and Hyrum in Nauvoo. It was very moving. Images of it that stand out still for me weeks after reading the book:

Part three details the Saints reactions, the schism of the members, and a general overview of the major sects.

If you are a person who has a strong opinion about Joseph Smith one way or the other, and can’t stand to read an account of Joseph Smith that has a worse (respectively) interpretation than your own, then read at your own discretion. For others, I’d say go read it. It is an unusually engaging account of the martyrdom. Additionally, because this was written by a journalist who has written novels featured in the New York Times “Notable Books” list, it is likely to get a much wider readership than most books about Mormonism and Joseph Smith. As a result it is likely have a greater impact on the public perception of the martyrdom than most (if not all) other books. So check it out.