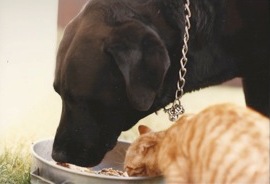 I have always been a dog lover. I grew up in a dog family. In fact, we were a Lab family. We hunted ducks with, wrestled with, and slept with Labrador retrievers. Thinking of those big dopey dogs sauntering up to me with a stupid grin on their face, while dripping of water and saliva, and hoping for a sniff/lick/kiss or a dog-human shoulder hug brings a smile to my face and a tear to my eye. Labs are great dogs even though they drop hair all over you. Let me tell you about my dogs. 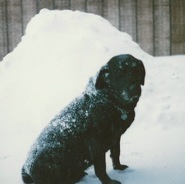 Shadow Dillman: Born 1978-79. He lived with my grandparents until 1986 when he moved in with us. He was king of the backyard, and made sure to wear down the proper walking paths through the grass. He was big enough for me and my friends to ride in our backyard rodeo. He put up with a lot but wouldn’t let the cable guy or anyone else he didn’t really know in the yard. He attacked flowers (the fireworks, not the plants) and was afraid of thunderstorms. Our sliding glass door was permanently coated with saliva and toenail residue. He was a great retriever and was inclusive enough to share his food bowl with the likes of felines. 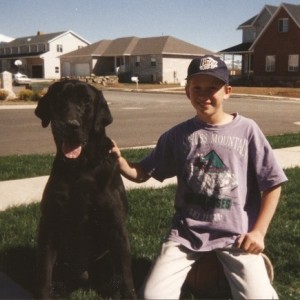 Artie Dillman: Born 1995. He grew to weigh over 128 pounds and was the height of a Newfoundland but much more lean in build. He was a brave Black Lab who learned to hunt ducks when was learning. We worked ourselves to death walking through the marsh but I know he worked harder (I have the pics to prove it). I would walk him down the street and the neighbors would say things like “Nice Horse!” because he was so tall. One day he was hit by a car and destroyed the car headlight by putting his head inside it. He got up eventually and grinned at me with blood running down his stupid smile. I loved having a gentle giant as a friend to rest my head on and talk to on lazy summer afternoons. Sadly his rapid growth led to him having severe hip pain/problems. He didn’t live as long as most Labs. 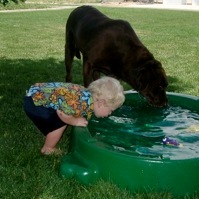 Tank Dillman: Born 2001. He was born a few months before I left on my mission. I saw him grow then I disappeared. I feared he wouldn’t know me or like me when I returned, he liked me just fine. Until Tank, dogs weren’t allowed in the house. I got a letter from my mom on my mission stating that Tank was keeping her feet warm. It blew my mind. She often complained about the “dumb dogs” but Tanks gentleness won her heart over. He attached himself to my younger brother. They often shared the couch and his bed, like brothers bonded in naps rather than blood. Tank tore both ACL’s while aggressively retrieving a throw toy one day. He made up for it by depending on his front legs more. He grew powerful muscles and was a fantastic dog to observe. Tank was the best dog that ever walked the earth.* He was brave and obedient. He was protective of his family and extremely gentle and patient with children. He had dog friends at my grandmother’s house. They would chase each other all through the fields and ponds. Tragically he was hit by a car one day and was killed on-site. This tore us all up inside, especially my mom. He was part of the family. 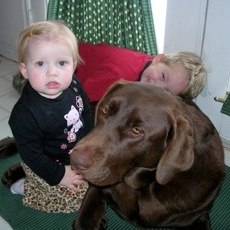 Bob Dillman: Born 2005. I got married this year and moved away. Raising Bob was up to my parents and youngest brother. Bob was a scaredy-cat right from the start. He would jump when we wheeled the trash can out to the road. He wasn’t much of a good retriever either. I remember pointing to his toy in the yard after I had thrown it and he looked the other direction in bewilderment wondering “Where is the damn rubber bone? I really, really, really, really wanna get it!” I don’t know if Bob had that much thought going on in his head. He was deeply loved though. I think he became my mother’s dog because he was always obedient and defensive of her when some scary sibling or brother-in-law of mine dared come in the back door after dark. He loved being around people. He wouldn’t sleep by himself during the day he would follow you all around the house and flop down where ever you stopped. Only to get up and move again once you found what you were looking for and went somewhere else. As our family grew and my sister and I were having small kids we loved Bob even more. He’d let those buggers climb on him all day. He needed us and we needed him. Unfortunately like the rest of our dogs he went the way of all the earth as well.

Why am I telling you about my poor dead dogs on a religion blog? Religion is supposed to tell us how to live, presumably in a good way. Sometimes, maybe often, it fails, or we fail it for many reasons. I think we should be like them, the dogs that is. We should have love that is undying. We should be content. We shouldn’t care about how someone is dressed or how they smell. We shouldn’t care so much about how we smell or if we have slobber dripping from our mouths (maybe care a little bit). We should know implicitly that we are loved, and return the gesture to others. We should know that it is okay to have irrational fears and hopes. We should know that we always have things in common even if we are all very different from each other. We should be always loyal to one another, despite our differences.


*This fact is indisputable and not up for discussion.