A Glimpse into the Spirit World 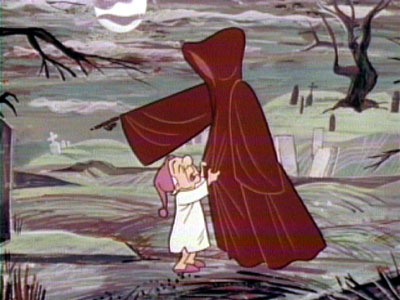 “‘I am in the presence of the Ghost of Christmas Yet to Come?’ said Scrooge.

The Spirit answered not, but pointed onward with his hand,” – Charles Dickens, A Christmas Carol 1

I have always found this image from Charles Dickens’ A Christmas Carol – whether the George C. Scott version, Disney’s, or my personal favorite Mr. Magoo’s – rather creepy, and I guess it is meant to be. The Ghost of Christmas Yet to Come is a spectre to be feared above all others, yet images of this mysterious, faceless Presence whose bony finger points ahead in silence remain etched in our memories at this time every year. The future remains amorphous and undetermined; a spectre in time. The future is the great paradox; a source of expectation and dread all wrapped up into one neatly little packaged gift.

And yet, in the end; as Ebenezer Scrooge reaches his hands out in prayer, vowing to change his ways, the spectre alters its form and fades away into the bed sheets, offering Scrooge a renewed chance at life.

It is no surprise to me that Victorian Era classic has a special resonance with Mormons, with this being one of Thomas S. Monson’s personal favorites, which he makes it a point to read once every Christmas.2 If I didn’t know better, I would almost assume Charles Dickens was a Mormon based on his repeated references to the Spirit World alone, which he sees as a very real, though hidden presence in our lives.  According to President Monson, “During the course of the night before Christmas, Scrooge is shown what he once had in his life, what he has in the present, and what his life will be if he remains on the path he has thus far chosen. He is able to recognize the error of his ways.”3 Perhaps if it were not for concern expressed by his old business partner Jacob Marley, these things would not be revealed to Scrooge from the other side.

Recently I had my own encounter with a “Holiday Ghost” from the past – my Mother-in-Law who passed a couple years ago from Alzheimer’s. Since I married a much older man, she and I never got along in real life during the brief time we knew each other. Two summers ago, she made an appearance at a Relief Society event, and several others felt her presence too, with the message being relayed to me that she was seeking my forgiveness. Of course, I forgave her.

About a week ago, my friend who is also the Family History Consultant at church got a message from her concerning Temple-related stuff, and apparently I misunderstood the message – so much it upset both me and my husband, and my husband got angry. This past Sunday, I spoke with my friend and she proceeded to clarify the message. Needless to say, I was late for Relief Society, but the issue “from beyond” was resolved, much to my relief! I never thought for a moment I would be having arguments with my deceased Mother-in-Law from “the other side,” but I’ve seen stranger things!

I have a firm testimony the Spirit World exists, and I tend to agree with President Monson that there is something powerful – perhaps even inspired – about Dickens’ A Christmas Carol. Through this experience, I have resolved to try to do better each day in my relationships with others, so that when do I pass on to “the other side” I won’t have as much unfinished business to resolve.

So, in the words of Tiny Tim, “God Bless us, Everyone!”