Why I Turned In My Temple Recommend 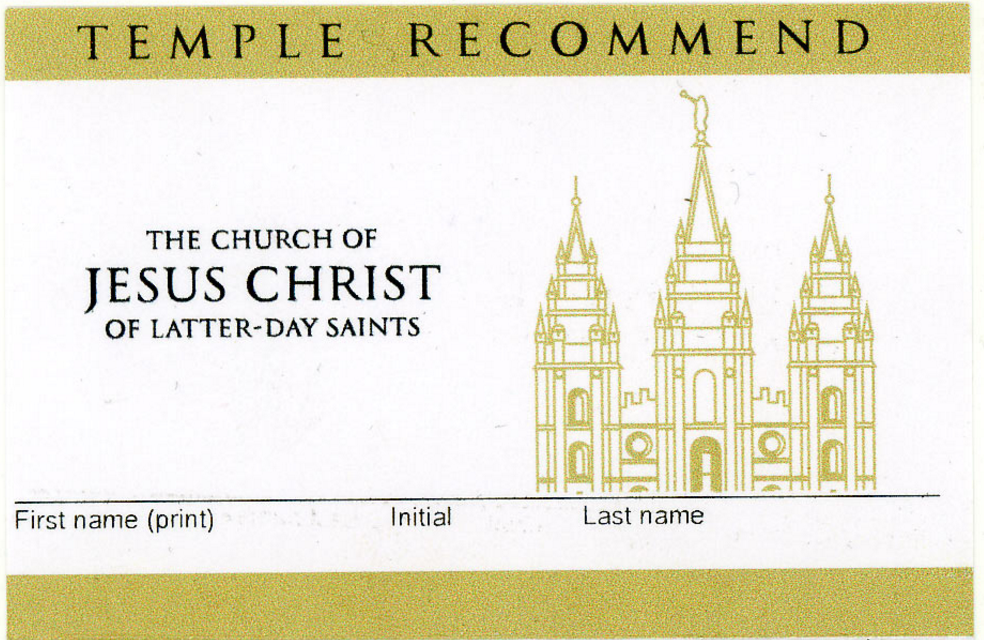 I turned in my temple recommend this week. Folded it between a white sheet of paper, placed it into a white envelope and sent it to my Stake President.

After months of prayer and consideration and after re-examining the temple recommend questions, I have determined that — according my interpretation of the Church’s standards — I am no longer worthy to hold my temple recommend. Not by any sins or misdeeds on my part, but because of my support for same-sex marriage, which the Church openly opposes, and my fervent opposition to recent enacted policies.

As has been noted by many around the blogosphere and on social media, the same standard is not applied for people who commit similar sexual “sins” such as cohabitation (in fact, as that article suggests, in some areas co-habitating spouses not only aren’t labeled apostates, they can be baptized as well). The Church also makes same-sex marriage an automatic apostate offense, while crimes like rape and incest are put into the “maybe” column for automatic apostasy.

It is clear that the Church of Jesus Christ of Latter-day Saints has made defending so-called “traditional marriage” one of its modern-day cornerstones.

The Church has drawn a definitive line in the sand.

I firmly believe that members of the Church can reasonably differ from Church leaders. Indeed, I felt that way when, after experiencing a faith transition that left me with a very different outlook on the Church, I renewed my expired recommend last fall. I felt that my personal differences with how the Brethren interpret Church doctrine and enact Church policy was not to a point that it made me unable to sustain them.

That changed in November.

When the leaders of the Church draw such a hard line in the sand, as they did with these new policies, I feel disingenuous saying outwardly and inwardly that I sustain those same leaders, as that would be tantamount to saying I sustain the line being drawn, which I most certainly do not.

In a recent interview, Elder D. Todd Christofferson explained the reasoning behind the policy toward children of same-sex couples:

“We don’t want the child to have to deal with issues that might arise where the parents feel one way and the expectations of the Church are very different.”

In our house, we teach that everyone is entitled to the same blessings from our Heavenly Parents, whether they be straight, gay, black, white, man or woman. We teach that our Mother and Father in Heaven will not hold us accountable or treat us differently because we were created in a certain way, and that they are happy when we embrace and celebrate our difference. We teach that they are sad when we feel (or are made to feel) ashamed of our differences. We teach that all of God’s children deserve his love and approbation. This includes the opportunity to be united in a loving, committed marriage to a partner of their choosing.

And so I say to Elder Christofferson and the other leaders: Our family is actively dealing with the issues that are arising where we as parents feel one way and the expectations of our Church are very different. But we’re not gay, so our soon-to-be 8-year old is good to go?

This is shameful and disappointing to me. I cannot and will not support this type of discrimination in my church (cue Edwin Woolley). I feel compelled to speak openly about it.

Sustaining is one thing. Then there’s tithing. I came to the conclusion that I personally cannot in good conscience continue to donate money in the form of tithing to an institution that implements policies of blatant discrimination against the LGBTQ community.

Upon further examination of the requirements of holding a temple recommend, it would also be inaccurate for me to say that I do not affiliate with, agree with or support individuals or groups whose teachings or practices are contrary to those accepted by the Church. With the line in the sand now drawn, and the renewed emphasis on “defending the family,” it feel disingenuous to not interpret this question as relating to support for same-sex marriage and same-sex married couples.

In fact, I do fully, openly and proudly support many individuals who are gay and married. I also support groups and organizations — such as PFLAG — that not only support, but openly advocate for marriage equality, which is in direct opposition to the Church’s teachings.

It is vital for me to note that this decision was not made lightly. It is based on years of personal prayer, praying together as a couple, and personal revelation we have received on this specific matter. I believe, based on the same pattern of revelation received throughout my life and including on my mission that the Lord has revealed to us what He would have us teach to our children in our home. We believe firmly, just as surely as we believe in the Gospel, that the Lord has sanctioned this course for our family.

It has been a difficult spiritual and intellectual journey for me the past several years to get to a point where I felt not only able to, but excited about holding a current temple recommend. To be back at a point where, in order to be honest with myself, I have to give up my temple recommend (and all the social trappings that come with it) is personally devastating to me.

But in reality, this is not about me.

My pain and discomfort absolutely pales in comparison to how devastating it has been for many of my brothers and sisters who are gay to see the actions the Church has taken in the last few years, especially the recent policy changes. It pales in relation to the pain this has caused the families of same-sex married couples and their children. It does not compare to the heartache it has caused for gay LDS teenagers and their parents, who wonder what the future now holds for them.

If the Church is drawing a more clear line in the sand – which I believe it is through these changes – this is me simply finding a tangible way to stand on the side of love, support and inclusion toward my LGBTQ brothers and sisters.