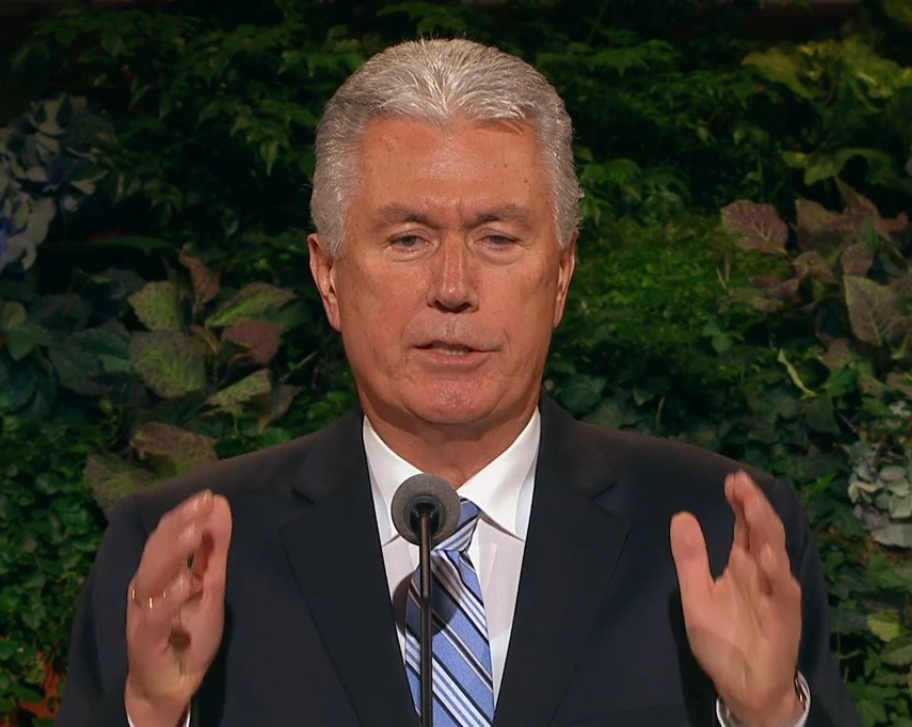 The following video…[iframe width=”420″ height=”315″ src=”//www.youtube.com/embed/jofNR_WkoCE” frameborder=”0″ allowfullscreen]
made me think of how many Mormons don’t really hear what our Silver Fox, President Uchtdorf, says. This compelled me to write a loose parody of the song highlighting the inspired teachings of the Silver Fox.

At Conference, we often learn particular themes of what various Apostles will speak about. For example, people can do a great impression of how different Apostles would eat a Reece’s Peanut Butter Cup.

Elder Packer will talk about the Family Proc.

Elder Scott will have a soothing, sleep-inducing voice.

President Monson will share several stories and quote lots of things other than the scriptures.

But there seem to be some amazing messages

that most members forget…

What does Silver Fox say?

Since the beginning of time, our Heavenly Father has spoken with great clarity on this subject: from the gentle plea, “If thou lovest me … thou wilt remember the poor, and consecrate of thy properties for their support”; to the direct command, “Remember in all things the poor and the needy, the sick and the afflicted, for he that doeth not these things, the same is not my disciple”; to the forceful warning, “If any man shall take of the abundance which I have made, and impart not his portion, according to the law of my gospel, unto the poor and the needy, he shall, with the wicked, lift up his eyes in hell, being in torment.”

But while the Atonement is meant to help us all become more like Christ, it is not meant to make us all the same. Sometimes we confuse differences in personality with sin. We can even make the mistake of thinking that because someone is different from us, it must mean they are not pleasing to God. This line of thinking leads some to believe that the Church wants to create every member from a single mold—that each one should look, feel, think, and behave like every other. This would contradict the genius of God, who created every man different from his brother, every son different from his father. Even identical twins are not identical in their personalities and spiritual identities. It also contradicts the intent and purpose of the Church of Jesus Christ, which acknowledges and protects the moral agency—with all its far-reaching consequences—of each and every one of God’s children. As disciples of Jesus Christ, we are united in our testimony of the restored gospel and our commitment to keep God’s commandments. But we are diverse in our cultural, social, and political preferences.

We have all seen a toddler learn to walk. He takes a small step and totters. He falls. Do we scold such an attempt? Of course not… [C]ompared to the perfection of God, we mortals are scarcely more than awkward, faltering toddlers. But our loving Heavenly Father wants us to become more like Him… I do not believe in a God who would set up rules and commandments only to wait for us to fail so He could punish us. I believe in a Heavenly Father who is loving and caring and who rejoices in our every effort to stand tall and walk toward Him. Even when we stumble, He urges us not to be discouraged—never to give up or flee our allotted field of service—but to take courage, find our faith, and keep trying.

President Uchtdorf,
with his big green eyes
and stories of aviation,
brings joy to members
of every nation.

His hair is silver,
so beautiful,
like an angel in disguise.
He knows how to reach
to the lost one,
while the 99 he’ll hypnoti-i-i-ize

with his big green eye-i-i-i-ize

I can quote scripture, I can try to expound doctrine, and I will even quote a bumper sticker I recently saw. It was attached to the back of a car whose driver appeared to be a little rough around the edges, but the words on the sticker taught an insightful lesson. It read, “Don’t judge me because I sin differently than you.”

Sometimes we assume it is because they have been offended or lazy or sinful. Actually, it is not that simple. In fact, there is not just one reason that applies to the variety of situations. Some of our dear members struggle for years with the question whether they should separate themselves from the Church. In this Church that honors personal agency so strongly, that was restored by a young man who asked questions and sought answers, we respect those who honestly search for truth. It may break our hearts when their journey takes them away from the Church we love and the truth we have found, but we honor their right to worship Almighty God according to the dictates of their own conscience, just as we claim that privilege for ourselves.

We know that sometimes it can be difficult to keep our heads above water. In fact, in our world of change, challenges, and checklists, sometimes it can seem nearly impossible to avoid feeling overwhelmed by emotions of suffering and sorrow. I am not suggesting that we can simply flip a switch and stop the negative feelings that distress us. This isn’t a pep talk or an attempt to encourage those sinking in quicksand to imagine instead they are relaxing on a beach. I recognize that in all of our lives there are real concerns. I know there are hearts here today that harbor deep sorrows. Others wrestle with fears that trouble the soul. For some, loneliness is their secret trial. These things are not insignificant.

Unfortunately, we sometimes don’t seek revelation or answers from the scriptures or the handbooks because we think we know the answers already. Brothers and sisters, as good as our previous experience may be, if we stop asking questions, stop thinking, stop pondering, we can thwart the revelations of the Spirit. Remember, it was the questions young Joseph asked that opened the door for the restoration of all things. We can block the growth and knowledge our Heavenly Father intends for us. How often has the Holy Spirit tried to tell us something we needed to know but couldn’t get past the massive iron gate of what we thought we already knew?

The secret of the fox
Ancient mystery
Somewhere deep in SLC
I know youre hiding
Will we as members hear these truths?
Will we ever know?
or will they always be a mystery
What do you say?

Hiding in the COB.