What’s All This Hullabalooky With The Womenz? 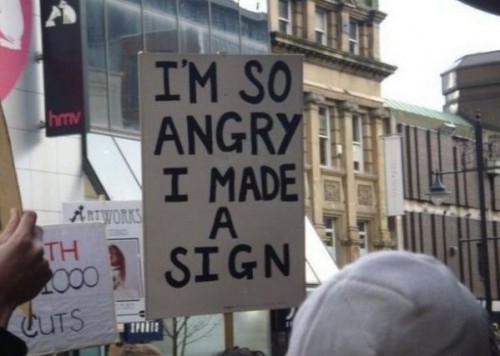 OK, so I had a different post planned today.  It was super-duper smart and stuff.  But I’ve been struggling with a chronic illness all week that makes my brain fuzzy, my thoughts loopy, and I can’t think much very well clearly.  But then a great thing happened-the Church’s PR department released a statement on the Ordain Women movement, and everyone everywhere got really mad, so now I have something to write about and a great click-bait header.  At least it sounds great in my mind-fuzz state.  Now I will proceed to follow the Church’s PR example, and start a $%*^-storm of controversy.

Ha!  Just kidding!  I think a lot of the core issues have been and are being discussed.  I will just write a few of my reactions to the maelstrom of online comments.  To be fair, I should state that I am not really on-board with Ordain Women’s specific cause. I do want greatly expanded roles for women’s leadership, and for women’s spiritual power to be more explored and utilized.  For now I’ll just have to supplement with Church history and some occasional paganism. However, I am VERY passionate about people asking sincere and important questions and fostering dialogue. So in that sense, I do support the OW movement, even if I don’t share their goal.  Now with that disclaimer out of the way, here are some of my most puzzling questions I have for people who are really mad at Ordain Women.

1. What is your definition of a protest? 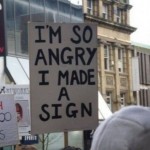 Is standing quietly in a line and singing hymns a protest?  Because if it is, I have participated in SO MANY protests at the MTC.  Man, we were just a hot-bed of social activism, waiting in lines, singing hymns, and not entering a building if we were asked to leave.  Luckily our radical ways didn’t affect our worthiness, or there would have been a whole generation of missionaries who couldn’t serve. If that’s not your definition of a protest, then maybe holding up signs and shouting offensive things at Mormons on their way to worship the God they love is closer to what you had in mind.  I know I would hate to be in the middle of that.  Ironically the Church PR department seems fine “inviting” its own members to be in the middle of it; because apparently standing quietly in a line they weren’t invited to stand in is just as radical and offensive as mocking temple garments.

2. If the Church is really run by God, why are you so threatened by these different opinions?
It’s God’s church. Let them ask. If they’re dead-wrong, they will fade away. If you really believe that nothing can destroy it because it’s God’s church, then these women shouldn’t even be on your radar.  But if they are , and you’re really upset about them, that signals that you DO find them threatening.  So my guess is either you don’t really believe God can protect his church from some “wild” opinions, or they are triggering some fear or anger that is hard to look at or acknowledge. It’s OK, we all have people that do that to us.  Just try and figure out why.  Do you feel like they threaten your own testimony?  Are you afraid of change?  Are you afraid that they will influence people you love to share their opinions?  Hey, it’s OK if you do.  I’ve had these same reactions to different people in the church.  Usually that’s a great opportunity for me to really talk with God about my own reactions so He can help me figure out what’s going on with me and what to do about it.  Try it.  The bonus is, it usually calms your anger towards those who were previously driving you crazy.

3. Why are you telling people in Ordain Women to leave the church?
I know not everyone who strongly disagrees with OW is saying this awful thing.  However, this is the worst offender of all the comments in my book, and I have very strong feelings about it that I will detail:

Your difference is beautiful…just don’t remind the roses, or they’ll kick you out of the vase

One-If you believe the church is the one true way back to God, you are essentially telling people to leave God’s presence and never know their Heavenly Father because you disagree with their interpretation of the Gospel.  If you don’t really believe the Church is the one way back to God, this is a little more forgivable as you’re just saying “Hey, find a better path that suits you.”  But if you feel that strongly about it as a member, you probably need to make sure you are going out with the missionaries and letting every single investigator know that a new requirement to be baptized is that you don’t agree with the Ordain Women movement. In fact, just make a laundry list of reasons people shouldn’t join the church to hand out to the missionaries so we don’t run into this problem ever again, because everyone will be vetted before baptism, so as not to have “apostate” feelings or opinions pop up later.
Two-If these women and men do leave the church, what are you supposed to do when you get that conference talk about reaching out to less-active members and encouraging them to come back to church?  You wanted them gone, but now you’re supposed to reach out to them, asked by the very apostles and prophets you thought you were defending earlier.  Maybe if we stopped telling people to leave the church, we wouldn’t have quite so many less-actives on our ward rosters which, at the very least, would save the missionaries some work so they could actually be teaching new people the Gospel instead of re-finding the ones we’ve cast aside.
Three-How on earth does this fulfill any of the Church’s missions?  This doesn’t proclaim the Gospel, redeem the dead, perfect the Saints or serve the poor.  In fact you are actively hindering every one of those missions by telling people to leave.  You’re telling them to not hear the Gospel, to not redeem their dead in the temple, and to not perfect themselves through covenants and worship.  I suppose they can still serve the poor, so free pass on that, but if you haven’t noticed, we’re a small church compared to the world, and our job is huge.  It’s not like we have talent to squander.  In fact, I think it was God who said something about the worth of souls being great.  So…let’s not get rid of something we know God thinks is great, hmmm?
Four-It’s not your Church. An argument I’ve frequently read against OW is, “This is the Lord’s Church, He will run it as He sees fit.”  If you’re going to condemn OW by that, it’s a double-edged sword. Did he tell you to kick out His children and make them want to leave?  I seem to remember something about “feed my lambs” not “throw out the sheep you think are smelly.” We don’t get to decide who is worthy.  I honestly think encouraging people to leave the Church is a much worse sin than repeatedly asking the brethren a question in a way that makes others uncomfortable.
Five-It’s what Satan would do.  Seriously, if you’re a believing Mormon and someone says “I got a message from someone telling me to leave the Church”, are you going to tell your friend that message was inspired by God or by an adversarial spirit?   Does this suddenly change if the person is a member of Ordain Woman?  Or gay?  Or ultra-conservative? Or hard to get along with?  I don’t believe it does.

OK, in conclusion,  I just want to say that I both love and disagree with a LOT of people in the church, but they are my brothers and sisters. Those differences add to my own understanding when I allow them to. Being kind can be more important than being “right.”  We’re family.  We have to work through these tough things together with an understanding that our disagreements are not more important than our love for each other.  We can still disagree and might even be frequently annoyed with each other, but healthy families learn to deal when they disagree; not throw each other out on the street. 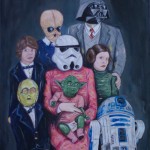 If they can make it work, anyone can.