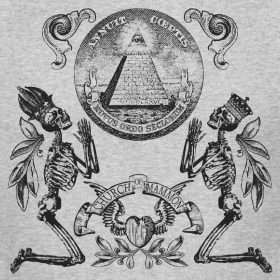 You may not have heard it called by that name because it’s not “Politically Correct.” There seems to be a war on Mammon day here in America. It’s been under attack more and more over the years. It used to be that God stayed in his territory and money stayed in Mammon’s. Remember when Jesus said to give money to Caesar because it wasn’t God’s? He’d have a harder time making that argument today since Mammon is coming more under attack and co-mingled with God. The attacks first began in the 1860’s, when coins for the first time in the nation’s almost 100 year history had the word God engraved on them. This was done to make it apparent that God was on the Union’s side. Paper currency wasn’t under attack until the 1950’s, when the same phrase “In God We Trust” was first printed on it. Money, by definition is Mammon. The US just wanted to draw more distinctions between it and the atheist USSR. But that is a flimsy excuse as the US embraced Mammon via capitalism. I don’t care who wants to deny it, there is a War on Mammon.

However, the battle seems to finally swinging in Mammon’s favor. Soon, Thanksgiving will no longer steal the spotlight from Mammon, as it is rapidly becoming Mammon Eve, or the day before Black Friday (Mammon Day). So please keep the spirit of the season: get more stuff. Increase your possessions. That’s what it’s all about.

Nibley points out what I’m talking about:

Then an all–important principle; you cannot have it both ways, you cannot work for both employers, you cannot lay up treasures both on earth and in heaven–you cannot divide your heart between them; for to one master or the other you must give your whole and undivided devotion–both employers demand that, but only one of them can have it (Matthew 6:19–20). You must go one way or the other, there can be no compromise (Matthew 6:22–23). “No man can serve two masters”: love and hate cannot be divided up between them, “ye cannot serve God and Mammon,” mammon being to this day the regular Hebrew word for business, particularly money and banking (Matthew 6:24).

Nibley also shows that Brigham also knows about this war between God and Mammon:

“You may say,” says Brigham, “‘If we live, we must eat, drink, and wear clothing’; and ‘He that provideth not for his own household, has denied the faith, and is worse than an infidel’; [by ‘providing’ the same writer means ‘food and raiment… and therewith content’] numberless arguments of this kind will present themselves to the minds of the people, to call them away from the line of their duty.” It is Satan’s clever decoy to that fervid consumerism which is a confession of mental, moral, and spiritual bankruptcy.

Here’s even more Nibley, about how horrible it is that God is encroaching upon Mammon, or maybe vice versa:

Today the beautiful word Zion, with all its emotional and historical associations, is used as the name ‘Christian’ was formerly used, to put the stamp of sanctity on whatever men chose to do. The Hebrew word for financial activity of any kind is mamonut, and the financier is a mamonai; that is, financing is, quite frankly, in that honest language, the business of Mammon. From the very first there were Latter-day Saints who thought to promote the cause of Zion by using the methods of Babylon. Indeed, once the Saints were told to make friends with the Mammon of unrighteousness (D&C 82:22), but that was only to save their lives in an emergency. We have the word of the Prophet Joseph that Zion is not to be built up by using the methods of Babylon. He says, “Here are those who begin to spread out buying up all the land they are able to do, to the exclusion of the poorer ones who are not so much blessed with this worlds goods, thinking to ley foundations for themselves only, looking to their own individual familys and those who are to follow them. . . . Now I want to tell you that Zion cannot be built up in eny such way [sic].”

What do we find today? Zion’s Investment, Zion Used Cars, Zion Construction, Zion Development, Zion Bank, Zion Leasing, Zion Insurance, Zion Securities, Zion Trust, and so on. The institutions of Mammon are made respectable by the beautiful name of Zion. Zion and Babylon both have their appeal, but the voice of latter-day revelation makes one thing perfectly clear as it tells us over and over again that we cannot have them both.

So please, on this Mammon Day, remember the spirit of the season, perhaps best articulated by the Prophetess of Mammon, Ayn Rand:

Merry Mammon Day! May the deals be ever in your favor! (Unless the deal is with me; then screw you)