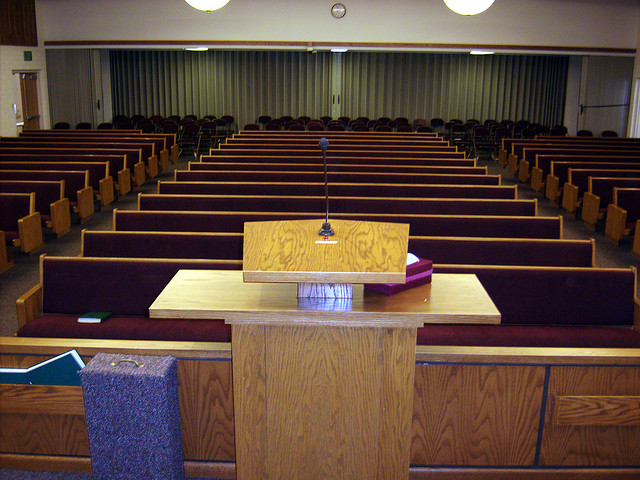 I gave this talk in my ward last Sunday. A woman gave a talk after me in which she shared her difficulties accepting all the things church leaders teach. My bishop stood and gave comments afterwards mentioning one of his friends who is a good member and who has never felt the spirit. He added that we’re all different and should respect the differences of others and learn from them.

We’ve just heard a great talk about what trust in God is, and I’d like to continue to unfold the meanings of it. While it’s a bit cliche, I’d like to start by looking at the definition of the word trust, specifically as it is used in the new testament. In the KJV there are two different words in Greek which are translated as ‘trust.’ πεποιθηση (pepoíthisi) translated today as conviction or reliance and ελπίζω (elípzo) meaning hope. So, in the new testament, to trust was to have hope in. Trust in God is the verb form of the word faith and/or hope in God. To trust is to act with faith.

Etymologically the English word Belief used to mean “trust in God,” coming from the old English and Germanic root of love, glaube, liebe. Belief was a love, or something/someone held dear, or trusted. So how did belief, meaning trust in and love of God arrive at its modern definition? In the 16th Century the word belief became limited to “mental acceptance of something as true,” largely as a backlash against the enlightenment. This rich word indicating love and trust had been diminished to a word meaning mental acceptance as true without physical evidence, and this change occurred simply because things like the centrality of earth in the cosmos and the nature of creation were being questioned.

I prefer this broader, richer definition of belief. I love and hold dear our gospel and our ordinances. I am faithful to my covenants and religion. However, I have a hard time with the narrower definitions of those words. I am one who struggles with the literalness of our beliefs. It has been my experience that I am not alone in this, that there are many others who don’t seem to really have a testimony in the traditional sense. For a long time I struggled with this. I felt like I didn’t belong. Now, for those of you who can relate to this, or if anyone feels for any reason that you don’t belong or fit in, I would say, stay because we need you much more than I think we can comprehend

In three locations in our standard works, we read about spiritual gifts. Paul, Moroni, and Joseph Smith each describe them. These gifts often come in pairs (gift of tongues & interpretation of tongues; knowledge & wisdom; to heal & to be healed). If we read the first two gifts which Joseph listed, we find that the first one is the gift of a testimony of Jesus through the holy ghost. The second is the gift to believe on others and continue faithful. It’s important that we recognize this second spiritual gift, it is a gift, not a deficit. Additionally, faith itself is a gift listed by all three authors. They all also say that we don’t all have the same gifts.

At some point in my struggles of feeling that I didn’t belong, I realized that I was so distraught simply because I did not have the gift of faith at that time. A peace came as I realized that explicitly in the scriptures when they mention the gift of faith they say that not everyone has all the gifts. I also realized that all three locations explicitly say that charity is the greatest gift, greater even than faith. I then felt more than ever the drive to find ways to lift those who suffer, mourn with those who mourn, and to do what little I can to improve things.

The prophetess Chieko Okazaki said “Let us trust the Lord, trust ourselves, and trust each other that we are trying to do the best we can. We need all the strength we can find for our daily trials… Let [us] be supportive and sharing. We are all in the [same] boat, and it needs all of us to paddle just as hard as we can. Let us value everyone’s contributions. Let us not exclude a sister, whatever her life choices and whatever her circumstances.”
– Chieko N. Okazaki, First Counselor in the Relief Society General Presidency, General Relief Society Meeting 1994

As Paul taught that not all have the same gift, he gave a great explanation of why that is the case as he describes the body of Christ. Each of our gifts, our time and talents, are different and that is actually the whole point of spiritual gifts. Just as different parts of the body have different functions, we as members of the body of Christ also contribute differently to the work of bringing about a world of charity, or in other words, Zion.

My very insightful wife said something about trust, specifically trust in God, which struck me as being very important to note. Trust, rather than some abstract belief is about relationships. Trust, like relationships, grows over time as each party tries to cultivate it. Trust in God is not an item on our checklist for celestial glory, it is a process, a relationship, which we must continuously develop. So how might we grow our trust in God? Perhaps we can gain some insights by considering how we show and grow our love of God.

In the new testament, there is only one commandment from Jesus which he claims as his commandment: love one another. King Benjamin in the Book of Mormon taught that we serve God by serving our fellow humans, especially those in need. To love God is to love our neighbor, or as it says in the epistle of John, God is love.

Anciently people believed that we gain the properties and characteristics of what we eat. Today, we all symbolically ate the body and blood of Jesus. Hopefully we can see Jesus when we interact with and serve each other. Then we’ll know, as Jesus said, that the service we did unto others was service we did unto God.

Maybe the same applies to trust. Maybe the way we grow our love of God by loving others, is the same way we grow our trust. We must develop friendships with others and build relationships of trust. Joseph Smith said that THE grand fundamental principle of mormonism was friendship, and that it would revolutionize the world. Perhaps building trust in each other is a way to trust in God.

Let us as Mormons, revolutionize the world with the grand fundamental principle of our religion. Let’s reach out with friendship. Let’s build relationships of trust with our fellow beings. This is the way to build Zion. Let’s trust in God that this endeavor is possible, and work to make it so. In this way we can actualize our trust in God.

I say these things in the name of Jesus Christ, amen.