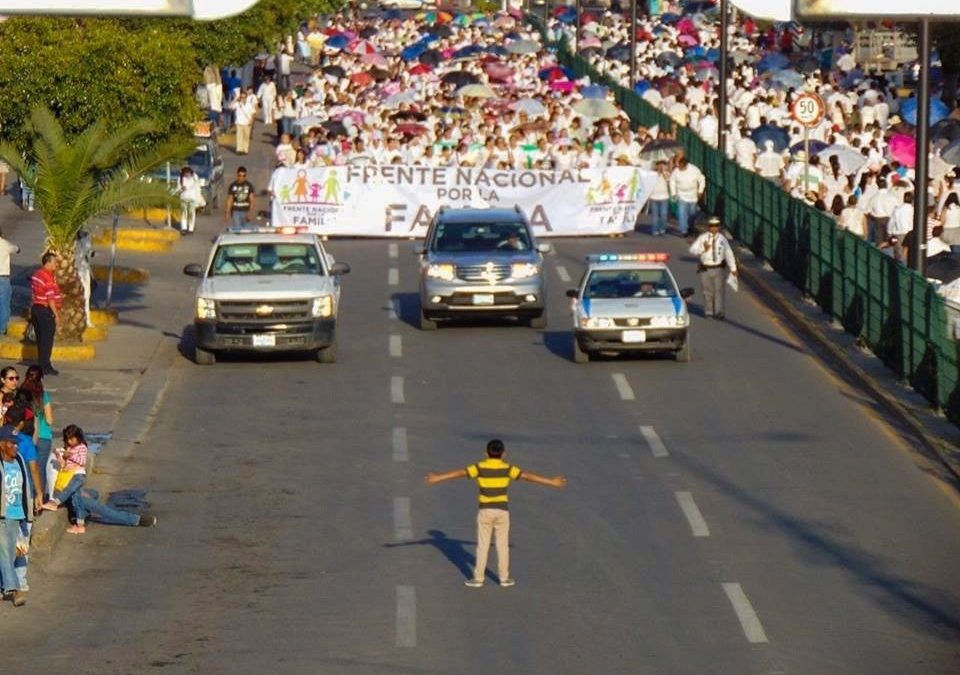 The above picture was taken this past weekend in Mexico- in one of the 100 marches that took place across the country to defend “traditional families.” This (approximately) 12-year-old boy went and stood there against an entire cavalcade and personification of this Prop 8 version 2.0.

When the photographer asked him why he did that the boy replied “My uncle is gay, and I love him. I don’t like hate” right before his mother took him away because presumably, children standing in the middle of the street is dangerous, but standing in the middle of the street when it is full of homophobes is worse. Y’all. I can’t with this. I can’t.

So, in lieu of an actual article, here is a list of points because 3 years of this in the States and the slow simmer that has now come to a boil of the last 7 years here in Mexico is enough for me to sacrifice coherence a little. Things to note:

TL;DR: Control your people Americans, someone teach Elder Oaks how to use Wikipedia, give us a heads up about the garbage you are about to “bless” us with, I am taking a church sabbatical (thanks Jana Riess!), are we banning children with LGBTQIA uncles, aunts and cousins?, why don’t we talk about Jesus at church, The Church recycles arguments, we still practice polygamy, wtf does natural mean, the church gives 0 craps about things that really affect Mexicans, the church is Taylor Swift [insert snake emoji here] to the Catholic church’s Kim Kardashian .

I have eaten way too many quesadillas these last two days and cried a bunch. And then I remember there are 12-year-old boys who stand against entire mobs in defense of their gay uncles, and I know that in the end, love really does win.