Tis So Sweet to Drink My Coffee 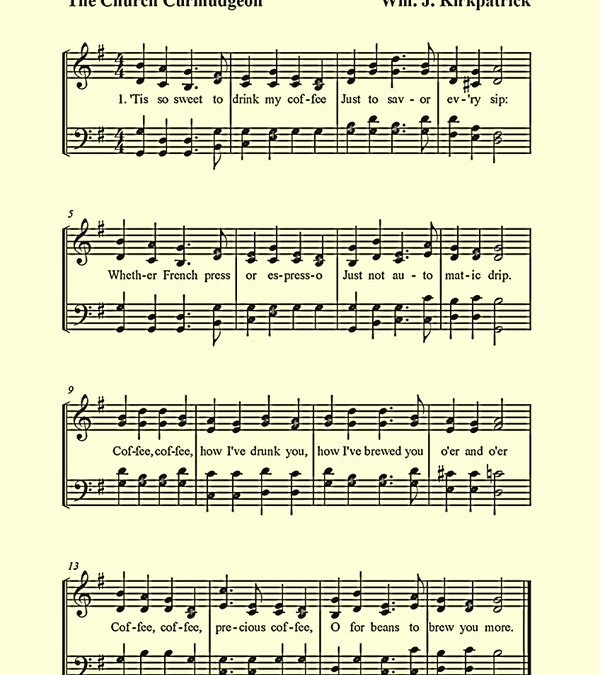 I have a confession to make….

I’m a Mormon convert and I drink coffee. Lots of it. I guess that makes me the worst sinner on the face of the planet because I don’t keep “the commandments” – or rather one of the commandments.

Other than that I’m a pretty good person. Seriously. I don’t drink or smoke, and I’m faithful to my spouse.

It all started when I was about five years old. My grandmother poured some of her coffee into a saucer so it would cool down and gave it to me. I’ll admit, at that age, I didn’t really like the taste of it too much. I just knew this was something all the adults around me drank, and I figured at some point I would learn to like it. However, as a Baptist I knew from an early age that alcohol, drugs and cigarettes were off limits, and I was fine with that.

I didn’t really drink it all throughout my childhood and teenage years, but it was there if I wanted it. All I had to do was ask. But why would I? Again, this was something the adults around me drank to get them through the day.

My “addiction” to coffee began when my youth pastor took a group of us youth to a nearby coffee shop one night after church. This was in the mid-to-late 90’s, when coffee shops were just becoming trendy. I ordered a plain cup of coffee. As the naturally intellectual type, I loved the atmosphere and felt at home there with the dim lighting, comfy couches and soft music playing in the background. Little did I know, I was about to enter my college years at just about the right time as coffee shops were increasing in popularity. And as a philosophy major, it worked out perfectly! How else do you think I was going to get through those late nights studying and writing papers? And it would seem I would need it even more through my first round of grad school. I could not have gotten through any of those years without my cup of Joe. (and I don’t mean Joseph Smith!)

So imagine my shock when the missionaries told me I had to give up coffee in order to be baptized. And I had to give it up that day! No more. Ever again. Not another drop. I tried my best to convince myself it was time to give up my adolescent ways, since my college days were over.

I honestly tried to give it up “cold turkey” for two months. However, I eventually decided the additional migraine headaches (which I suffer from anyway) were just not worth it. Also the tiredness and irritability that came with it took a toll on me. And now that I am back in grad school, I rely on it all the more to get me through my heavy readings and 40-page term papers. Somehow I’ve managed to keep it from my Bishop, even though some outside the LDS Church know I drink it. (I do not hold a Temple Recommend, by the way, so no worries there.)

So I’ll be honest. What really didn’t make sense to me was how could these eighteen or nineteen year old missionaries, who had never had a cup of coffee a day in their lives, sit there and tell me I had to give up coffee? Just like that? It would be comparable to me as a Baptist telling an alcoholic that he would have to give up alcohol in order to join the Baptist church. It isn’t quite that easy.

But on that same token, I wonder how many church members struggle with this- and other sins- from behind closed doors and don’t say a word to anyone in the Church about it.

Every time I hear the words, “Keep the commandments” at church, I die a little more inside. As if the whole of the teachings of the Law and the Prophets is summed up in “Thou shalt not drink coffee.” (Jesus did say that, right? And it’s stated clearly in the Ten Commandments.)  And the more I think about giving it up, the more I want another sip.

I can’t help but wonder if this is God’s way of judging me for being so judgmental of those young people around me who experimented with alcohol (and other stuff) when we were teenagers. Matthew 7:2 says, “For in the same way you judge others, you will be judged, and with the measure you use, it will be measured to you.” I will admit, in all my attempts to be the “good little Baptist girl,” I could be highly judgmental of others; just as I know I would be judged severely by my Ward if they knew my little secret.

But as I understand the Word of Wisdom as stated in Doctrine and Covenants 89:9, it simply reiterates the following, “And again, hot drinks are not for the body or belly.” So what about hot chocolate or herbal tea? Apparently that’s okay? They have served both in Relief Society on occasion. So why not coffee too?

And as I understand it, the commandment to not drink coffee only followed because of later attempts to “correlate” the Church, as to distinguish us from other denominations.

And the sheer thought that breaking “the commandments” drives the Spirit away is absurd to me, considering I do receive promptings regularly and have had very strong spiritual experiences in the past.

I feel bad for those who do commit “real” sins. Like dancing! (a big no-no in the Baptist church!)

So excuse me while I check myself into the local Emma Smith Rehab Clinic.

Oh, and by the way, I really enjoyed the last church dance I attended. But, I don’t think my old Pastor would approve.

FYI: The above picture is an adaptation of an old Baptist hymn “Tis So Sweet to Trust in Jesus.”

Cup o'JoSmith majored in philosophy in college, and holds a Masters in Existentialist Literature from Bogus University. She travels the country lecturing, in between caffeine addiction-related rehab stints. She frequents coffee shops like they are bars, and always looks forward to the next caffeine rush! She realizes if she doesn't soon repent and change her ways, she may be on her way to Spooky Mormon Hell, but at least they serve coffee there- or so she's been told! (This is not really her picture, but more a depiction of her current existentialist dilemma.)

All posts by Cup o'JoSmith