Thoughts on Sam Young, Excommunication, and Responding to Internal Dissent 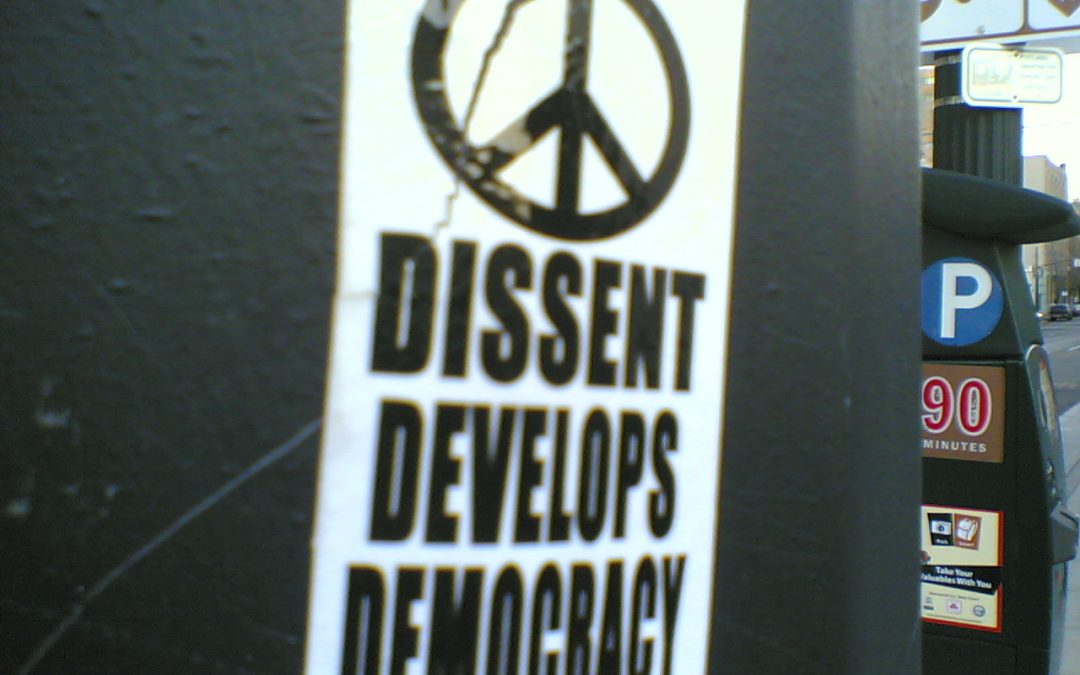 This past week Sam Young announced that he had been excommunicated from the Church of Jesus Christ of Latter-day Saints for his aggressive advocacy to change the youth interview process. In Sam Young’s excommunication letter, he was informed by his Stake Presidency that:

The issue is not that you have concerns–or even that you disagree with the Church’s guidelines, rather it is your persistent, aggressive effort to persuade others to your point of view by repeatedly and deliberately attacking and publicly opposing the Church and its leaders. You are entitled to your opinion or position, but you cannot remain a member in good standing while attacking the Church and its leaders and trying to get others to follow you.

Over at By Common Consent, Steve Evans shared his reactions to this line of reasoning:

In my opinion, what we fear in this church is not necessarily truth-telling, or change, or even public expressions or protests. What we fear is ceding control and authority, destabilizing our structure. This organization depends on a few cultural elements for its ongoing survival, and hierarchy is part of that culture. Sam Young was able, quite safely, to decry the practice of bishops’ interviews. What was the line he crossed that brought him into church discipline and excommunication? Quite simply, it was his refusal to stop when his local leaders asked him to stop. It has little to do with his activities and everything to do with his disregard (perceived or real) for the order of the church. …

This is the cardinal sin within Mormonism, for activists: failing to recognize the authority of leaders. You can say whatever you want, act as you please. But when your leaders call you to heel, you best step in line. This is because our church depends on this authority from top to bottom. It is infused in our culture and our discourse. Presiding authority is commemorated in our church programs. Authority and “keys” are invoked in almost every meeting, every week. Even the act Young decried, bishops’ interviews, are an exercise in authority. So, Young’s refusal to comply with leadership goes right to the heart of the contemporary church. The public spectacle engineered around his discipline is only further evidence of the central offense. Young demonstrated that his movement was more important to him than perceived loyalty to the institution.

In recent years, the driving factor that distinguishes excommunicants from those of us who merely voice our disagreements seems to be whether we have started a movement around our ideas. Sam Young, for example, founded the website Protect LDS Children, organized a hunger strike for three weeks, and called news conferences to publicize his position.

If there’s a change between the LDS excommunications of a quarter century ago and the ones we’ve seen more recently, it’s that the people singled out now have all started organizations and active protests, rather than simply writing about controversial or inconvenient facts of history, like D. Michael Quinn did in 1993.

Last fall I attended a political science conference where Dr. Gary King shared his research about how the Chinese Communist Party exercises control over the social media activity of its citizens. When people share posts that are critical of the regime in power, they often find that their posts are deleted by government censors:

We found that the government does not engage on controversial issues (they do not censor criticism or fabricate posts that argue with those who disagree with the government), but they respond on an emergency basis to stop collective action (with censorship, fabricating posts with giant bursts of cheerleading-type distractions, responding to citizen grievances, etc.). They don’t care what you think of them or say about them; they only care what you can do. [LINK]

I can’t help but be struck by the parallels. When we in Western liberal democracies see political governments treating outspoken critics the same way that the LDS Church treats its outspoken critics, we call it “authoritarianism” and we don’t usually applaud it. Indeed, we often condemn these governments for violating human rights. We don’t (until recently) hold them up as model citizens of the world community.

To be sure, private religious institutions are not liberal democratic governments and are in no way obligated or expected to provide their members the same freedom of speech, expression, and assembly as liberal democratic governments. In free liberal democracies, private organizations are free to structure themselves undemocratically if they like. One of the blessings of the Enlightenment and secularism, however, is that religious organizations are no longer empowered to deprive someone of life, liberty, or property on account of their opinions or public speech. Usually, the most they can formally do is kick them out.

And yet… it still makes me uncomfortable that the modern LDS method of dealing with internal dissent has such strong parallels with global authoritarian regimes. At the very least, I would think that this should give us pause and prompt some deep self-reflection. Do we really want the Chinese Communist Party and the North Korean regime to be our neighbors in organizational behavior when it comes to dealing with internal rabble-rousers and critics? When it happens in China and North Korea, we in liberal democracies say it’s because its leaders fear losing control and so they respond by cracking down on dissent among its citizens. How likely is it that LDS policies on dealing with public dissidents is not similarly motivated to some extent by fear and anxiety of losing control, given that imperfect humans are at the helm and basic human social psychology is at work in all humans and human organizations? Do we ordinarily consider fear and anxiety to be praiseworthy motivations for decision-making? Does that represent our best selves?

This is all the more troubling when one considers the doctrinal implications of excommunication in the LDS Church. For orthodox Latter-day Saints, excommunication literally means eternal banishment from the presence of God, one’s eternal companion, and forever family, if one does not repent and submit to the institutional hierarchy. Is that really the type of God we believe in? One who would forever banish from Their presence someone who is sincerely, yet imperfectly, advocating for justice and progress in communities that they deeply care about? Is that really the type of God that we want to believe in?

As the largest institutional expression of the Joseph Smith Restorationist tradition in the world, I want the Church of Jesus Christ of Latter-day Saints to be the very best version of itself that it can be. I want it to embrace and model the expansive vision of truth and the cosmos that Joseph Smith so compellingly articulated to his followers. This is a theology that embraces “further light and knowledge” and “continuing revelation” and preaches that “we believe that we have a right to embrace all, and every item of truth, without limitation or without being circumscribed or prohibited by the creeds or superstitious notions of men, or by the dominations of one another, when that truth is clearly demonstrated to our minds, and we have the highest degree of evidence of the same” [emphasis added]. This theology can handle a bit of well-meaning disagreement among its members. It can handle sincere attempts by those who are doing the best they can with the light and knowledge they have to advocate for positive change (as they see it) in the Church.

Can we not have more of a space in our religious communities for those who do likewise?