The Symbol of the Cross 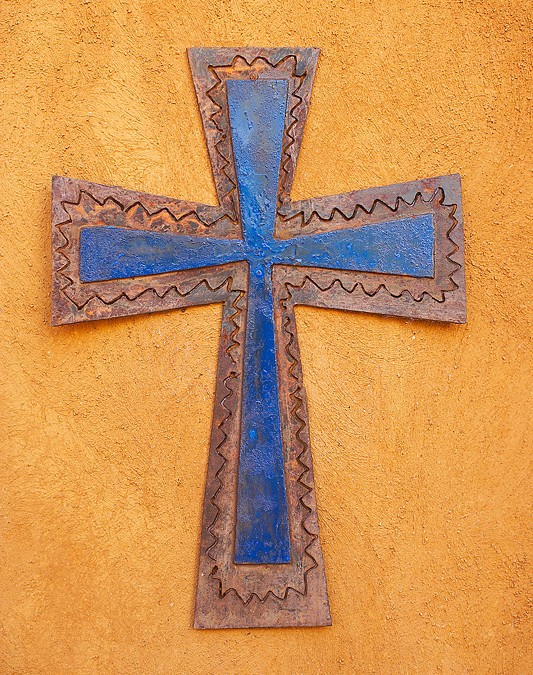 At the time of year when the symbol of the cross is front-and-center in most Christian worship, Mormon attitudes toward the cross seem to still lean toward either indifference (“meh”) or abhorrence (“The mark of the Beast!”). Between those extremes—or apart from them—maybe there’s enough space for us to catch a glimpse of the cross as a meaningful symbol of Jesus. Five possibilities:

1. The cross might remind us of the two Great Commandments.

2. The cross might remind us that Jesus was crucified.

Jesus didn’t just die; he was killed. And he wasn’t just killed; he was crucified—literally “cross-ified,” a deliberately gruesome, painful, and public form of execution typically reserved for those considered to be threats to the peace of the Roman Empire. That is to say, Jesus wasn’t nailed to a cross because he healed sick people, fed crowds, and taught about personal salvation. Those sorts of things would surely not have drawn much attention from the powers that be, much less their deadly wrath. He was crucified because he announced, taught, and demonstrated a way of life, the Kingdom of God, that challenged the legitimacy of the current system of exploitation and corruption. And in the end, when he submitted himself to the blatant injustice of the cross, Jesus exposed the fundamental immorality of violence and those who use it.

3. The cross might remind us we must die to our old selves.

Baptism is a nice, memorable, symbolic enactment of death and rebirth. But the ultimate enactment is the crucifixion and resurrection of Jesus. The cross provides a visual, and sometimes uncomfortable, reminder that we are called to follow him by dying to our old selves, our egos, our “natural man.” And its visual presence might remind us that the challenge will probably be ongoing, not a one-time event.

The cross was the instrument of Jesus’s death, but scriptures also use the image to remind us we are better for having “endured the crosses of the world” (2 Nephi 9:18), and that “taking up OUR cross,” whatever that means for each of us individually, is an essential part of following Jesus (D&C 36:2).

Mormons don’t have an aversion to using and displaying religious symbols, from putting trumpet-blowing angels on our temples to hanging pictures of temples on our walls to wearing CTR rings and Young Women medallions to attaching our old missionary name tags on our scripture covers. All of those can be symbols that eventually point to Jesus, but none of them do it as directly and simply as the image of the cross.

Paul said his role was to testify of “Jesus Christ, and him crucified,” perhaps suggesting that the person and the event are inseparable. If so, the symbol of the cross might be worth reconsidering, especially during this season.

Jim is a sociologist by trade. He and Merrie live in colorful Salt Lake City, trying to be Green, vote Blue, and cheer Red.

All posts by Jim Smithson