The Pope and the Mormon Hierarchy 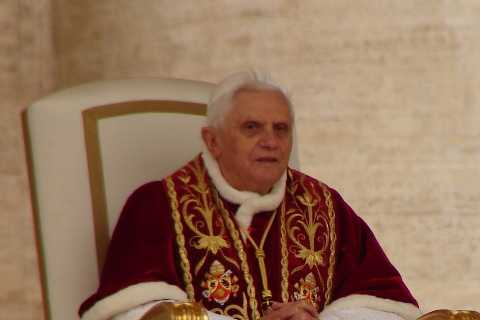 After having repeatedly examined my conscience before God, I have come to the certainty that my strengths due to an advanced age are no longer suited to an adequate exercise of the office of President of the Church. I am well aware that this calling, due to its essential spiritual nature, must be carried out not only by words and deeds but no less with prayer and suffering. However, in today’s world, subject to so many rapid changes and shaken by questions of deep relevance for the life of faith, in order to govern the Church of Jesus Christ of Latter-day Saints and proclaim the Gospel, both strength of mind and body are necessary — strengths which in the last few months, has deteriorated in me to the extent that I have had to recognize my incapacity to adequately fulfill the ministry entrusted to me.

Well, that was actually a statement from the Pope (with some proper noun changes). The Pope acknowledged the effects of old age and that at some point it becomes nearly impossible to continue to lead. This hasn’t occurred in Catholicism in 600 years. This move makes sense and I hope that Pope Benedict can get the rest he needs in the sunset of his life. 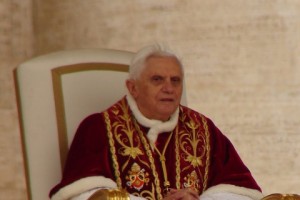 It’s no secret that when it comes to hierarchy and authority, the Mormon church has much in common with the Catholic church. I’m sure many of you heard lessons about priesthood authority saying that either the Catholic church is right or the Mormon church is right, or other such ‘ties’ between them. Pope Benedict’s explanation makes sense and it leads one to ask, why don’t our leaders do this?

The answer is ultimately elusive, but there are some interesting moments in Mormon history that are in this vein. Some might say there is no precedent for it, which is mostly true. However, on July 16 1843 William Clayton wrote in his journal that Joseph Smith said “Hyrum held the office of prophet to the church by birth-right & he [Hyrum] was going to have a reformation and the saints must regard Hyrum for he had authority.” On the same date Willard Richards wrote in his diary “Joseph Pr[eached]–all day–constituted Hyrum prophet.” However, church members starting freaking out at the idea of Joseph no longer being the Prophet. This could be seen as the intention to go emeritus by Joseph and be a precedent for starting it today. 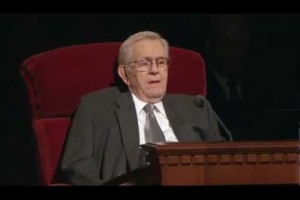 Before 1978, all General Authorities served until they died. In 1968 Hugh B. Brown was the one to propose that ALL general authorities become emeritus at a certain age, and had it been accepted he would have been one of the first to go emeritus. (see An Abundant Life: The Memoirs of Hugh B. Brown) President Brown served with President McKay in the last years of his life. President McKay was only fully present mentally during sporadic times during the last years of his life, which was part of the reason that he had 5 counselors in the First Presidency. I would guess that working so closely with President McKay during those years had some influence on his proposal. As alluded to previously, this idea was implemented ten years later, but did not include the First Presidency or Quorum of the 12. In 1979 the church Patriarch, Eldred Smith, went emeritus and that position in the Church (which Joseph F. Smith placed in higher authority than the Quorum of the 12) has remained vacant ever since.

In 1899, the book The Articles of Faith stated:

This was the church policy, at least on paper, until May 1989 . Quinn discussed what happened then…

counselors [Hinckley and Monson] felt it necessary to execute legal documents giving them Ezra Taft Benson’s ‘power of attorney [which] shall not be affected by his “disability” or “incompetence.” However, Benson was already affected by that ‘disability’… Despite a notarized statement by the First Presidency’s secretary, President Benson did not sign those documents himself. A signature machine produced Benson’s identical signatures on these legal documents. Without public acknowledgement, this machine-signed document formally ended an official provision for dissolving the First Presidency that had been in print for ninety years… However, this 1989 document specified that the counselors would not dissolve the First Presidency or surrender their powers despite the fact of the church president’s ‘disability’ or ‘incompetence.’

There is no reason why our leaders couldn’t decide to change this 1989 decision.

I think that making a policy change, so all our leaders could become emeritus would be great. I respect our leaders and honor the difficult work they do. They sacrifice time that could be spent with family, especially with their grandchildren and great-grandchildren. They have very full schedules. They have worked to help build up the kingdom of God, and they certainly deserve a break if needed or wanted. I think there is wisdom in President Brown’s suggestion. Maybe this move by the Pope will be an impetus for some prayer and reflection among the leadership; perhaps, the spirit might whisper what it whispered to President Brown decades ago. Maybe not, but I would certainly wish such a thing for our diligent leaders.