The New Testament Made Harder 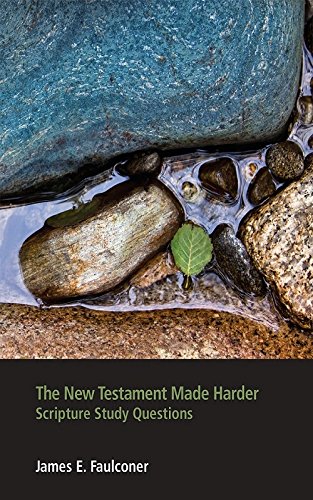 The New Testament Made Harder: Scripture Study Questions, by James E. Faulconer, has already been well reviewed in several places. I can’t do a better job of telling you what’s in it than other reviews, and I’m not qualified to give an academic critique, so instead I’ll share a personal story of scripture study and show you a little of how The New Testament Made Harder (henceforth NTMH) affected me when I was offered the chance to review it for Rational Faiths.

The New Testament Made Harder is part of a series of books written by James E. Faulconer intended as a study aid for Gospel Doctrine classes. The chapters examine texts assigned for each adult Sunday School class. Faulconer gives a little background, typically in the form of some basic history behind the text, then starts offering the reader questions. The questions are often accompanied by references to related scriptural texts or other information that may guide the student toward deeper or more informed answers without dictating what those answers should be.

My Scripture Study Before NTMH

When my older brother went on a mission, I wanted to follow his example. So as a Sophomore in high school I committed to read from the scriptures every day. It wasn’t always much, but it got me through the Book of Mormon a couple of times, the New Testament, and almost all of the Old Testament. My Mom had helped me through the Doctrine and Covenants as a Freshman. I read every day with a handful of exceptions for the following 18 years. As a missionary the study increased to at least 30 minutes a day, and afterward continued with 20-30 minutes a day until I was 33. My mission president encouraged us to go beyond the scriptures as part of our study, but to keep the scriptures and the core of our study. Then my wife and I had our first child.

With the intense disruption of my patterns brought about by fatherhood, my scripture study became sporadic. In addition I had made limited progress in understanding for several years. I began to discover that other books were giving me greater insight into scripture and into lived religion than I had found for several years from daily scripture study. To avoid long and complicating details, life had intervened, and the ability and desire study scriptures in the same way was gone. I haven’t taught Sunday School in almost two years, so the drive to study out of duty was also gone. I began in earnest looking for the inspiration LDS scripture once gave me in even broader sources, incorporating into my Mormonism what I could understand from the Tao Te Ching, research on human development and psychology, social science, LDS scholarship, and scientific inquiry into our Heavenly Parents’ creation, as my patriarchal blessing had counseled.

I made a foray into understanding where the Book of Mormon came from and how we got it. I started examining the strongest evidence I could find for or against different explanations including a several month study of the field of stylometry. I came away with a greater understanding for viewpoints other than the standard LDS story about the Book of Mormon’s origins and significance, and also much stronger reasons for believing the Book of Mormon is a truly unique book. At the same time, my analysis of the evidence I studied led me to see prophets and the Book of Mormon in much more human, and less perfectly inspired, terms. I began to see evidence of ignorance and bias where I once looked for perfect light and knowledge. The prophets were still great men to me, and still inspired, but the greatest inspiration now came from seeing how our Heavenly Parents work through flawed individuals to bless humanity.

While this realization dampened my desire to study daily, it inspired me to take greater personal responsibility for figuring out what I think is good and right to do. It lessened my need to fix everybody and make them perfect, since our Parents didn’t seem to think that was crucial, even for Their prophets. I still read scripture, particularly sharing the stories with my children, but with notably less dedication than the 20-30 minutes a day. I could still find devotional feeling by opening to favorite passages (there are a lot of them) and reminding myself of the good word and the atonement I aspired to. That was where I was when NTMH came.

When The New Testament Made Harder arrived in the mail, I went right through the Introduction and History. This is clearly a book intended to aid devotional study of the New Testament. It provides barely enough history and scholarship to be true to little disputed consensus beliefs of scholars, as I understand them, and to contextualize the New Testament in ways essential to the Lessons that comprise the bulk of the book. I picked a few lessons and read through. The questions were great. They brought a smile to my face. All the familiar, Sunday School verses, with their familiar, Sunday School interpretations–even the more involved interpretations that I had worked for over the years–were opened just a little farther. Faulconer was giving me an invitation to think really hard. I like thinking hard. It feels good. Here are some examples from a favorite passage of scripture, Lesson 8 on Matthew 5:

Where I Am Now

I’ve only shared a taste, but I’ll tell you where I am now. I’m trying to read a little scripture again, most every day. I like thinking, and I like studying, but I’m reading more for devotion than anything else. Picking through Faulconer’s lessons now and then gives me a bit of all three–thought, study, and devotion. I actually smile as I study this book–something I haven’t done with scripture study since I read the Psalms and discovered all the wonderful music in them. And I would give it as a gift. If I had a friend teaching Sunday School who I knew liked preparing well, I wouldn’t hesitate to make a gift of it. I might even send it to my mom. Nothing in it fights against the church’s curriculum, but so much in it invites us to take the scriptures seriously and pass beyond our ingrained assumptions about their meaning. Lovely work, Brother Faulconer.