The Hitchhikers Guide to Eternity (for and in behalf of Douglas Adams, who is dead) 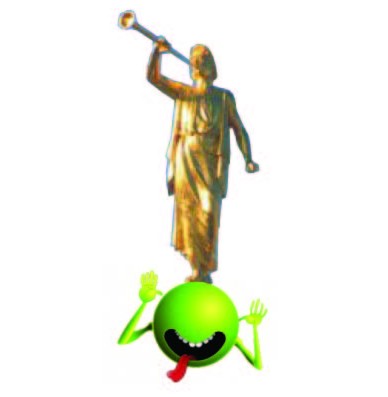 Adams was an atheist. I don’t know if he still is. In the book “The Salmon of Doubt”, published after his death, he advises:

“If you imagine a puddle waking up one morning and thinking, ‘this is an interesting world I find myself in- an interesting hole I find myself in- fits me rather neatly doesn’t it!’ This is such a powerful idea that as the sun rises in the sky and the air heats up and as, gradually, the puddle gets smaller and smaller, frantically hanging on to the notion that everything’s going to be alright, because this world was meant to have him in it, was built to have him in it; so the moment he disappears catches him rather by surprise. I think this may be something we need to be on the watch out for”

Which begs the question, among others: “So the puddle just wakes up then?” But despite his dogmatic atheism, Adams’ writing has provided insight in understanding spiritual matters.

In his cult- classic “The Hitchhikers Guide to the Galaxy” he tells the story of “A race of hyperintelligent pandimensional beings” who “got so fed up with the constant bickering over the meaning of life…that they decided to sit down and solve their problems once and for all. And to this end they built themselves a stupendous super computer which was so amazingly intelligent that even before its data banks had been connected up it had started from I think therefore I am and got as far as deducing the existence of rice pudding and income tax before anyone managed to turn it off.”

They named the computer “Deep Thought” and posed the question: “What is the meaning of life, the universe and everything.” After pondering the question for seven and a half million years, Deep Thought produced an answer:

This answer proved quite confusing and not at all satisfying. When pressed for clarification, Deep Thought told them that what they really need to understand was the question. The computer told them that, although it couldn’t provide the question to the answer, it would help them design an even better computer that could. the new computer resembled “an utterly insignificant little blue-green planet…orbiting a small unregarded yellow sun in the uncharted backwaters of the unfashionable end of the Western Spiral arm of the Galaxy” they named it “Earth”

Unfortunately, just before the question could be revealed, the planet/ computer was demolished to make way for an inter-galactic highway. However, the protagonists in Adams’ story are capable of time travel which provides the premise for the other four books in the trilogy.

Adams observes that “This planet has a problem which is this: most of the people living on it are unhappy for pretty much of the time.”

Despite all of our best efforts to do things and buy things that are supposed to make us happy, the general planetary ratio is grossly imbalanced. To compensate, we invent justification for our unhappiness and even try to help others to be unhappy too.

“It is an important and popular fact that things are not always what they seem. For instance, on the Planet Earth, Men has always assumed that he was more intelligent than dolphins because he had achieved so much- the wheel, New York, wars and so on- while all the dolphins had ever done was muck about in the water having a good time. But, conversely, the dolphins had always believed that they were far more intelligent than man- for precisely the same reasons.”

Clearly, we get ourselves in trouble when we think we know the answers.

A couple thousand years ago, before digital watches and before air-conditioning provided an environment where we could be more happier, Humans were struggling, trying to be happy or, at least, be not sad. A hyperintelligent pandimensional being sent Jesus Christ who proved his divinity by performing service. And miracles. When the locals noticed his exceptional abilities, they started asking questions. If you took all the questions, added them up and calculated the average, you would arrive at: “What is the meaning of life, the Universe and everything” to which Jesus answered:

Therefore, love=42. Or something. I haven’t quite figured it out. Don’t panic, I’m gonna spend some more time figuring out the questions to his answer.