The Gift and Power Meets Stylometry 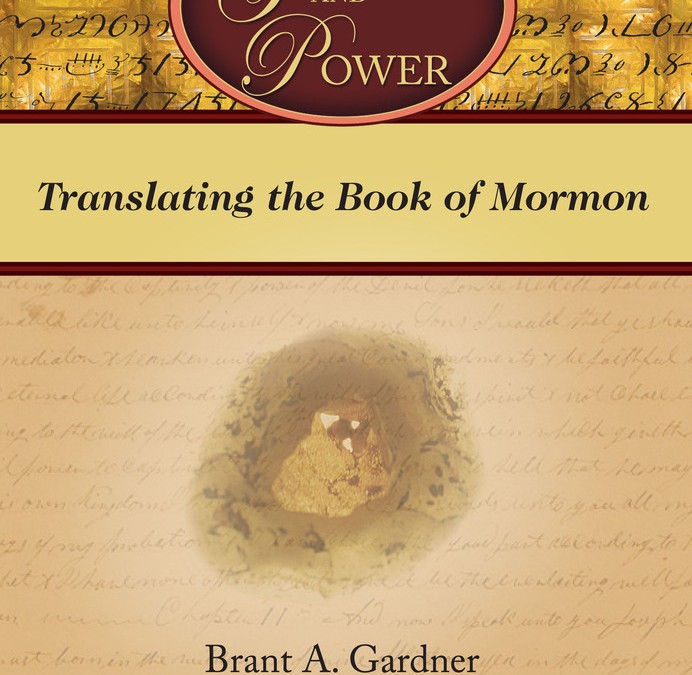 The Audience and an Overview

I think it would be a mistake to read The Gift and Power: Translating the Book of Mormon, by Brant Gardner, as an apologetic work. Gardner certainly takes up, and to an extent takes on, many of the reasons people give for rejecting the ancient, historical setting for the Book of Mormon. He even spends the first third of the book setting the stage for how we can understand Joseph Smith as a translator. He lays out such issues as what the frontier mindset was, what magic meant in Joseph’s time, how magic and science and religion are not really so far separated in history, and how people tell stories to find meaning. Perhaps the most interesting thing to me, from this first part of the book, was to notice that the earliest written account we have of Book of Mormon translation–written third hand, but from the 1830s–already contained elements we now are quite sure are incorrect or mythical. Despite spending considerable time treating these topics, especially criticisms of the Book of Mormon text that relate to translation, Gardner’s book is written to best influence believers.

As a book for believers, The Gift and Power has potential to change an entire culture. (As evidence for how disruptive this work could be, see how it is not simply argued against, but labeled as a setback to understanding by an author espousing a more strictly revelatory view of translation.) I’m not claiming that Gardner could singlehandedly change Mormonism. The effectiveness of Gardner’s book comes in large part from how it synthesizes the work of many others. Gardner’s views, like many of mine, are strongly shaped by naturalistic explanations of events, while still believing in God and in naturally (typically humanly) mediated divine intervention. He has tried very conscientiously to take what evidence is there and create a model that encompasses it all. The result of this exercise is a model where prophets and translators speak from their own experience and understanding. It’s a model of revelation where all the biases and errors of prophets are preserved right along side those profound moments of inspiration. It’s a model that requires, for those prepared to hear, the hard work of continually seeking and owning one’s moral actions. Prophets are striving guides, but they are ruled as much as any of us by the exigencies of mortality.

At the same time, Gardner’s obvious underlying faith and faithfulness to the LDS church, combined with the manifold evidences seeming to justify Joseph’s story of divine translation, could easily allow a believer looking only for apologetic ammunition to overlook or ignore the ways the book challenges his or her assumptions about revelation, the role of prophets, the absolute correctness of scripture, and other similar foundational religious beliefs. On the flip side, for a reader who believes the Book of Mormon is a 19th century creation, the fact that Gardner has targeted the book principally at an audience that believes in Book of Mormon historicity could, by focusing on the weakness of details in Gardner’s arguments, cause that reader to overlook the explanatory strength of the pattern Gardner has painted.

Perhaps the biggest reason I like The Gift and Power is that it confirms so many of my own beliefs. I know there is danger in this, and that it is even predictable (nearly everything ends up confirming our own prejudices), but I’d like to spend some time discussing the convergent evidence to show why I think the confirmation is more than superficial.

Based on stylometric evidence that I have discussed previously and at length (I’m going to be lazy and not find all the old links), I determined that there are a few multiply attested facts regarding authorship of the Book of Mormon–attested by the methods and results employed by both critics and supporters of Joseph Smith’s translation story. These are:

These observations best support, to my mind, a very ordinary picture of translation of the Book of Mormon text. I see a translator reading the text, thinking through how best to say things in his own language, saying it as best he can, even though he doesn’t always perfectly understand the words of the original text, and mimicking religious language because he was steeped in it and thought that’s how scripture should sound–even new scripture. By doing his best to faithfully reproduce the original text without losing its meaning, he maintained many of the noncontextual speech patterns of the different authors, of course transformed into English equivalents (although not always grammatical ones). That’s the model best justified by stylometry, I think, even though one has to substitute “looking in a hat” for “reading”, and “relying on divine inspiration” for “using personal knowledge of a foreign language” as the historical mechanisms for the translation. And as best I can tell, it is the model Brant Gardner presents in his book.

I think there are only a few specific evidences that favor my (and I’ll say Brant’s, since I think they are the same) model of translation with very little ambiguity. The real strength of this model lies in how broad and detailed its explanatory power is compared to other models, but to get a clear picture of that you may have to read (and possibly reread) all my posts on stylometry (summary here), and more than one of Brant Gardner’s books. To restate the model using Gardner’s language, functionally equivalent translation means you translate as closely to the original as you can, maintaining the meaning of words, phrases, and sentences by reproducing them with English words and idioms that will be understood by your audience. You want to faithfully reproduce the language and feel/style of the original text, but not at the expense of your audience missing the meaning of the original author, so the English text represents a continual compromise between idiomatic translation and attempts to match the original language. On relatively rare occasions, where there is compelling reason and evidence, the translator must insert a truly literal translation (as in the letter by letter spelling of names), or some loose, explanatory material (as when the context of the original text is completely uninterpretable for the intended audience). Otherwise, the translation is one of functional equivalence, or what we usually think of as ordinary translation. We know word for word translations don’t work, and too conceptual a translation we would be more inclined to call a reworking of, or commentary on, or inspired by the original text. In addition to the stylometric evidence of unknown, multiple authorship, I want to highlight what I think is a very short list of evidences strongly pointing to translation over 19th century creation. As I mentioned at the beginning of the paragraph, I think there aren’t many to be found. Most are only suggestive, and their strength is in the near completeness of the model. This is why Gardner has also written a multi-volume commentary on the Book of Mormon placing it in a Mesoamerican historical context–the pattern is powerful even though the details are individually weak. Here are the few, strongest details from Gardner’s book:

That’s it. With Gardner, I dismiss most apparent Hebraisms (and perhaps all) as artifacts of Joseph’s translation–evidence of biblical influence, not antiquity. Other evidences seem easily explained by multiple hypotheses and give weight to functionally equivalent translation because it explains more details with more meaning, fewer assumptions, and fewer contradictions than other hypotheses. If God, angels, and gold plates are within the realm of possible realities for you, then I haven’t seen another understanding of translation that comes close to the explanatory power of functional equivalence.

If instead you first prioritize the likelihood of Joseph’s story and relegate the Book of Mormon text to second place, once you have largely made up your mind about Joseph (or God), then I can understand favoring other hypotheses. They may be tenuous when it comes to explaining parts of the extant text. I may even question the validity of your reasons, but I acknowledge that invoking angels and disappearing plates to explain the text source is dubiously scientific, however much better functionally equivalent translation (and the implied, authentic source) explains the text than other more or less naturalistic hypotheses. I weight the text as the hardest evidence and don’t mind some unexplained craziness floating around the things we can’t see. We don’t have the source text. I can’t look at the plates to prove anything about them. I can believe the witnesses or not. We can’t see through Joseph’s mind what he saw when looking in the hat. We can reconstruct much of Joseph’s world, but only with significant ambiguities. What is not missing, not lost to history, and not dependent on shifting personal accounts, is the Book of Mormon text itself. So when it looks like a translation, that’s where I start. All other opinions I have must deal with that set of facts. Gardner is writing mostly to people like me. People who see the Book of Mormon as a translation, and people who are ready to start from there to better understand prophets, revelation, personal moral authority, and how the hand of God reveals itself in our very human world.