The Consolation of Boethius 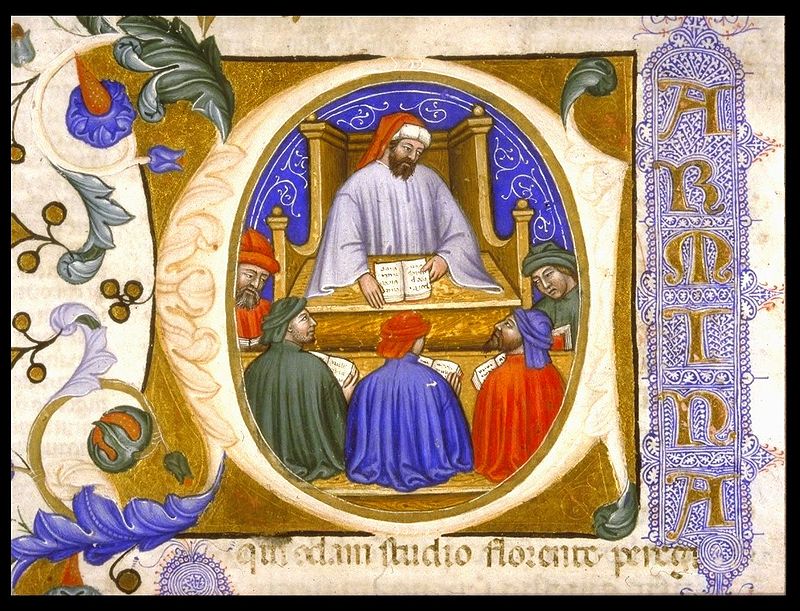 Sometimes in your studies, you run across pleasant surprises. Recently this happened to me.  As I was studying medieval church history, I ran across the name Boethius. I learned that Boethius was a powerful influence on the scholastic movement with writers like Thomas Aquinas, in addition to literary greats like Chaucer and Dante. The Aquinas connection made sense to me, given that two of the main influences on Boethius’ writings were Aristotle and Augustine, as Boethius and Aquinas shared that in common. I wasn’t sure why I was drawn to this character; in particular – especially given the relative obscurity of the reference in my readings – I would like to think it was the Spirit of Wisdom herself leading me in this direction.

As son of a Roman Senator, Boethius was born into privilege; however after rising through the ranks and eventually being appointed Consul, his life would take a very different turn as the political tides shifted and he would find himself thrown into prison for political reasons by the emperor Theodoric. From what I could gather in my research, Theodoric had issues of his own that led to his insecurities and mistrust of his top advisors. Boethius was executed a year later in 524 CE.

During Boethius’ time in prison, he writes The Consolation of Philosophy, which is his attempt to make sense out of his unjust suffering. In his desperation, Boethius seeks the help of divine Wisdom to help him understand why his life went the way it did. Boethius describes her as having the form of a woman “whose countenance was full of majesty, whose eyes shone as with fire and in power of insight surpassed the eyes of men.”[1] In essence, Boethius was describing a goddess figure; in Mormon terms, Wisdom would be a manifestation of Heavenly Mother. One could even say Wisdom was the Holy Spirit.

During his dialogue with Wisdom, Boethius asked some very pressing questions about the nature of free will and human suffering. He was like a Job figure in that regard, wanting to know why it was that the innocent suffered and the wicked prospered. When she first appears, Boethius is tongue-tied, almost as if he has forgotten to whom he is speaking. Yet, Wisdom reminds him that he has been schooled in her ways since childhood – this of course being a reference to his studies of Greek philosophy and having received a classical education.

Understandably, Boethius is baffled as to why Wisdom would appear to him in his languished condition. Referring to the unfortunate plight of the philosophers who have gone on before, she responds that she would not leave him friendless, adding in a lament of her own plight, “they dragged me, for all my cries and struggles, as though to share me as plunder; they tore my (seamless) robe which I had woven with mine own hands, and snatched away the fragments thereof.”[2] Admonishing him to dry his tears, Wisdom goes on to remind Boethius that he has indeed seen good fortune throughout his early life, and that no one is at perfect peace in this life. Everyone has trials and struggles, whether born into obscurity or wealth; no one is immune from suffering. Wisdom herself understands because she has been there and has felt misunderstood by those who claim to know her.

While reading through Boethius’ dialogue, I learned some things about Wisdom that got me thinking about what it means to truly have joy in this life, something that I still struggle to understand. It does seem that some people have it easier than others, and as Boethius himself laments, God often “sends hardships to the good and grants the desires of the wicked.”[3]  And Wisdom is not all surprised that anyone would look at the state the world is in and be confused by this. Life just doesn’t make sense and often seems unfair. What one person finds easy another finds very difficult, and vice-versa.

And yet, Wisdom goes on to explain that everyone has their particular strengths and worthy contributions to make, regardless of their weaknesses. Everyone, even those in positions of power, have their secret scars and personal worries that they carry around. True joy is found in realizing this and learning to embrace the highest good in spite of your limitations. The lesson in this is as children of God, we can find joy in learning how to treat others with dignity and respect, realizing that nobody is perfect, and that even though life seems unfair, Providence watches over us and all things will balance out in the end. According to Wisdom….

If one may not unworthily compare this present time with the divine, just as you can see things in this your temporal present, so God sees all things in His eternal present. Wherefore this divine foreknowledge does not change the nature or individual qualities of things: it sees things present in its understanding just as they will result some time in the future. It makes no confusion in its distinctions and with one view of its mind it discerns all that shall come to pass whether of necessity or not.[4]

While these answers may seem simplistic for some, the dialogue between Boethius and Lady Wisdom is profound in its own right for a number of reasons. First, Boethius dares to ask the difficult questions about life, and he provides answers concerning the nature of providence and free will that reflect a timeless wisdom; in reading it, you naturally want to learn more. Second, in spite of his suffering, one can sense that Boethius is fulfilling his divine purpose through his musings, as he would later have influence on the scholastic writers and theologians of the Middle Ages. Third, although the dialogue between Boethius and personified “Wisdom” is questionable at best- as scholars have speculated he may be consulting with his real or imagined ‘muses,’ or even creating an artificial dialogue with his studies – I would not be altogether surprised to find out that he was consulting with Wisdom Herself- Heavenly Mother, as the answers he provides are just too profound for words.

Perhaps Boethius was the first to pray to – have a dialogue with – Heavenly Mother. Like I said, I would not be surprised in the least.