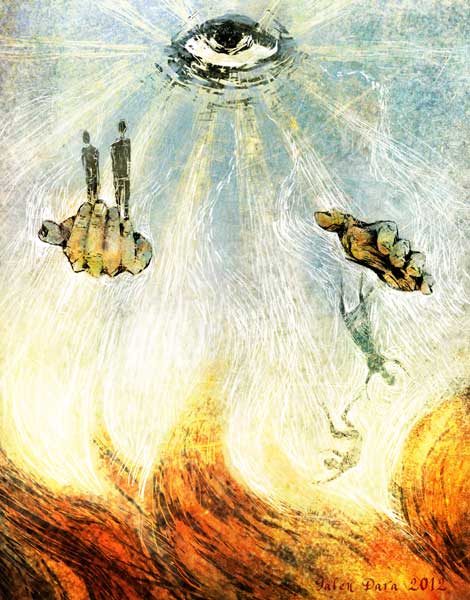 Hawkeye: War isn’t Hell. War is war, and Hell is Hell. And of the two, war is a lot worse.
Father Mulcahy: How do you figure, Hawkeye?
Hawkeye: Easy, Father. Tell me, who goes to Hell?
Father Mulcahy: Sinners, I believe.
Hawkeye: Exactly. There are no innocent bystanders in Hell. War is chalk full of them – little kids, cripples, old ladies. In fact, except for some of the brass, almost everybody involved is an innocent bystander.

In my classes at UVU we always watch the Fog of War as part of our section on war and conflict. The film is an extended interview with Robert McNamara, a secretary of defense under Kennedy and Johnson and the prime architect of the Vietnam War. One of the now famously shocking revelations from the film comes when McNamara recalls serving under Curtis LeMay in the Pacific Theater during WWII. Together they devised a kind of shock and awe campaign meant to pummel the Japanese into submission (McNamara also concludes that the atomic bombs later dropped on Nagasaki and Hiroshima were gravely disproportional and unnecessary because of this campaign and others like it). They fire bombed major cities, burning to death around 100,000 children, women, and men. LeMay remarked to him that had they lost the war, they would have been justifiably prosecuted as war criminals. He was right; only those who lose wars are condemned for the horrors they inflict. It is the victors who write the history and prosecute the defeated.

But of course, burning innocent people to death (especially children) is an unspeakable atrocity no matter what results from it. You could tell McNamara thought the same. It weighed on him as an old man, decades later. He came to believe that disproportionality in war was immoral, whether it resulted in victory or not. Ironically, from a purely strategic standpoint this may be one reason Vietnam was so catastrophic for the US–we committed plenty of atrocities over there, but we didn’t pummel them into submission by killing half the civilian population. And perhaps this is partly why we’ve remained in conflict in the Middle East for so long.

Nothing makes sense in war. No logic applies except the logic of chaos. The only time to rationally consider your principles and carefully weigh conflicting values in the name of peace is before you enter the war. Once you are there, it’s easy for everything to get turned upside down. It’s impossible not to be complicit in some way for everything that occurs thereafter. Of course, I don’t know this from personal experience, but there are countless stories from veterans in wars throughout history haunted by the terrible things they had done, things they would have been appalled at doing outside the war context, things they are not only ashamed to admit, but do not understand. Because war invites disproportionality. It erases the boundary lines that indicate “this far is too far.”

McNamara refers several times to the concept of the “fog of war,” the uncertainty in situational awareness experienced by participants in military operations. This is another reason he argues for proportionality, why he says rationality will not save us in times of war, why believing and seeing are both often wrong, why you have to be prepared to constantly re-examine your reasoning: war’s fog obscures everything. But the paradox is that the very disproportionality he proposes avoiding is an inherent result of not being able to see or believe correctly, of not knowing precisely what it is you need to re-examine, and if you can’t do those, you can’t avoid disproportionately starting a fire that will burn down far more than you intended before it is put out. “Who are the bad guys and who are the good guys” is merely another way of asking, “Who deserves to win?” Each person in the conflict naturally thinks it is them. Few genuinely want to cause as much suffering as possible for its own sake. Virtually no one perceives their cause as being for the victory of the forces of evil and the defeat of the good.

In a sense, all suffering is war. Not just pain, but mind-altering, prolonged affliction, the struggle to make sense of the world and the battle to retain something of our identity while the world is being torn apart. And like war, suffering comes for the innocent and the guilty without distinction. Being surrounded by those who are not suffering like you are (so you might believe) only adds to the feeling that your suffering is a crack in the universe, a portion of Creation forgotten by God, and imbalance in the natural order of existence. Suffering is a fog that can obscure everything, voiding reason, disproportionately stripping you of the ability to cope and rationalize. Later, you might be able to write your suffering into a narrative that makes sense of your present, but it’s chaos while you’re inside of it, and there’s really only one language that pierces the fog of suffering–not the language of divine purpose or self-improvement or personal experience, but the cry of lamentation. The lament is the only truth able to withstand the heat of pure torment.

I tried to spell out the insane chaos that strips logic bare in the midst of violence and suffering in an essay I wrote a few years ago, in some ways the centerpiece of everything I’ve written about regarding evil and suffering. In the essay I argue that the prophet Alma had confidence in a clear faith-logic that informed him what God could and would do when it came to extreme suffering and violence, a theodicy that clearly explained to him how things work in a world of suffering watched over by an all-powerful and all loving God. Even watching children burn didn’t dissuade him from this logic; it was all a part of the plan. But later, while suffering himself for a prolonged period at the hands of the same men who threw the children into the fire, he’s unable or unwilling to marshal the same logic. Everything had turned upside down. His earlier explanations didn’t seem to apply. All he could do was muster a cry of lament, much like the Psalmist in the Hebrew Bible and Jesus on the cross. This, perhaps, is the only fully authentic response possible. The lament transcends explanation and reasoning, rationalization and justification. It is a summoning from the depths that goes beyond facile notions of good and evil and their causes. It calls us to repentance for trying to explain that which cannot and should not be reduced to the familiar categories we think we need in order to have both God and suffering in the same world.

The lament is a pure cry to God. I don’t know that we really allow its presence in our communities. It would so often be hidden and obscured behind explanations and testimonies and protocols, muffled by confident proclamations of God’s plan. And I don’t know that God always heeds the call of the lament. Or maybe God is always in the midst of God’s own cries and lamentations at the suffering of the universe. But perhaps our lamentations and cries of mourning are just as much for others as they are for God. Learning to better recognize and respond to these cries might be the most divinely human thing we could ever do.