Straight Pride? I Do Not Think That Means What You Think It Means. 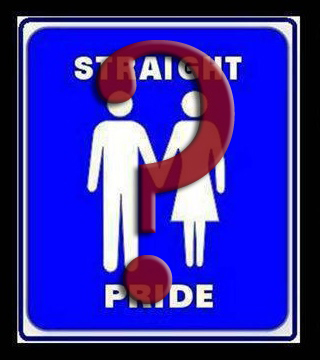 Many of you have probably seen different versions of the “Straight Pride” image (see the version I provide here to the left). They have been appearing in higher frequency on social media and I have, for the most part, ignored them for reasons I will explain below. It was not until a friend of mine recently shared the image on their Facebook wall that I felt I needed to respond to this trend.

The idea of “heterosexual pride” or “straight pride” has its intellectual roots in the 1980’s and 1990’s[1] as a political response to “gay pride.” As discussed in the 1993 Massachusetts Governor’s Commission on Gay and Lesbian Youth, there were demonstrations at Harvard University’s fourth annual Gay, Lesbian, and Bisexual Studies conferences, and only a couple of years before at Mt. Holyoke College and the University of Massachusetts-Amherst.[2] These responses were generated out of an intense antagonism toward the LGBT community, to the point of Young American for Freedom (YAF) leaders waving Bibles and American Flags, shouting “vitriolic denouncements of lesbians, gays, and bisexuals.”[3] These groups were not formed to honor their own sexuality, standards, or belief, but were instead created to comment specifically on Gay Pride in an antagonistic way.

Many people think that by making the statement that they are proud to be straight or heterosexual should not be taken in any way as offensive because the LGBT community calls for gay pride, especially during the Gay Pride Parade. There is a problem with that assumption that needs to be addressed if people wish to claim “heterosexual pride.”

There are myriad reasons for holding the Gay Pride Parade and Gay Pride Month in June. Many people I see discussing the topic often seem to think that it is simply the LGBT community pressing their “agenda”[4] into the public conscience. There is so much more to the story than this. We seem to have forgotten about the riots in the late 1960’s that led to what LGBT Pride Month commemorates. It was routine in the 1960’s for the police to raid gay bars, which were some of the only establishments at the time that allowed the LGBT community services. Fed up with the treatment that they were receiving, the Stonewall Riots were a response from the LGBT community against these police raids and are now widely seen as the single most important event for liberating the LGBT community. By 1970 the first Gay Pride marches were taking place in New York, Los Angeles, and Chicago in commemoration of these riots. The parades are not in and of themselves meant to share a specific agenda other than remembering that we are all one people; that we need to respect and love one another’s circumstances; and that the abuse that Americans have shown each other in the past is not to be tolerated and has to end. It is to this end that the Gay Pride parades are carried out: to demand the same respect from the respective surrounding communities they live in that the heterosexual community enjoys, and to do this through making statements such as the early “Gay is good” by Frank Kameny, inspired by Stokley Carmichael’s even earlier “Black is Beautiful.”

The fact that our community would call out for “heterosexual pride” stuns me. I find it intellectually void and mentally draining. The fact that individuals would first claim this, and then others would continue it, baffles me. To clarify, and make sure this is clear, I am married to a loving wife. We have one child, and are extremely happy. I am proud to be the individual that I am, but I am also proud when others find themselves and live their lives the best way that they see fit, as long as they provide the same respect for others. As proud as I am, I could never, in good conscience, claim “heterosexual pride” because it is in too much of a response to the LGBT community and their deserved Gay Pride. They have earned that pride through their suffering in a way that I have not.

I have never been bullied for being straight; I have never been beaten for finding girls attractive; I have never had to come out to my parents that I find girls attractive, risking the possibility of changing my relationship with them forever, for better or worse; I have never been kicked out and disowned by my parents because I am heterosexual; I have never been told by the government that I cannot adopt a child with my wife because we cohabitate;[5] I have never been fired for being heterosexual; I have never lost a friend for coming out heterosexual to them; I was not denied the ability to marry my wife; I have never been told that I will not make it to heaven because I am heterosexual; I have never have my life threatened, my property stolen or damaged for being heterosexual.[6] Nothing negative has ever happened in my life because of my sexuality, and because of that I am grateful, but at the same time I feel for the LGBT community that they have to go through every one of those experiences listed above and more. I cannot stand the inability of the people of our age to see outside of themselves for only a few moments to see life in another’s shoes.  I think it is important to look outside of ourselves for a moment if we (the privileged majority) are going to make statements like those made in the image. For me, once reflecting on the past is done, I revise my mindset accordingly and move on, hoping that the empathy I have been granted through this experience will allow me the ability to reach out to those who see it important to actually claim pride for who they are.

Today we might think that being “politically correct” in an “upside down”[7] society is a negative thing, but if we retroject this view of life back to the 19th century we see it is exactly what the Saints were hoping for when they cried out for help and redress in Missouri and Ohio. They were the ethnic minority (and they were viewed as an ethnicity, see Terryl Givens, Viper on the Hearth [New York: Oxford University Press, 1997], 49), and therefore did not receive help because lawmakers of the time saw themselves going against the majority if they helped Joseph Smith and others reclaim property in Missouri. Sometimes it is more right to be loving than follow the strict rules of a democratic society. This is why being “politically correct” is important for our day. I am also unashamed that I am straight, but that is (and I would expect you would agree) because I think that no one should be ashamed of who they are as long as they are kind and loving to others and true to themselves.

I think the author of the above image simply has it wrong, and this image will propagate to thousands of people who will not realize the real damage the picture will cause. To me, to continue to use my above analogy, it would be the same as descendants of the mob who committed the massacre at Haun’s Mill in 1838 going up to the survivors and their children afterward and saying, “Mob Pride,” or something to that effect. Many people might not realize this because they forget the real suffering the LGBT community has had to go through which is the cause for them to cry out for pride; to make the statement that they are not ashamed and that they will not conform to the majority’s views the same as those early would not conform to the views of the Missiourians.

To end, I have to state along with Davey Wavey that the reason “there is no straight pride parade is because life is a straight pride parade.”[8] Society already accepts heterosexuality and therefore provides for the needs of the straight community. I plead with those who read this to rethink these images and the ideological framework that holds up the very political statement “heterosexual/straight pride.

[4] See the recent statements by the Benham brothers in their CNN interview here.

[6] To clarify, I came up with this list before I saw Davey Wavey’s video. His list is very similar, yet very different, to mine.

[7] What exactly constitutes an “upside down” society? I think that Missouri had an upside down society during the time that it was legal to kill a person simply because they were Mormon. I see the society that discriminates the minority in behalf of the majority as upside down. I view the society that accepts every single individual within that society as someone important and necessary and needed for the life and breath of continuance of that society as a right-side up society. The more open and loving we are to one another, no matter our differences, the better our society will be.