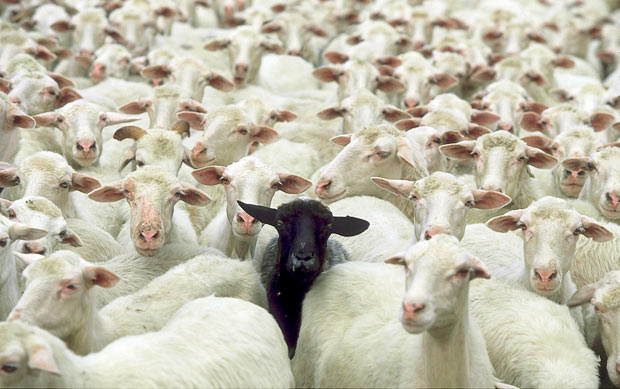 I was going to write about why Middle-Way Mormonism is awesome, but complaining is a lot easier. I was also going to write a sizable introduction with all of the nuance and balance that you would expect from someone trying to make a middle-way work. I took the easy route and wrote about the parts that suck instead.

If word gets out that you are a “doubter” or a “questioner” you will no longer get the big callings in the church. You might make it as high as Elder’s Quorum President. You are not going to become the next President of the Church. Church leaders probably won’t consciously discriminate, but you can count on their inspiration leading them in a different direction. The guy who won’t shut up about the evils of gay marriage has a much better chance.

This affects believers as well as non-believers, of course. Everyone knows that the biggest difficulty in missionary work is not Blacks and the Priesthood, but boring investigators to death. However, the true believers have the benefit of knowing that their eternal salvation is at stake. Once I rejected that idea, going to church suddenly feels even less enticing.

When someone joins Mormonism they join a new faith community and start attending new meetings and are baptized a member. If a person leaves Mormonism they stop attending church or even resign completely. All of these are ritual acts that show the change you have made. What happens when you shift to being a liberal-Mormon or a non-believer who remains for community and family reasons? You go back to church the next Sunday. I sometimes feel the need to stop attending church meetings for no other reason than to feel like I’ve done something. My beliefs have been changing drastically over the past few years, but everyone at church still kind of seems the same. There is no ritual to demonstrate my change, or non-literal Sunday School class to go to during the second hour. Maybe if I just send a letter to President Monson he’ll reveal the “I’m a liberal now” ordinance in the next General Conference.

President Monson is not amused.

scriptures hard enough. Ex-Mormons think you’re just looking for excuses to add a few “sins” like drinking tea and still holding on to a few dumb beliefs because you’re not ready to see the whole truth yet. If you make too many comments in church meetings or ask a few too many questions you may be accused of being a wolf in sheep’s clothing, as has happened to me: http://rationalfaiths.com/went-nephi-korihor/ You would know if I was in sheep’s clothing, because I look damn good in wool. If your family becomes uncomfortable with your changing beliefs it may lead to difficult conversations or love bombing.

Church leaders don’t want you to talk about “doubts” or new beliefs you have developed during a faith transition. Make no mistake, while the Church has released statements that it’s okay to doubt, they’ve also said that you’re not allowed to try and convince others of your point of view. You may think that your new belief is beautiful and based on the scriptures, but if you share any of those beliefs too broadly you could get accused of apostasy, which is an excommunicable offense. Because Mormon Doctrine is never actually defined you never know when a belief of yours is going to be on your local leaders’ no-no list. I once bore my testimony in church about how I had experience with being discouraged about the church at times, and that if others had any problems they could talk to me. My bishop called me into his office and asked if I was trying to start an apostate group. I was so surprised I laughed in his face, which didn’t help my case. You can’t change the Church.

Sometimes it seems much more convenient to just go back to how you were before: a sometimes bored but generally engaged and believing member. There are no potential issues with family shunning or disciplinary councils. Pretending that you are the same believer you always were is not a good solution, depression is a likely result.  However, once you have realized that something isn’t true, no amount of wishing will make you believe it again. Having faith in something without evidence is one thing, trying to believe it with evidence to the contrary is another. Elder Andersen may think you’ll change back if you try hard enough, but wishing won’t make it so. Church leaders aren’t very good at dealing with diversity in belief. Attempting to make Mormonism work while not believing in the historicity of the Book of Mormon or the Priesthood restoration can be difficult for them to comprehend.

Bonus: It will all be worth it (maybe).

The main key to a middle-way is taking ownership for my own beliefs. When I know something isn’t true, I don’t force myself to believe it anymore. I’m not dependent on what church leaders tell me I have to believe anymore. Does this cause problems? Of course. Is it more healthy for me? I definitely think so. I don’t know what path I will take in the future, I’ve been taking this middle-way path for several years now. I could eventually leave the Church, or I could find closure in other ways to remain an active member. What I do know is that the path is mine, and that the middle-way is about my journey. No one else can dictate that. This doesn’t automatically make it a selfish path. It’s much easier when we can all support each other. We become a community when we can help and encourage everyone regardless of their level of faith. I reject the idea that we have to retrench and draw battle lines. We’re all in this together. The community can be the greatest strength of a church: http://rationalfaiths.com/old-ladies-taught-gospel/