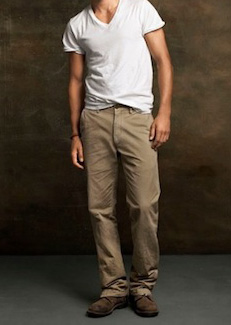 The first time I was called to serve as a Bishop’s counselor, I had purple hair. It was a big hank, right in front that was actually violet but since the rest of my hair was so dark, you’d only notice it in bright light. I was going to art school in Seattle at the time so most of my classmates found me rather conservative. One Sunday, after a Sacrament meeting that I had conducted and my Stake President had attended, he put his arm around my shoulders and asked, “Brother Lewis, can I ask you to do something?”
“I’ll consider anything you ask, president” I replied.
“Will you wear a white shirt to church?”
“Uh…Sure”

Why is it that political despots, Church leaders and School Teachers get so hung up on the way folks look? Most school districts in America have policies about personal appearance. I’ll concede that there should be some standards to maintain hygiene for the sake of public health, and to prevent exposure to obscenity or vulgarity. Certain reasonable modesty standards will prevent undue distraction, especially among teenagers, but most of these standards seem to be arbitrary. I was sent home from elementary school one day because my jeans had a hole in the knee. My mom was so mad that she made a patch out of the loudest, brightest fabric scrap she had and sent me right back. Several kids were expelled from my Junior high School for their outrageous haircuts: modified mullets that stood straight up spiky on top and long in the back. A student at my High School was suspended from playing in a basketball game because he refused to tuck his shirt in. My kids are still forbidden from “unnatural” hair colors and from wearing any kind of hats. I’m sure you have thought of several examples as you’ve been reading this. The degree of severity and enforcement of these appearance regulations vary widely based on culture, but I’m confident in guessing that they exist throughout the world. I’ve written before about the benefits of individuality within a culture, which you can link to here, but I didn’t really explore the compulsion to impose restrictions on personal expression.

Why is it that leaders and authority figures seek to dictate something so personal as appearance? As you’ve probably guessed, I have a couple of theories and I hope you will add yours to the comments below. The first is a cynical though realistic view of political control. A despot needs minions to carry out their narcissistic schemes. By demanding compliance to arbitrary standards of appearance, likely based on said despots personal tastes, they can easily see which subjects are obedient and therefore useful. They can identify and squelch any fledgling uprising by simply observing the appearance of their subjects and eliminating the dissenters. The problem is, hardly anyone likes to be treated this way and history has shown that rebellion is inevitable. This scenario has played out to varying degrees in political arenas from national to community politics. It may provide a season of material success for the despot and his lackeys but it is doomed to fail when the natural desire for liberty reaches critical mass.

The second theory is somewhat more forgiving, but the negative results are just as inevitable. The main difference is that teachers and church leaders, presumably, care about their charges. They want their students to make good decisions. They want them to engage in behavior that will result in happiness and prosperity. The problem is that there is no way for teachers and youth leaders to know whether their acolytes are abstaining from destructive behavior like gang membership and unprotected sex. They can’t see if their pupils are praying or fasting or refraining from drug and alcohol consumption. So they seek to control what they CAN see. Haircut/ color, facial hair, white shirts and “modest” clothing become their measure of success.

“The worst sinners, according to Jesus, are not the harlots and publicans, but the religious leaders with their insistence on proper dress and grooming, their careful observance of all the rules, their precious concern for status symbols, their strict legality, their pious patriotism… the haircut becomes the test of virtue in a world where Satan deceives and rules by appearances.” -Hugh Nibley

Another of the dangers with this approach is that these young impressionables are led to believe that there is inherent morality in these arbitrary requirements. If Church leaders in particular, insist on enforcing these standards as a means of control, instead of following the Spirit as advisers and establishing trusting relationships, they risk a generation that judges rather than encouraging one another. School Teachers and administrators will produce workers who assume that the proper skirt length or necktie is an indicator of business acumen.

A significant contributor to the problem is compliance. Blind acceptance of arbitrary standards of appearance will produce negative results faster than incest produces mutants. Be your authentic self, honestly boldly and kindly. I recognize that it’s difficult. Individuality requires a committed path of self-discovery, which is further complicated by our cultural conditioning for conformity. The transmission of personal values into personal style is a pursuit that very few understand, most just “Know what they like” But if your authentic self is golf shirts and Dockers, God bless you, rock those Dockers! Don’t let someone else control your self.