As part of their “Gospel Topics” essays, the Church released an article on the translation of the Book of Mormon [1]. Some of the controversial topics discused include the use of the “seer stone” vs the “Urim and Thummim” and the use of a hat along with these stones. The most interesting section to me, however, was “The Mechanics of Translation.” What was interesting about it? First, they set up the process of tanslation as being somewhat mysterious. They quote Joseph Smith as saying, “It was not intended to tell the world all the particulars of the coming forth of the book of Mormon.” They go on to quote those that recall the translation, usually from decades later, to describe what happened.

There was one very obvious omission, however. The document they refused to use comes from the time of the translation (1829). It comes directly from the mouth of Joseph Smith as recorded by Oliver Cowdery, not as a later recollection but as a scribe taking down his words. It contains a description of how translation of the Book of Mormon is performed. Is this a rare document? Were they unaware of it? It’s unlikely, that document is contained right in the Doctrine and Covenants: D&C 9. Because they set up the translation process as being so mysterious one would think they would use any information available. Secular historians would agree that D&C 9 contains the words of Joseph Smith, believing Mormons would say that those words of Joseph Smith are also the words of the Lord. Regardless, it’s a much better source than secondhand and thirdhand memories. In an earlier revelation (D&C 8), the Lord tells Oliver that he too can translate the Book of Mormon. After Oliver tries and fails, the Lord explains why he was unsuccessful; that explanation is D&C 9.

Why would the authors of the essay ignore D&C 9? It can’t be because they didn’t know about it. We must assume some competency on the part of the writers. They use enough sources to show that they have done their homework. The only reason I can see is that it didn’t fit the narrative they were portraying.

7 Behold, you have not understood; you have supposed that I would give it unto you, when you took no thought save it was to ask me. 8 But, behold, I say unto you, that you must study it out in your mind; then you must ask me if it be right, and if it is right I will cause that your bosom shall burn within you; therefore, you shall feel that it is right. 9 But if it be not right you shall have no such feelings, but you shall have a stupor of thought that shall cause you to forget the thing which is wrong; therefore, you cannot write that which issacred save it be given you from me. 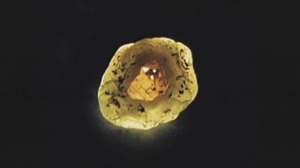 So even if Joseph Smith experienced the translation as reading English off of the seer stone, that could only happen after he studied the words in his mind. Why do the essay authors prefer the view that Joseph didn’t have to think about the words? They tip their hand with the following statement: “…some grammatical constructions that are more characteristic of Near Eastern languages than English appear in the original manuscript, suggesting that the base language of the translation was not English” [1]. So the essay authors are claiming that one can tell the Book of Mormon is a translation because the poor grammar is only there because of the “Near Eastern” original language. This would not be likely if Joseph Smith himself had to compose the words in his own mind. This ignores the question of why God is incapable of translating without retaining the grammar of the original language, of course. If God was providing the words to Joseph Smith to read I would think the English would be rather good, even if the original language was Chinese or pure Adamic.

The authors of the essay ignored scripture (D&C 8-9) to provide what they felt was a more palatable interpretation of Book of Mormon translation. It is a strange interpretation in some ways, because if Joseph himself composed the words it helps Book of Mormon apologetics for certain topics, such as when apologists have explained anachronisms like horses by saying that it was simply the word that best represented the ancient American animal in Joseph’s mind. The authors of the essay set up a view of revelation that is not consistent with D&C 9. Why would Joseph Smith edit the Book of Mormon in later years if the words were simply given to him by God? These were more than simply correcting scribal errors [3]. Revelation and translation are not a process where we receive God’s perfect words in English, but a process whereby men attempt to understand God and represent that in their own understanding.

Brigham Young said, “I do not believe that there is a single revelation, among the many God has given to the Church, that is perfect in its fulness. The revelations of God contain correct doctrine and principle, so far as they go; but it is impossible for the poor, weak, low, grovelling, sinful inhabitants of the earth to receive a revelation from the Almighty in all its perfections. He has to speak to us in a manner to meet the extent of our capacities” [4] and “I will even venture to say that if the Book of Mormon were now to be re-written, in many instances it would materially differ from the present translation” [5].

The authors seem to be setting up an innerant view of the Book of Mormon that is incompatible with Mormonism as a whole. We accept imperfections in our scripture and the fallibility of our leaders. This essay was apparently written by a rather fundamentalist group. These essays are not written in stone, of course, we can hope that the essay can be re-written or at least revised. Describing Mormon scripture as perfect is a method for creating unthinking members. It leads to rejection of the scripture as a whole when we find problems rather than understanding the sources of imperfections in our revelation.

Steven C. Harper . “’That They Might Come to Understanding’: Revelation as Process.”
http://rsc.byu.edu/archived/you-shall-have-my-word/they-might-come-understanding-revelation-process

[2] One example given is thirdhand from a court case in 1831, where someone in attendance gives his account of what Oliver Cowdery said. Hardly reliable. They use it simply because it is so close to the translation (1831). The Martin Harris quote comes from 1881 from the memory of Edward Stevenson from a conversation with Martin Harris 11 years earlier. So 50 years after the translation, thirdhand from a conversation from 11 years prior. The person who gave the most interviews on the topic of translation was David Whitmer who described the translation process as reading English off the stone. One of his famous interviews on the topic was also given in 1881, several months before the Martin Harris conversation was published. It is possible that Edward Stevenson was conflating those articles with his memory of Martin Harris. David Whitmer wanted to present the Book of Mormon translation as a passive process because he disagreed with the changes Joseph Smith was making to his earlier revelations [Saints Herald, February 5, 1887].

See John W. Welch, “The Miraculous Translation of the Book of Mormon” https://byustudies.byu.edu/showtitle.aspx?title=7943