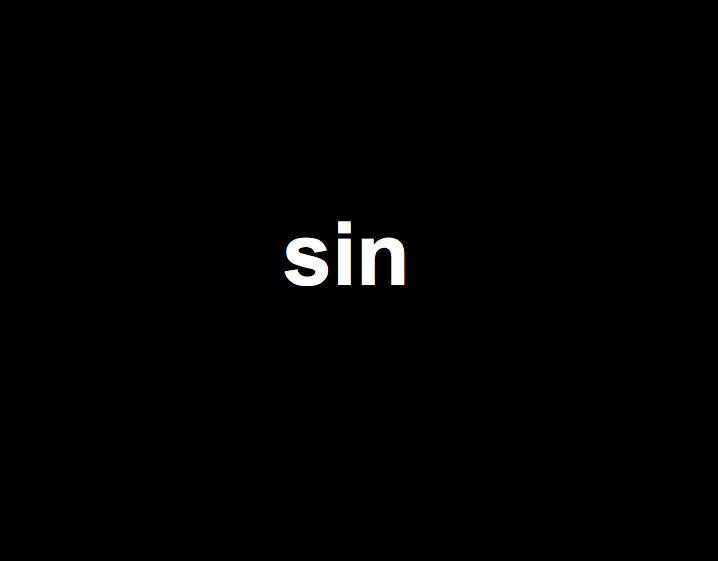 What if sin is a feature of life rather than a flaw? What if we were sent here not to be perfect, but . . . to sin?

I’ve spoken with people who discussed past sins with phrases such as, “but I’m glad it happened like that,” or “if I could go back in time I wouldn’t change a thing–i just learned so much that I couldn’t have learned otherwise.” But if sin really is what I’ve always thought it was, then my friends were wrong: they didn’t need to sin in order to learn that lesson. If they had just been stronger, they could have learned that lesson without sinning. By overcoming sin we beat the level, and it’s up to us whether we overcome sin the hard way or the easy way. The easy way is to just not ever do it, and the hard way is to do it and then repent.

This is why the idea of a Not Even Once Club can be so alluring. Because Christ didn’t sin once, and He beat the game. He learned it all, and He never sinned. Sin is irredeemably bad–you don’t even have to sin to learn. Game. Set. Match.

I’ve been beginning to question this understanding of sin. I want to share with you quotes and thoughts that have encouraged me to re-evaluate this particular view of failure and sin. I still don’t have an alternative completely fleshed out, but let me start with a few quotes to help set the stage. The first is from creative genius Ed Catmull, the co-founder of Pixar:

[F]ailure is a manifestation of learning and exploration. If you aren’t experiencing failure, then you are making a far worse mistake: You are being driven by the desire to avoid it. And, for leaders especially, this strategy—trying to avoid failure by out-thinking it—dooms you to fail. 1

And this is from professor Tyler Jarvis in a recent devotional address at BYU:

The Lord doesn’t care about not messing up—not losing what we have. It isn’t enough to preserve what He has given us. He wants us to get up and do something with it. 2

What if sinning isn’t like getting an answer wrong on a test or putting a heavy rock into a backpack? What if it’s more like stumbling while trying to live life–a random, unpredictable, creative endeavor no matter how many rules or habits we try to build up as protection to keep things safe? Creativity dies when failure is stigmatized, and it thrives when it is embraced (not encouraged, but allowed as part of the growing process). When we are afraid to make mistakes, we live differently. We don’t take chances. We are always looking over our shoulder lest sin sneak up on us unexpectedly. We worry. We worry a lot. As child expert John Holt says, this can have some negative consequences:

A child whose life is full of the threat and fear of punishment is locked into babyhood. There is no way for him to grow up, to learn to take responsibility for his life and acts. 3

So even though sin is not to be hoped for, it should also not be feared. We should’t try to sin any more than we should aim to fail. But we should expect and embrace failure, because if we don’t fail we’re not taking risks. And if we don’t take risks we aren’t living. 4 President Uchtdorf seems to agree:

We have all seen a toddler learn to walk. He takes a small step and totters. He falls. Do we scold such an attempt? Of course not. What father would punish a toddler for stumbling? We encourage, we applaud, and we praise because with every small step, the child is becoming more like his parents.
…
I do not believe in a God who would set up rules and commandments only to wait for us to fail so He could punish us. I believe in a Heavenly Father who is loving and caring and who rejoices in our every effort to stand tall and walk toward Him. Even when we stumble, He urges us not to be discouraged—never to give up or flee our allotted field of service—but to take courage, find our faith, and keep trying. 5

The Lord can’t look upon sin with the least degree of allowance, just like a parent can’t look at a toddler’s nasty fall as anything other than painful. Sin is bad, and we should teach that it is. Just like falling down is bad. But focusing too much on falling makes it hard to take steps on our own. A culture that demonizes failure tends to kill the confidence and creativity needed to learn most fully from life. Likewise, if we go about our lives trying to survive sin, to avoid it as if it were the plague, then we will be forcing ourselves into a life where mistakes, rather than neighborly love, is the focus.

There are limits to this idea: we shouldn’t encourage people to not be afraid of murdering someone. But what if we we shifted our focus away from skirt length, movie rating, number of children, marital status, missionary referral count, doctrinal purity, ideological order, etc. and focused instead on a simple (yet profoundly challenging) charge to love God and love each other? We wouldn’t have to abandon rules or commandments, but there’s got to be a way to teach them without also instilling such a fear of failure.

For example: instead of imposing goals or inducing guilt, what if our discussions of missionary work focused on a broad foundation of love of our neighbors? Service, friendliness, charity–these are the best missionary tools in our arsenal anyway. It’s easier to not fear failure when the charge is to be loving in the best way you can. And Jesus Himself suggests this might just be the best way to bring people to Him, anyway: “By this shall all men know that ye are my disciples, if ye have love one to another” (John 13:35).

It seems to me that, in the Church, we too often have the impulse to address a problem by giving rules, laying out guidelines, or trying to explain principles so clearly that it will become guilt-inducingly obvious that people need to act differently. Here’s the problem with that: more rules = more opportunities to break rules, and in a culture where failure literally has eternal consequences people are going to be hesitant to venture away from the security of the status quo. Counter-intuitively, maybe the best way to enable obedience is to stop talking about it so much.

I don’t think I’ve done justice to the depths of this view of sin. You might disagree–maybe I’ve splashed around in a shallow puddle long enough. I hope you’ll let me know your thoughts either way below in the comments. I’ll conclude with two charts that try to lay out different ways of viewing sin’s role in our lives:

I believe these issues center on metaphors of life itself:

The ideas expressed on the left-hand columns represent significant truths about life. But so do the right-hand column ideas. When we deal with sin in ourselves and in others we should consider both columns. It makes no sense to beat ourselves or others up for doing something we were sent here to do.