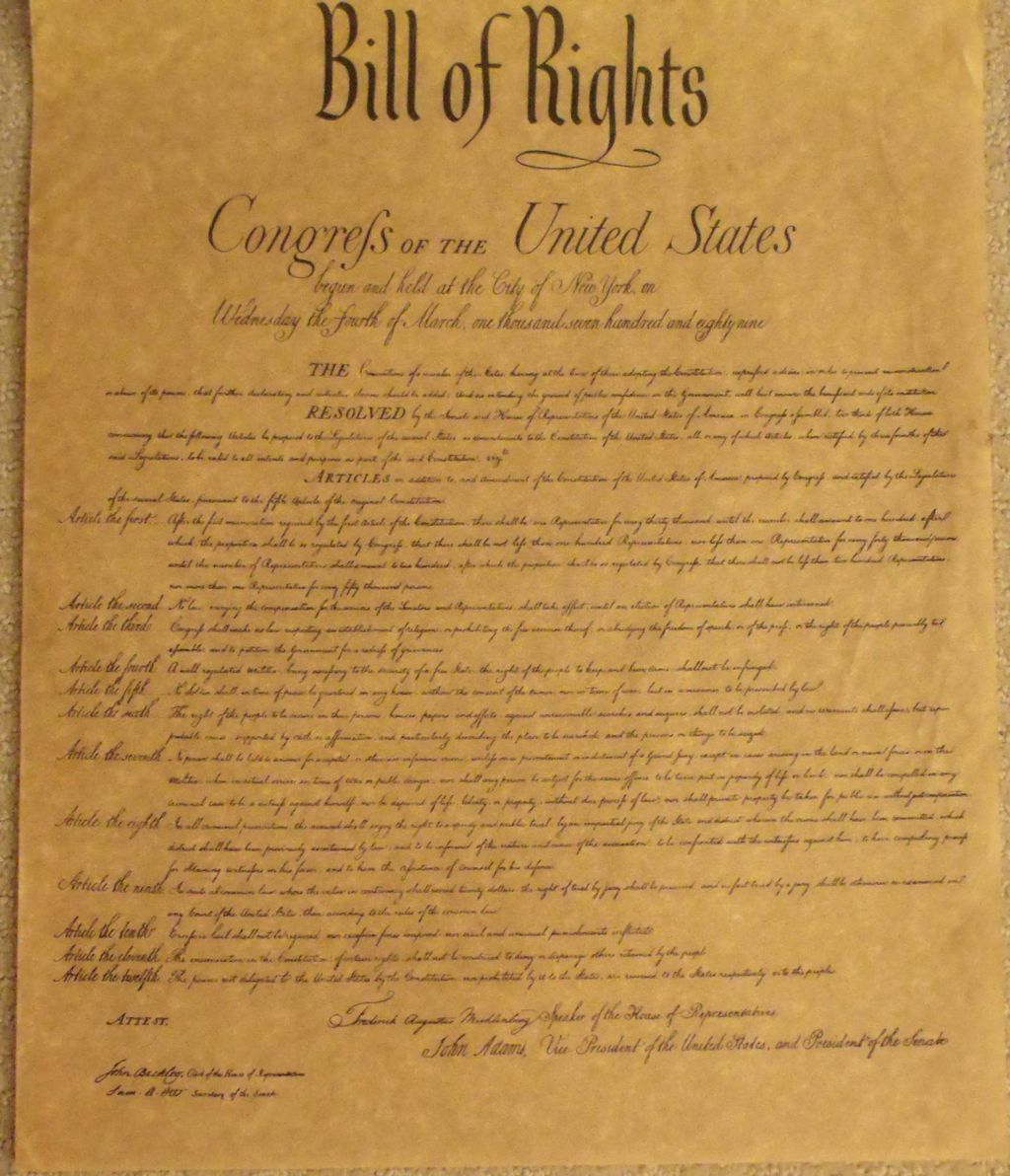 We all learned in elementary school that the Pilgrims came to America so that they could practice their religion without persecution. They were willing to put up with hardships as they left their homes and countries in order to live their religion. We take great pride in these stories of America as a haven for those seeking freedom.

The most celebrated proponent of religious freedom in the colonial era was Roger Williams. He purchased land from the Narragansett Indians, where he then set up a new colony which established religious liberty and separation of church and state as founding principals. This colony became Rhode Island which was a haven for religious minorities, which included Baptists, Quakers, Jews and others.

A century later his ideas inspired the founding fathers to include freedom of religion in the Bill of Rights as part of the First Amendment to the Constitution.

From its inception in American history, freedom of religion actually meant freedom from the dominant religions of the time. The religious refugees were escaping mainstream European and Christian religions such as the Anglican church or the Catholic church.

Stop and think about that for a minute. The first Amendment was written to protect people from forced participation in mainstream Protestantism. It was meant to protect minority religions and minority religious viewpoints from the majority.

On the flip side, there are numerous laws that actually restrict religious practice. Mormons in the late 1800’s experienced this when the federal government imprisoned church leaders for practicing plural marriage. Native Americans experienced this when they were forced to fight for their right to use a hallucinogenic drug, peyote, in their religious rituals as they had been doing for hundreds of years. Jehovah’s Witnesses experience this today when their children are forced to receive blood transfusions in life-threatening situations, as do Christian Scientists when they are forced to allow medical treatment of their children. Muslim taxi drivers in Minnesota are forced to transport people who carry alcohol against their religious objections. Muslims and Fundamentalist Mormons are both restricted from legal polygamy and from marrying under-age brides. All of these are cases where the adherents have every right to their belief, but they are restricted in their practice. The justification for these restrictions is that a religious practice is violating the rights of another person or harming society.

In the case of marriage laws, there are many dominant religions who define marriage as one-man/one-woman. However, there are several religions who define it differently and bless same-sex marriages. The irony is, if a religious freedom argument were relevant, then it would actually work in favor of same-sex marriage. The Supreme Court will never be able to justify forcing any religion to adopt a practice of performing marriages that it does not believe in. But, more importantly, if religious freedom is grounds for interference around marriage, the Supreme Court should protect those minority religions that do want to perform same-sex marriages (as well as those that don’t). This is consistent with the principles of religious liberty and separation of church and state that inspired our founding fathers to write the first amendment–in order to protect minority religions from the dominant religions. 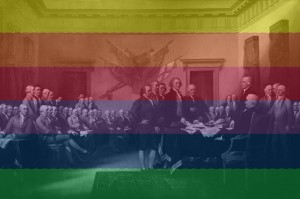 So far, religious liberty has not often been used in courts as a rationale for same-sex marriage. However, the United Church of Christ did exactly that last year in a lawsuit in North Carolina when they pointed out that their religion freedom was being restricted by the same-sex marriage ban. (This argument is now moot due to the recent Supreme Court decision.)

Meanwhile, marriage equality opponents may ultimately find that this ‘religious freedom’ argument is counterproductive to their aims.  Religious freedom will only add more weight to marriage equality. The constitution was set up to protect us from a state religion. Even if there were only one or two religions in the USA that practiced same-sex marriage they would be entitled to the same protection as all the other religions.

So my advice to marriage equality opponents is this: Don’t go there. Claiming that the definition of marriage should conform to religious definitions not only helps the case for marriage equality, but it opens the door to recognition of polygamist marriages. Our current laws restricting marriage to two adults are based on the secular observation that monogamy is better for society. The benefits to society were not found to be sufficient to prevent interracial or same-sex marriages, so the court had to eliminate those bans based on equal protection. However, the ban against polygamy does have some very strong and cohesive arguments to help justify it. These include the following:

—If practiced widely, polygamy leaves too many unmarried men, which is destabilizing for a society. Basically, the rich and powerful get all the wives, leaving a population of unsatisfied men who are motivated to disrupt the system. This is the outcome for most young men raised by fundamentalist Mormons. They handle their surplus of men by chasing away many of their teen boys, who then become vagrants with no family.

—No one fundamentally needs to enter a plural marriage. There is no primary orientation as in the case of same-sex marriage. Everybody in a polygamist marriage could enter a happy monogamous marriage that matches their orientation. Therefore, as individual rights and equal protection go, a ban on polygamy doesn’t demonstrate the same level of discrimination when compared to same-sex marriages.

—Research could determine if children of polygamist families, as a whole, are at a disadvantage compared to other children.

—Women in polygamist societies are almost universally disenfranchised and have little choice in their marriage decisions.

All of these arguments against recognizing polygamy could get trumped by a strong appeal to religious freedom. There would be a much higher standard required to show that plural marriages are really causing harm to society in order to justify a ban. I don’t think that is where the LDS Church and the evangelical Christians are hoping their fight will lead, but their own actions could help push it there.

Another factor to consider is the role religious freedom plays in different regions of the world. Consider the regions where Mormonism is thriving. North America, Europe and Latin America are all pluralistic societies that are very conducive to the growth of Mormonism. These are the countries with the most religious freedom. They are also the countries where LGBT rights and marriage equality are making the fastest advances. This is no accident. Religious freedom and LGBT rights go hand in hand. In contrast, Muslim countries, by forcing their religious beliefs into the public sphere, make the presence of Mormonism impossible. They also make the pursuit of LGBT rights impossible. Africa and the former Soviet Union are two regions where religious liberty and LGBT rights are being severely curtailed. The same forces that are making life difficult for LGBT people in Russia and Nigeria are also hurting Mormons. These are the regions where Mormons are truly at risk for persecution due to their religion. None of this is an accident. A real pluralistic society embraces genuine religious freedom which also ends up protecting LGBT people and their rights. This is beneficial to Mormons. This is beneficial to LGBT. It is a life or death matter for both communities. We need to unite and fight for religious minorities and sexual minorities in those countries where both Mormons and LGBT people are persecuted.

So remember this: freedom of religion is here to protect you from my religion, AND to protect me from your religion. Remember that we live in a country that doesn’t ban birth control or pork. We live in a country where women can walk in the streets without their head covered and can drive cars. We live in a country that does not let any religion dictate our rights or force religious practices on non-adherents. We want it to stay that way. Let’s rejoice that we live in a pluralistic society. Let’s rejoice that different religions can have different beliefs about same-sex marriage and so many other issues and that no one can force their beliefs on others. That is what religious freedom really means.

DANIEL PARKINSON was born and raised in Utah to a Mormon family with a thick Mormon Heritage. He comes to this issue as a psychiatrist, with a strong sense of activism, and a desire to help the two communities that he inherited as his birthright: the Mormon community, and the gay community. He administrates the GayMormonStories.org podcast and the NoMoreStrangers.org blog.

All posts by Daniel Parkinson