Radical Compassion: I Am All In 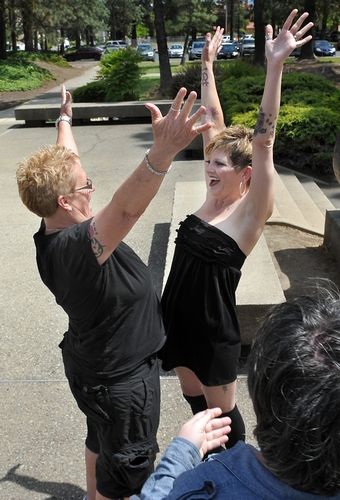 In May of this year, Oregon became one of the avalanche of states to open up marriage to all couples. I had signed up for text alerts from a news service so I’d know right away and the message came at noon—gay couples who wanted to be married could go to the courthouse and get a wedding license that very day.

Shortly afterward, I stood on the steps of the courthouse and officiated the first recorded gay wedding in Oregon. I spoke to the media and declared myself a Mormon who believed in marriage equality. In the weeks and months since, I’ve spoken at length with many people about my actions that day. Many people disagree with what I did. I’ve read comments about me, calling for my excommunication. I knew there would be repercussions of my actions, and many of my worries that day have since been realized, but I was and am unapologetic and without regret.

I’ve been asked why I couldn’t just support gay marriage, why I had to go all the way to actually officiating a wedding.

My answer is this:

When I recognize a marginalization and find it is in my power to correct it, I will not stop part way. If I believe in marriage equality, it’s not right for me to support it up until the moment I am asked to officiate and then quit my support. I am all in, all of the way. It’s why I work so hard with Mormon feminism. It’s why I support the actions of Ordain Women. It’s why I advocate for marriage equality and why I study issues of racism. It’s why I work so hard to identify my own areas of privilege and use my privilege to amplify the actions and voices of the marginalized.

From the scriptures, we know that Jesus was all in. He gave and gave until he gave his life. He sought out the sinners and the sick. When asked what he could do to inherit eternal life, Jesus told the ruler, “lackest thou one thing: sell all that thou hast, and distribute unto the poor, and thou shalt have treasure in heaven: and come, follow me.” (Luke 18:22) The ruler was sorrowful at the prospect; Jesus had asked him to be all in.

In a recent sacrament talk about charity, the speaker referred to Mosiah 7:45. This part specifically stood out to me, “And charity…seeketh not her own.”

What am I doing to seek out those who are not my own? Who are my own?

When my husband and I were just dating, we walked out of a fast food restaurant to find a homeless man asking for spare change. I was ready to give him my change and be done, but my husband took him inside, bought him a cup of coffee and sat and talked with him while he drank it. That was so radical to me at the time, but is a deed that has informed my own acts of compassion in the 24 years since.