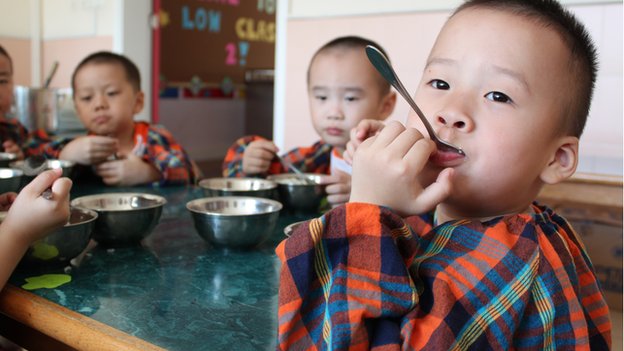 An Australian working mother and BBC reporter, Madeleine Morris, is producing a series of short documentaries on childcare around the world. She’s asking, “Who’s left holding the baby?” She began with Australian nursery, or daycare. (Unfortunately, I can’t find a link to the podcast.) Her child goes to nursery, and lots of parents really like it; however, it can cost tens of thousands of dollars a year for a family. It seems that a good daycare can avoid most of the reported negatives of daycare, and can even provide some benefits that a typical home can’t, but it’s still hard for many children and parents to be separated. It’s especially hard when children can go into daycare as young as 6 weeks old. From Australia she went to Fiji, where communal child rearing is still practiced. Children are watched over and disciplined by everyone, but are also left to play their own games and work out their own conflicts, most of the time. The Fijian children show a resilience and confidence that is attractive to Madeleine, and her three year-old joins right in with their play, but they aren’t as well prepared to deal with the particular rigors of the kind of schooling that Australian children are prepared for.

In the second installment (I hope it stays available) she visits an elite kindergarten boarding school in China. I get the impression these schools were developed for some very good reasons–for helping with orphans and for families where both parents have to work very long hours. The school that was visited evaluates applicants and encourages families to put their children in daycare only, if possible. During the day, the children seem happy. There is a lot to do, and they are helped to play and learn based on their interests, not some fixed curriculum. These programs were started many years ago. Many of the adults deal with aftereffects of feeling abandoned, and don’t know how to interact with their families. Others have adapted well, but China is largely phasing out these boarding kindergartens. The painful part was when the reporter described bedtime. Some of the children are three years old. Bedtime means lights out with 20 children and only two–admittedly loving–teachers. Most children won’t cry for even a half hour before going to sleep. That’s all. They’re resilient. Yeah.

I have a four year-old and a two year-old. They don’t go to sleep without one of their parents. We probably could have trained them to go to sleep on their own, but I’ll tell you, even if it were a good thing, it doesn’t work for everyone. As a baby, our four year-old didn’t just fall asleep after crying for 15 minutes. The times we had to set him down by himself because we couldn’t hold him, he would cry for half an hour and then throw up and keep crying some more. I want to cry just remembering. As a four year-old, he chose to stop going to playschool because he doesn’t like saying goodbye to us. He loved playschool some days. Some days he didn’t want to come home (they have a playground), but after two months of twice a week, he said he didn’t want to go anymore. Just recently my two year-old woke up early. We ate breakfast together, him sitting on my lap, but then I needed to go to work. There I was, putting on my bike helmet and closing the door on my child–the child who loves going outside, loves riding in the bike trailer, loves his dad, and has never spent more than a couple of minutes alone and awake in his entire life. I saw the tears and panic forming in his eyes. I saw the undefined sense of abandonment and questioning on his face as I closed the door between us. I was crying and doing my G-rated version of cursing in my head as I rode away. (Maybe you are getting the sense that I cry a lot. I do, recently, but it’s good for my mental health, so don’t worry.) Tying this all back in to the BBC documentaries, I agree with Madeleine Morris’s conclusions. Children are resilient, parents and families have to make the best choices they can, and lots of different choices can be good parenting. Judging parenting styles is not the point of my writing. I’m headed toward another analogy.

I find LDS theology all-consuming. I have Heavenly Parents. They shut the door between us, and sometimes I feel alone and panicked. I don’t know how long it is going to go on. I don’t know what scary things will happen while we are separated. I do trust in two things: my Parents didn’t shut the door until I chose to walk out it–until I thought I was ready to leave the garden–and my Parents cry for my pain and wish I didn’t have to feel alone and abandoned.

I’m Mormon. It’s just who I am. There isn’t a specific why. Maybe I’m not simply a member of the Church of Jesus Christ of Latter-day Saints, but the Plan of Salvation is my story. I live it, I breath it, I think about it. I struggle with it, I’m a product of it, I’m a perpetrator of it. I live the pain of separation and sin, I strive for exaltation. I believe the Gospel is everything that’s true and real (and not anything that is false or fake), and I don’t know what it means to exist outside of that. So I’m Mormon.