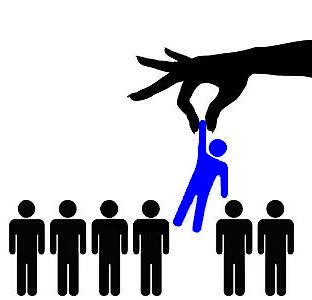 9 But ye are a chosen generation, a royal priesthood, an holy nation, a peculiar people; that ye should shew forth the praises of him who hath called you out of darkness into his marvellous light:

We have been taught that we are a chosen people.  What does that really mean?  As Mormons we are rather proud of our peculiarity, our royality, our priesthood.  We claim the blood and birthright of the children of Israel.  We claim a tradition as God’s chosen people.  But that tradition, that idea is fraught with peril.  I think a look at the history of the Children of Israel can be very instructive.

The rabbi Abraham Heschel described Israel as a great experiment in which God takes a group of people no better and no worse than any other and sees what happens when he tries to develop a relationship with them.  In other words, being chosen does not signify a preference for a people based upon discrimination and favoritism but a people chosen and approached by God. It is not a quality inherent in the people but a relationship between the people and God.  He described Judaism as “God’s quest for Man.”

As we read in the Old Testament, we find that these chosen people are typically not keeping up their end of the relationship. We are all familiar with how Israel built a Golden Calf the moment Moses left them to get the law on Mount Sinai.  We all know about how they groused and complained and spent 40 years wandering in the wilderness.  We all know about how they stoned and killed and rejected the prophets.  What we don’t seem to realize is that as “the Lord’s chosen people” all these stories are instructive to us.  They are a warning for us.

Being a people in relationship with God involves boundary maintenance.  It involves receiving the law.  It involves covenant.  It involves distinctive practices to set you apart.  These are important.  Boundaries keep the people distinct but the problem is they get confused with the end goal, the making of a better people.  The Israelites, like people in general, thought because they followed the rules, they were the good guys.  They became proud.  They were the righteous ones.  The big problem with being “the righteous ones” is a complete inability to take correction well.  Being chosen  can become the biggest obstacle in God’s quest for Man.

Enter the prophets.  Prophets are rooted in the covenantal relationship.  However, in the scriptures they are typically outsiders. They are generally outside the institutional leadership, the priesthood and come out of nowhere.  They hold the people responsible for the covenant and come out in harsh condemnation.  Grinding on the face of the poor was a common one.  They upset the status quo.  They were hated and persecuted by the chosen people.  Many were killed.  Christ himself serves as the ultimate prophet.  He roundly condemned the governing power structure as “whited sepulchers full of rotting bones”  and hypocrites.  He spoke up for the poor, the outcast, and brought comfort to the sinners who fell outside the “chosen” label.  He was killed for his effort.

So it is with so many of the prophets. Their importance was often not recognized until long after they were gone.  Once it was recognized, the people could then cluck their tongues and tut-tut their ancestors, who were clearly too blind to recognize the prophets.  What we need to realize is that no one is more prone to mistakes of the Pharisees and the children of Israel that “the Lord’s chosen people.”  The stories of these failures are not meant to make us self congratulatory.  They are a cautionary tale.  Think about it, how is it that the scriptures can be read as one long, round condemnation of the people whom God has “engraved in the palms of [his] hands?” How forlorn the Savior sounds when he asks-

37 O Jerusalem, Jerusalem, thou that killest the prophets, and stonest them which are sent unto thee, how often would I have gathered thy children together, even as a hen gathereth her chickens under her wings, and ye would not!

38 Behold, your house is left unto you desolate.

For God it seems the most difficult part of being in a covenantal relationship is the caring when we fail, when we become convinced that his caring means we are better than we are and keeps us from becoming what he wants us to be.