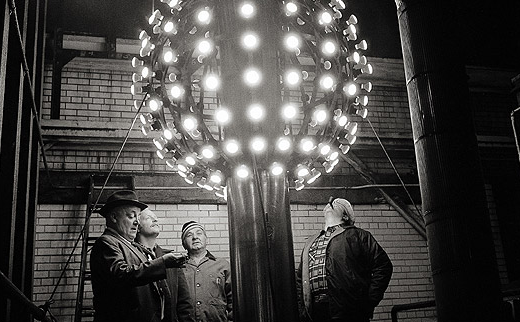 I’ve compiled a list of New Year’s resolutions for our Church! And just like me getting in better shape, these resolutions probably won’t happen; but we can hope, right? I know I’ll probably get some a lot of criticism for creating this post, but I guess I take the whole “we are the body of Christ” statement pretty literally – to me it means that we as a church (the people) can make things better. So, please actually read over my list and consider my suggestions before making any comments about how crazy I am to suggest changes. Also consider the following examples from our LDS church history which illustrate that changes are not always top to bottom, but many things are bottom up:

In 1923, however, President Heber J. Grant issued changes: shorter legs, no collar, no bow, no buttons, and shorter arms. President Charles W. Penrose of the First Presidency explained some of the reasoning behind the changes to the garment, which included:

3.  Many people questioned the formation of singles wards. This segment of the church was not started from the top. It was started in Southern California – those crazy Socal singles! Once the church leadership saw the success, and dare I say inspiration of it, they made it church wide – another grass movement – from the bottom to the top!

4.  In April of 1990 the church surveyed 3,400 members about what they felt uncomfortable with when participating in the temple ceremony. A number of changes were implemented after the leadership saw the results of the survey. Some of the changes made were regarding use of Masonic elements, violence of the penalties, and to soften the ritual’s treatment of women and non-Mormon clergy.

I fully expect people to disagree with some of my suggestions, but then again, maybe many pioneers thought that changing the garments was terrible! How can you change the garments? The younger generation, of course, welcomed the changes.

If I left a resolution out that you would like to see, go ahead and add it to the comments and we can discuss. Also, I don’t see any of these as BIG changes. The majority are easy changes that, in my opinion, wouldn’t do any harm. And I would categorize them as policy or cultural changes, no revelations or doctrinal changes needed here.  Again I want to stress how many early changes were made: suggestions were heard, dialog was created, questioned were asked, and changes were made.

Without further ado, here is the list (in no particular order):

1. Give women callings in Sunday School presidencies and other non-priesthood positions (financial clerk, ward executive secretary, etc.). Why do these callings need a priesthood holder?

4. Have women pray in General Conference. Crazy, right? In 1978 women were finally allowed to pray in Sacrament meeting.

5. Focus more on love rather than personal worthiness/obedience. If we truly love God and our neighbor, we will be caught up in thinking of others and less focused on our checklists.

6. Have Relief Society presidents attend priesthood executive committee meetings, not just ward council. Or maybe just whittle it down to one Sunday meeting (instead of the two separate meetings) and give people more time at home with their families. This is a quote from the church handbook: “As needed, the bishop may invite the Relief Society president to attend some ward PEC meetings to discuss confidential welfare matters and to coordinate home teaching and visiting teaching assignments.”

7. Have more women speakers in General Conference and have them speak to the general body of the church, not just to women, young women, or children.

8. Stop using images of Joseph reading from the golden plates in future publications. It wasn’t translated that way! (See post: How the Book of Mormon was translated.) 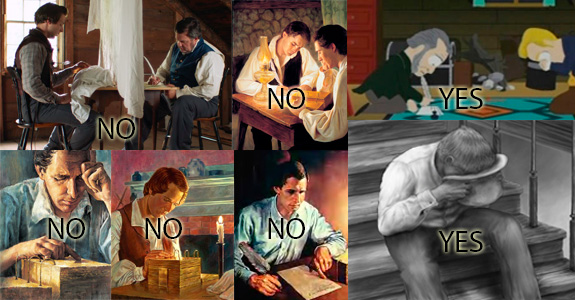 9. General Authorities should speak up on sticky issues instead of leaning on FAIR/Maxwell Institute. They have the mantle – let them speak!

11. Change dialog and attitudes about homosexuality.  The new website MormonsAndGays I believe is a baby step in the right direction. Additionally, I was going to add that the church should stop supporting Evergreen International.  “Evergreen attests that individuals can overcome homosexual behavior and can diminish same-sex attraction, and is committed to assisting individuals who wish to do so.” This kind of therapy has been proven to do harm. But as it turns out, the church has already stopped funding Evergreen! Well done! Here are some more things that we could do:

A) Make a real campaign against suicide of our young gay people that includes cooperation with secular mental health groups and the LDS social services and others.

B) Help identify factors that make mixed-orientation marriages succeed or fail and use that information in making suggestions to people who are contemplating this course based on real research that shows the chances of success. Help people who are ending mixed-orientation marriages that are unsustainable to break smoothly with less damage to both spouses and their children.

C) Nuance the message about the sin of homosexual activity. The church can give very helpful messages to its LGBT members who might choose same sex relationships. It should be emphasized that monogamy is better than promiscuity and that safe sex is more moral than unsafe sex. And young people should be encouraged to maintain their other moral values even if they are choosing same sex relations. The current system basically throws these people out without helping them develop a moral compass for the real world.

D) Really advocate for families accepting their gay and lesbian children. There is a huge problem of homeless LDS LGBT teens.

E) Make a real campaign against bullying and hate speech in our communities and in our congregations.

F) Stop all affiliation with the Boy Scouts of America unless they change their policy of excluding gays.  I realize that this would be a very big ordeal, but I can’t think of a better way to send a clear message to the world that we are changing our views towards our LGBT brothers and sisters.

G) Stop the practice of annotating the membership record of members with a history of homosexuality.

H) Stop restricting callings unless there is a current worthiness issue.

I) Stop equating homosexuality with pedophilia.

J) Start treating transgendered people with empathy. Allow them membership in the church regardless of their operative status.

K) Stop asking investigators if they have been in a homosexual relationship during the baptism interview.

12. If a General Authority publishes a book, it would be more appropriate for him to donate the proceedings to charity.

13. Require background checks for anyone that works with children or youth.

14. Teach a church history lesson on blacks and the priesthood.

15. Teach a church history lesson on polygamy/polyandry (not to include the popular “there were too many woman and they outnumbered the men while crossing the plains” bit).  I think we are missing a teaching opportunity this upcoming year as we study Lorenzo Snow. He became the prophet just nine years after the first manifesto banning polygamy came out and he had 9 wives and 42 children. This was a rough transition for the church and insight into this time period would be a great opportunity to explain why and how polygamy changed in the church. To be fair, in his timeline in the new manual it does mention him marrying two women in 1845. It also mentions him being arrested for practicing polygamy.  This is a pretty significant difference from the Joseph Smith, Brigham Young, John Taylor, Wilford Woodruff, Joseph F. Smith, and Heber J. Grant manuals, which made no mention of plural wives, even though all of them were practicing polygamists. It would be refreshing to hear about the other women Lorenzo married as well. Were those wives valued any less?

16. Stop the conflation of marriage and temple sealings. They are two separate things. Encourage a wedding outside the temple for everyone to celebrate, then have a sealing afterwards. This would be more inclusive, especially for families that aren’t all members. And then when couples do get sealed, they can really focus on the temple. Joseph Smith said: “All marriages in this church of Christ of Latter Day Saints should be solemnized in a public meeting, or feast, prepared for this purpose…” (Rules for Marriage presented in General Conference in 1835 and voted on by the whole membership). This was subsequently included in the original Doctrine & Covenants Section 109 and then later removed (but not by Joseph).

17. Provide better training for teachers, speakers, and leaders. It is difficult when the local leadership is all volunteers, and I think this would prove beneficial.

21. Provide better temple preparation. Explain what actually happens in the temple and why. The temple is something totally different from what we do anywhere else in the church. We can and should talk about it outside the temple if done in a respectful way.

22. Admit when we are wrong (i.e. blacks and racist policies).

23. Shorten sacrament meeting. Please. Do you hear me fellow families with kids????

24. Let service missions be an alternative option to proselyting. If someone doesn’t feel comfortable preaching the gospel, why not have an option of doing a service-type mission. The world needs plenty of service, that’s for sure!

C)  A talk in General Conference stating that disbelief is not a good reason to divorce your spouse or reject your children, but that the bonds of love and family should be greater than Church activity or affiliation. – Suggested by Jared Anderson

D) Give full transparent financial reports. The LDS church stopped doing this in 1959. – Suggested by Chris

F) Have the Word of Wisdom return to being a suggestion like it originally was intended in Section 89. “To be sent greeting; not by commandment or constraint, but by revelation and the word of wisdom, showing forth the order and will of God in the temporal salvation of all saints in the last days” If not, let us know why we can drink Red Bull and other energy drinks that have NO health benefits and can’t drink coffee or tea which have a lot of health benefits.

G) Better support for divorced members of our church. I don’t know what needs to be done there, but I get the feeling that they are branded as damaged goods.

H) Better support for singles, especially singles above the age of 30.

I) More concern about the individual than the organization in other words, Leave the 99 to look for the 1. – Suggested by Jesus

L) Never hold academic records or transcripts of a student who is forced out of BYU for honor code violations or because they have converted to a different religion. Let that student finish up his/her academic career at BYU even though his/her belief system has changed.